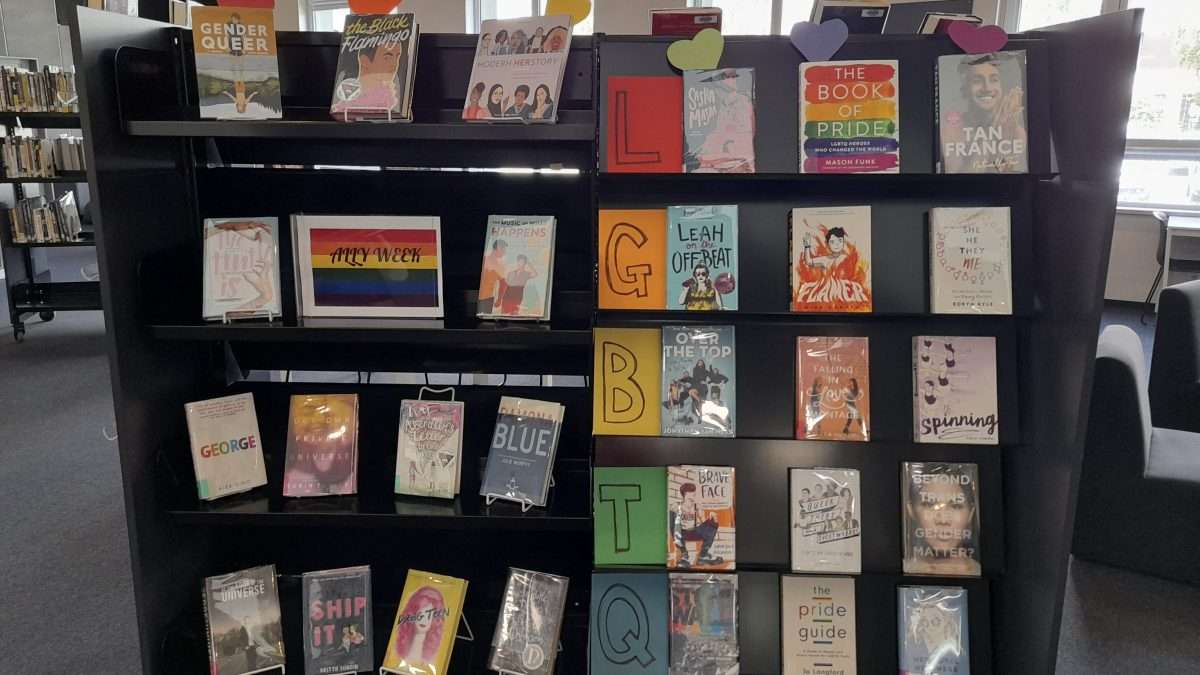 AISB librarian Cristina Cuzuc has continued to add more LGBTQ+ titles to our library collections this year, and has recently created an Ally Week display in the secondary library (shown above).

“Whenever we read books, we identify with the characters, make our own connections with the stories, and discover we are not the only ones struggling in life,” says Cuzuc. “Our students should be able to find books that portray real lives, with real LGBTQ characters who struggle with coming out or embracing their gender identity.”

Cuzuc has created a list of available LGBTQ+ literature here, in this Destiny collection. She says this is a great start to see popular titles, but encourages students to stop by before summer break for a full range of options. Below are some of the newest additions to the AISB library:

From Goodreads: “Alex feels like he is in the wrong body. His skin feels strange against his bones. And then comes Tracy, who thinks he’s adorably awkward, who wants to kiss him, who makes him feel like a Real Boy. But it is not quite enough. Something is missing.

As Alex grapples with his identity, he finds himself trying on dresses and swiping on lipstick in the quiet of his bedroom. He meets Andre, a gay boy who is beautiful and unafraid to be who he is. Slowly, Alex begins to realize: maybe his name isn’t Alex at all. Maybe it’s Sasha Masha.”

LGBTQ poet and performer Dean Atta creates a coming-of-age verse novel about identity and the power of drag.

From the author’s website: “Michael is a mixed-race gay teen growing up in London. All his life, he’s navigated what it means to be Greek-Cypriot and Jamaican—but never quite feeling Greek or Black enough. As he gets older, Michael’s coming out is only the start of learning who he is and where he fits in. When he discovers the Drag Society, he finally finds where he belongs—and the Black Flamingo is born. Told with raw honesty, insight, and lyricism, this debut explores the layers of identity that make us who we are—and allow us to shine.

This heartfelt lesbian rom-com written by YA author Ciara Smyth is the perfect summer read for hopeless romantics.

From Amazon: “Seventeen-year-old cynic Saoirse Clarke isn’t looking for a relationship. But when she meets mischievous Ruby, that rule goes right out the window. Sort of.

Because Ruby has a loophole in mind: a summer of all the best cliché movie montage dates, with a definite ending come fall—no broken hearts, no messy breakup. It would be the perfect plan, if they weren’t forgetting one thing about the Falling in Love Montage: when it’s over, the characters have fallen in love…for real.”

Vietnamese-American cartoonist Trung Le Nguyen illustrates this beautiful graphic novel, depicting what it’s like to come out to your family.

From Goodreads: “Tiến loves his family and his friends…but Tiến has a secret he’s been keeping from them, and it might change everything.

Real life isn’t a fairytale…But Tiến still enjoys reading his favorite stories with his parents from the books he borrows from the local library. It’s hard enough trying to communicate with your parents as a kid, but for Tiến, he doesn’t even have the right words because his parents are struggling with their English. Is there a Vietnamese word for what he’s going through? Is there a way to tell them he’s gay?”

Award-winning author and artist Mike Curato uses his own experience as inspiration for his debut coming-of-age graphic novel.

From Amazon: “I know I’m not gay. Gay boys like other boys. I hate boys. They’re mean, and scary, and they’re always destroying something or saying something dumb or both. I hate that word. Gay. It makes me feel . . . unsafe.

It’s the summer between middle school and high school, and Aiden Navarro is away at camp. Everyone’s going through changes—but for Aiden, the stakes feel higher. As he navigates friendships, deals with bullies, and spends time with Elias (a boy he can’t stop thinking about), he finds himself on a path of self-discovery and acceptance.”

Do you have any LGBTQ-themed book recommendations? If so, drop a comment below!

The Evolution of Romania's Orphanages: How NGOs are fighting against a history of institutionalization