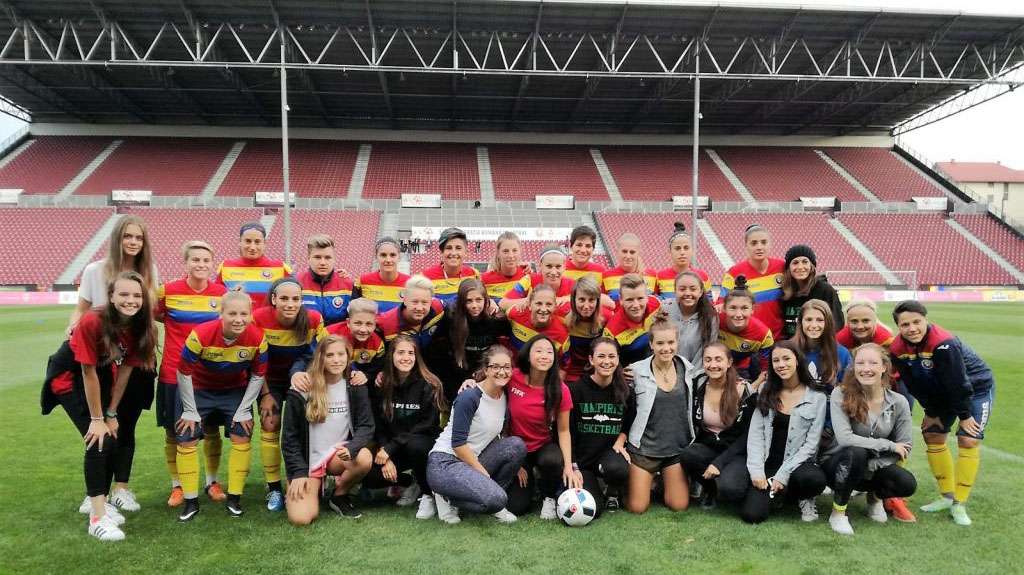 Coming from a sporty background, I have played football almost all my life; but until recently, I had never played against a professional team, nor watched a women’s national team play.

A couple weeks ago, all that changed.

The AISB Vampires varsity football team experienced a great opportunity, given to us by Olympia Cluj. We experienced football from an entirely different perspective while playing against a champions club team of Romania and watching how aggressive women can be. Here’s a breakdown of our experience:

The trip started Sunday morning, where the 18 of us departed from school at 7 AM. The bus ride from Bucharest to Cluj lasted around 9 hours, stopping only twice for lunch and bathroom breaks.

In the evening, we took a walk and had a team building activity, where we learnt more about our teammates.

On Monday, we had an early breakfast to get ready for our first practice at 10. The practice was located at Baza Sportiva Unirea, one of the football pitches close to the hotel. The goal of the practice was to work on keeping possession of the ball and work on our finishing.

In the afternoon, we had our first match against the Under 17 and 15 Olympia Cluj. Despite the loss of 10-2, there were moments of the game where we were setting the pace, and constantly putting pressure on the ball. Overall, It was a great learning experience and a great workout for the team.

In the evening, we watched the Romanian women’s national team practice where we got to take a picture with them, and watch their amazing ball control and pace.

On Tuesday, we woke up early and walked around the old town of Cluj. We saw a lot of beautiful architecture and sculptures.

Later in the day, we had an intense tactical training, where we went through all our plays and talked about the upcoming game.

In the afternoon, we played the same team as the day before, so we as a team were more organized and confident, which led us to a better result. The overall result of the match was 9-3.

Later in the evening was one of the top highlights of the trip; we went to see Romania vs. Italy women’s World Cup qualifiers. Italy beat Romania 1-0.

On the last day, we left Cluj at 8am to travel back home for 9 hours. The trip was very exhausting and fun, but overall was a great learning experience for the whole team.

Where the team is now

The overall goal of this trip was to learn and experience what it’s like to play against a really well organized team, and to treat each other not only as friends, but as a family. Playing against Olympia Cluj helped us develop many different skills; we learnt how to be more confident with the ball, to not rush our decisions, and to control the ball.

“The game brought us together as a team because we learnt how to accept failure, which brought us closer as a team since it showed that we could be there for each other, even when the situation is not positive,” said Milana I, the captain of the varsity football team.

This trip was a great learning experience for everyone. By watching women’s football at a professional level, we were inspired. We’re able to take those skills we saw and implement them into our practices and matches. The whole trip made us not only better players, but better friends.