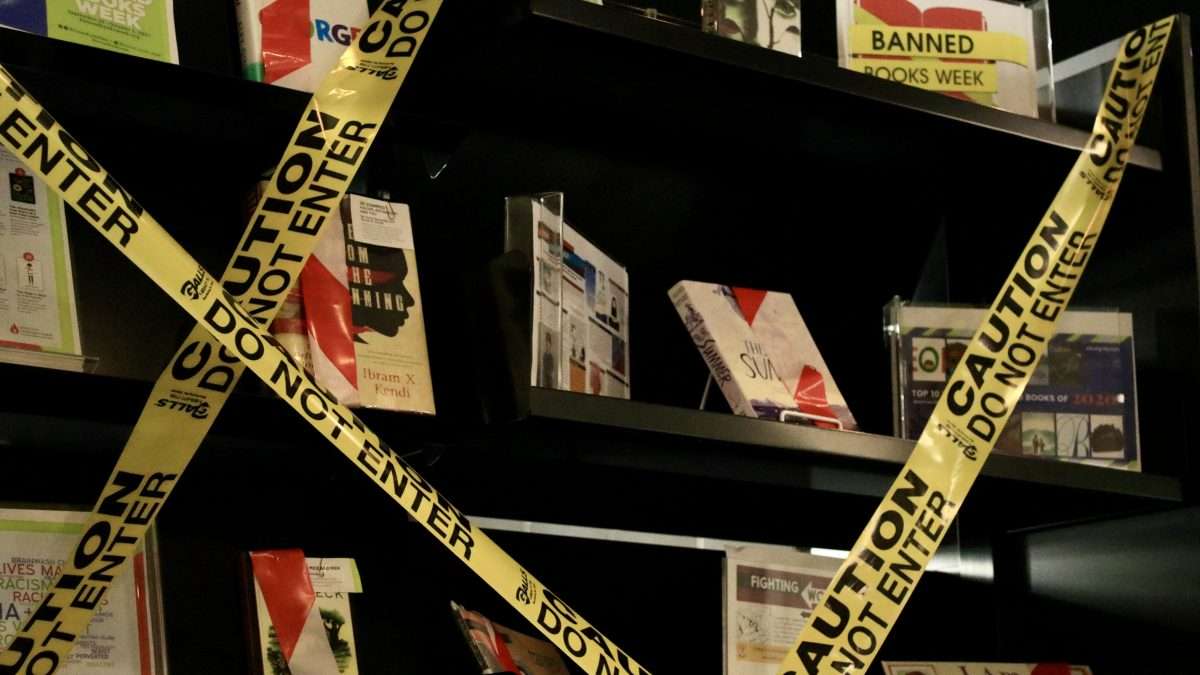 Did you notice books wrapped in black when you walked into the AISB library last week? You may not know it, but reading material gets banned from libraries and schools all the time (even classics like The Adventures of Huckleberry Finn, the Harry Potter series, and The Catcher in the Rye.

Every September since 1982, Banned Books Week has attempted to shine a light on the freedom of expression and to raise awareness on censorship. With the aim to promote discussion, we thought it was fitting to sit down with the AISB librarians for a chat. Here’s what they had to say:

Before a book is banned, it has to be challenged. And this happens when someone says that it is “inappropriate” or it simply should not be on the shelf. Because of this, “a lot of books are challenged and then the book goes through a process, where basically the person who has challenged the book needs to read it from cover to cover,” explains AISB Secondary School Librarian, Traci Marlowe. “Then, they need to demonstrate why the book shouldn’t be on the shelf.”

A book is considered “banned” when people can no longer access it. Marlowe says part of why this practice is so dangerous is that “anyone could challenge a book. It could be your parents; it could be a teacher, an administrator.”

Marlowe says that it’s important to take note of what type of content is being banned. “There must be some ideas in the book worth reading and thinking about. Interestingly, last year the top ten banned books were LGBTQ+ themed. So it’s always interesting to see over the years what gets banned and what doesn’t. But I think it’s important to read them because they’re awesome books and we need to be sure that we’re exercising our freedom–not letting censorship win,” she explains.

The Effect of Banning Books

As far as we know, there have not been any banned books within AISB. Marlowe believes that it’s important to be able to judge for yourself, whether or not you should read a book.

“We need to learn to think critically, instead of having someone else filter it for us.” She also says that “when someone starts limiting that access of information, then it becomes very controlled and authoritarian. We need a diversity of thinking and opinions.”

What Triggers a Challenge on a Book?

Marlowe finds that sex, drugs and language are often the main reasons for a book to get challenged. “But it could be other things too; the book might contain political messages that people don’t agree with.”

A dystopian novel by Cory Doctorow, called Little Brother, caused huge controversy in Florida a few years ago. “The whole point of the book is that the children rebel against the government and it became this movement,” says Marlowe. “This book was chosen by English teachers to be read in their classes, but when the principal read it and didn’t like the political messages in it, he banned it. So, Cory Doctorow made it free electronically and sent copies to the school for free, and did like this whole video, talking to the students about how important it is not to censor it.”

“Fiction is an escape, but deep down are meaningful ideas.”

The Hate U Give by Angie Thomas, is a book that Cristina Cuzuc, the AISB Secondary Library Assistant, has found had a big impact on her. “The Hate U Give is not only related to what is happening in the news, but also you can feel the pain of the characters. Those kinds of books can start deeper conservations. Fiction, in the end, is an escape, but deep down are meaningful ideas.”

From the Shelf onto the Stage

When Marlowe sent out a request for teachers to talk to their students about banned books, she was not expecting what DP Theatre Teacher Jennifer Lawless had in mind: impromptu skits, performed in front of classes, to express the importance of the freedom to read.

During AISB’s own Banned Book week, students asked to enter classrooms so they could read a passage from an outlawed book. Just before they reached content or language that was “offensive,” a group of students dressed up as police officers would “arrest” the individuals that dared to read these Banned Books. “It was supposed to create a discussion within the classroom. And we hoped to get a reaction from the students,” recalls Lawless.

Books that were read to these classes include: Forever, by Judy Blume; What My Mother Doesn’t Know, by Sonya Sones; and Running with Scissors by David Sedaris.

Tell us: What are some ‘Banned Books’ that you have read recently? Recommendations are welcome below!

Details on Next Week's Spirit Week

Tips on How to Work/Study from Home While Distance Learning