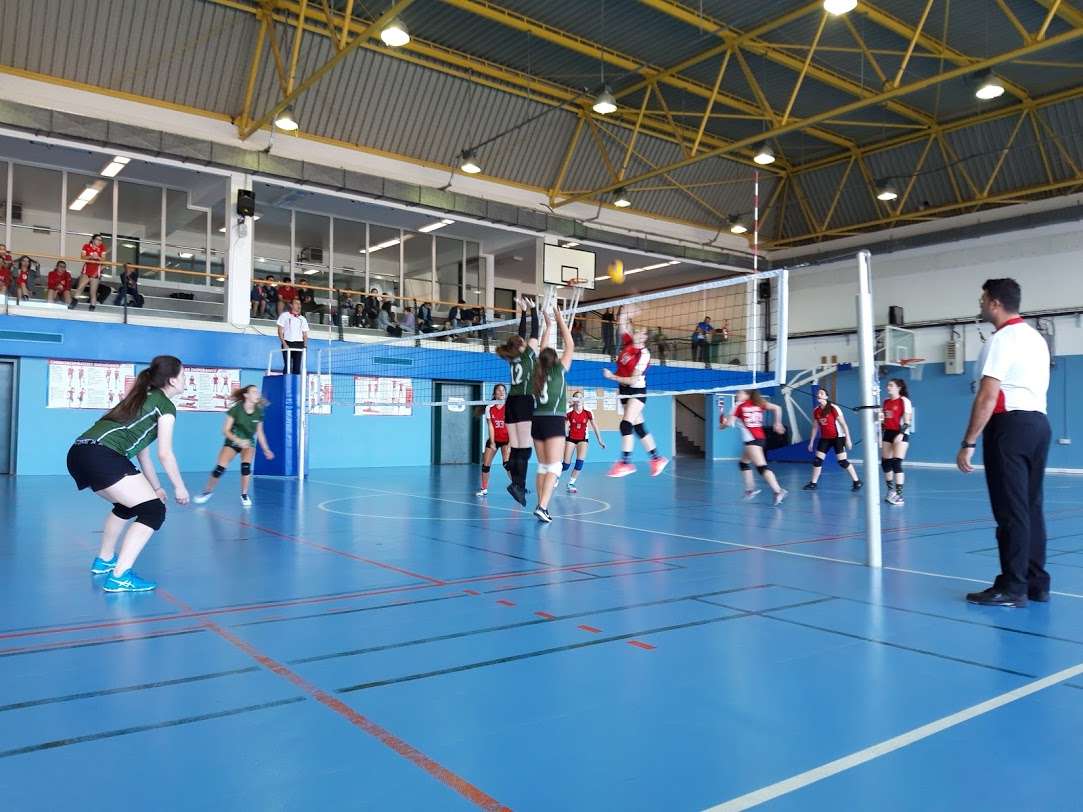 Last month, after three months of practices, the high school girls varsity volleyball team headed to Istanbul, Turkey for this year’s CEESA tournament. This was was their journey.

Getting Ready for CEESA

The varsity season started off by selecting 10 girls to be part of the traveling team that would participate in this year’s CEESA tournament, led by Coach Maci and “JaeMoney,” also known as Ms. Shock.

Throughout the season, the team managed to have a strong trend of improvement, mostly concerning consistency of serves, transitions on the court, and overall strength in hits, passes, sets, and blocks. 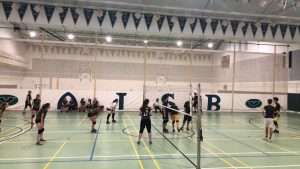 “This year’s season, I felt like we had a strong relationship in the team, where nobody was left out and everybody was friends with one another, which just made our team so much stronger,” says Co-Captain Jillaine. “We didn’t start off as the strongest, letting simple mistakes happen and letting ourselves mess with our own heads; however, we worked on that together, as a team.”

The girls also had the opportunity to play local club teams and the high school boys team on a few occasions as valuable practice for CEESA. Each game was a chance for the team to learn from mistakes and successes, and continue to persevere as the tournament date grew closer.

“For me as a coach, it was fantastic to ‘move up’ to the varsity team, along with some of my JV players from last year,” says Coach JaeMoney on her experience with the team. “It was an incredible season of growth all the way around. Working with Coach Maci who knows so much about the sport and how it is played at the national level in the US really benefited all of us. Due to her volleyball expertise, I was able to concentrate on the logistics of team bonding events, local matches, uniform ordering and such.” 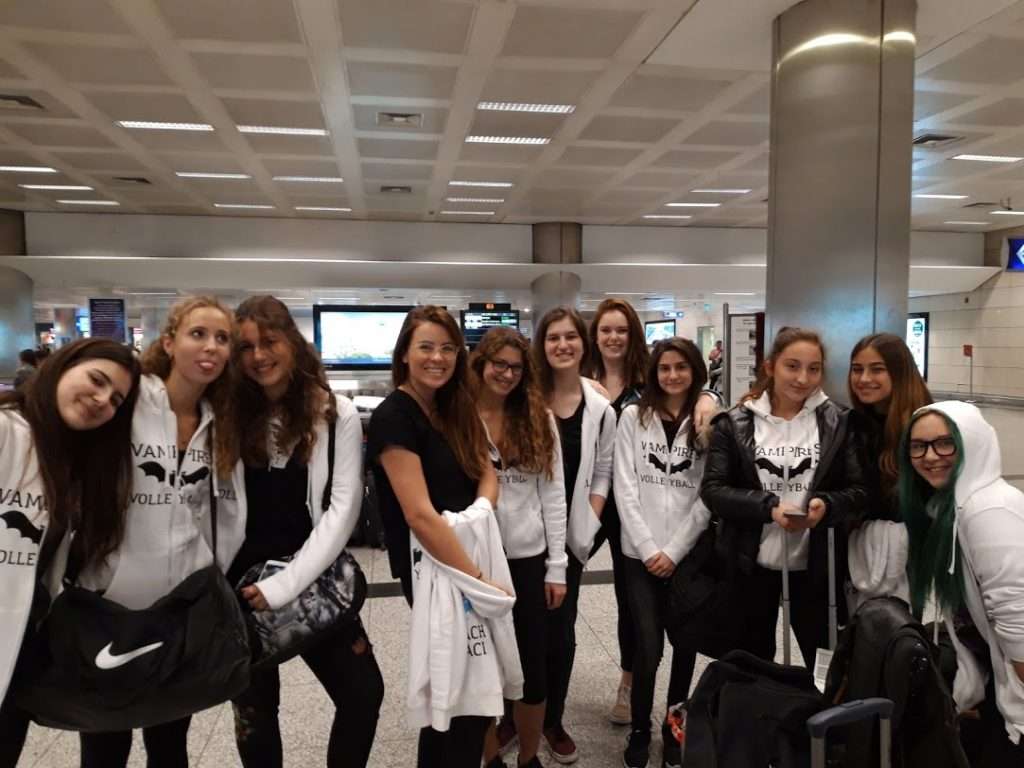 Arriving in the city of Istanbul, we had little time before we headed off to the school where the first game of many would take place.

All of the seven teams participating in the tournament first played in a round robin, where we were ranked against the Moscow Penguins, Warsaw Warriors, Prague Falcons, Baku Titans, Budapest Blazers, and the Istanbul Dolphins.

The first team the Vampires faced was the Moscow Penguins. A strong effort from both teams shone through on the court, but unfortunately, after the tiring day and match, we lost to Moscow 2-0. After the disappointing loss, the team left the gym to recharge and come back stronger for the second day of the tournament.

The following day, we came in with higher spirits as we went on to win two games against Budapest and Baku, along with one loss to Prague. With more confidence gained in the second day of play, we were ready to fight.

Our last day of playing was filled with growing nerves and bubbling emotions as we got ready to play for a spot in the 3 vs. 4 game. The first game of the day against Warsaw was a key component in deciding how far we could place. 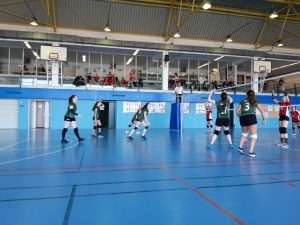 The crucial game started off rocky for the Vampires, with Warsaw keeping a consistent lead of 5 points. The Vampires caught up, but the game went back and forth for the rest of the set. Eventually, the Warsaw Warriors took the set and lead, 1-0.

The second set mimicked the first as the score went back and forth between the teams, as both brought on consistent and strong serves, hits, and blocks. Unfortunately, this was not enough for the Vampires, and we heard the whistle that signaled the end of the game and Warsaw’s win, 2-0.

The team’s second-to-last game was against Istanbul, one of the strongest teams at CEESA. Though we brought a strong game and were able to shake off the loss against Warsaw, the Vampires lost to the Istanbul Dolphins, 2-0.

The day didn’t go as successfully as the team had planned, having lost chances in playing for 3rd and 1st  place, yet after learning that we would play Budapest once again for 5th place, the Vampires regrouped and got ready for our last game.

This game would also happen to be the tightest, which meant the Vampires had to play like never before, as the first set was taken by Budapest. With one set down for the Blazers, and only one more needed for them to win the game, the Vampires were under pressure. Once the second set started, the team managed to pick themselves back up and continue a series of points where we eventually gained a significant lead, ultimately winning us the second set. This meant both teams were going to a determining final set to 15 points, where a win by two points would be necessary.

After continuous rallies between the two teams and another constant back-and-forth, the Vampires finally scored the point that won us the game, resulting in an eruption of cheers throughout the gymnasium. With the Vampires winning the game, and the final set going to 16-14, the team finished in 5th place.

The other top team standings were as follows: The Moscow Penguins in 3rd place, the Istanbul Dolphins in 2nd place, and the Prague Falcons as champions of 2018 HS Girls CEESA tournament.

After the tournament wrapped up, the team’s captain, Betty, was able to share a few words about our experience at CEESA.

“Everyone played so well throughout the whole tournament. You could see just how well we played as a team, skill-wise, but also communicating, backing each other up, cheering, and most importantly, not ever giving up on a point. I think we nearly gave our coach a few heart attacks during those games, but I’d like to think we made them proud, and would like to thank them for the best season we could have had.”

Looking Forward to Next Year

Though volleyball season may have finished, the team is already discussing plans for next year.

“I can’t wait for next season to begin!” says Coach JaeMoney. “It was an incredible season of growth all the way around. “Traveling along to Istanbul was an unforgettable experience; witnessing the intensity of a CEESA tournament first hand was mind-blowing. I gained a new admiration for each of our girls for their efforts, both on and off the court.”

For three of us, this was their last volleyball season and CEESA tournament, as at the end of of the school year they will be graduating AISB and moving on to write new chapters of their lives.

“I’m not alone in knowing that I will miss this team and am so glad I got to be a part of it,” says Captain and senior, Betty. “At first, I wasn’t going to join the team because I knew this year would be hard, but I am also so glad I did. Volleyball is by far my favorite sport, and this year I got to be reminded just why I love it so much. It’s not just my love for the actual sport, it’s the team. Struggling together through practices and conditioning. It’s the improvement you start to see in every single player as the practices go by. It’s playing the best volleyball we can.”