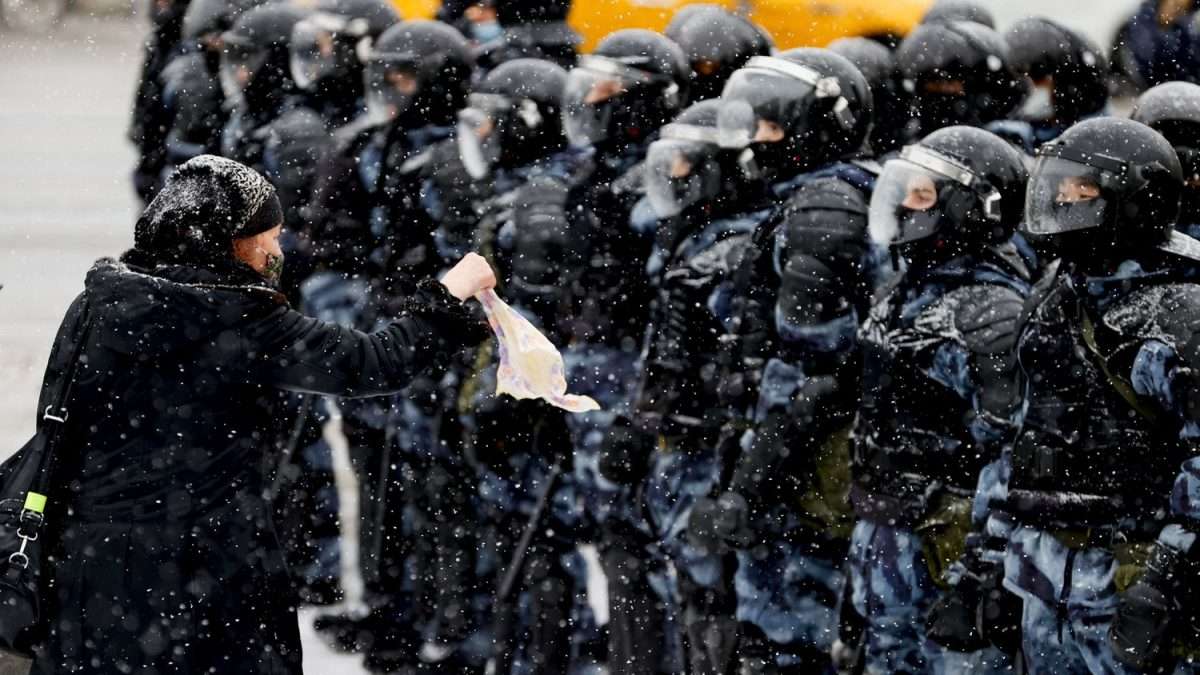 Russian woman waves her handkerchief, as a sign of peace, to the police, during the Russian protests; Sefa Karacan / Anadolu Agency / Getty

In January, an estimated 40,000 people gathered in the streets of central Moscow, protesting against the jailing of Russian opposition leader, Alexei Navalny. In the months since, thousands of demonstrators have been arrested by riot police, and Navalny went on a 24-day hunger strike—only fueling tensions and outrage.

A little over thirty years ago, a similar situation unfolded in Romania. After 21 years of living under a tyrannical dictator, Nicolae Ceaușescu, citizens were impoverished and oppressed. Protests demanding an end to communist rule spread throughout the country, and eventually ended with the execution of Ceaușescu and his wife on national television.

With Russian protests demanding an end to a similarly autocratic government, can we predict a similar outcome to Romania’s revolution?

As we begin to unravel the timeline of the protests in Russia, it is essential to identify Alexei Navalny as one of the key characters involved in the events. The 44-year-old Russian lawyer has been an opposition leader for over 20 years, protesting against the governing party and its ways. In 2018, he refounded “Russia of the Future,” the main Russian political opposition party, and has run for public positions such as the mayor of Moscow.

“Gandhi did it in his day, as did Martin Luther King…Humanity has this historical experience of fighting injustice and tyranny.” —Navalny on his activism.

Navalny became known on an international level when he was left in a coma in August of 2020, poisoned. Shortly after, he was transferred to a hospital in Berlin, where he received treatment and recovered. The reason for his hospitalization was attributed to a Novichok agent poisoning (a lethal poison developed by the Soviet Union and Russia between the 1970s and 90s). Navalny’s battle with Putin, the current Russian president, became deeply personal when he accused the leader of ordering the attack.

Although heavy and serious, many have supported Navalny’s accusation, pressing countries and organizations to take the necessary sanctions against Russian officials. Therefore, when NATO (North Atlantic Treaty Organization) urged Russia to offer a transparent and just investigation into Navalny’s poisoning, even greater importance was brought to the issue. It was considered a threat to global security, as it breached international laws regarding the use of any chemical weapons.

Yet, after regaining his health in Germany and planning his next moves, Navalny returned to Moscow on the 17th of January. He was immediately detained by the police and taken into custody, triggering protests all over Russia. Then, when he was sentenced to two-and-a-half years in jail on February 2nd, even more people gathered on the streets. The sentence was due to the violation of his parole from a 2014 case, which was deemed, at the time, as “arbitrary and unreasonable” by the ECHR (European Court of Human Rights).

The protests took a violent turn when the police acted with force on the crowds. A few thousands were then arrested and detained for participating in the gatherings, as the violence spread. This, in combination with the lack of immediate results that could be obtained, meant that protests died down. However, the fight didn’t end there, with Navalny now recovering from an almost month-long hunger strike. Even though he is still jailed, his team has continued to fight for his release, even organizing large rallies last month, in an active call to the government.

A look at the Romanian Revolution: Why did it succeed?

In Romania, after more than 40 years of the communist rule, in mid December of 1989, people began gathering on the streets of the city of Timișoara. They expressed their dissatisfaction with the government and its actions and were fighting for the fall of the communist regime. The similar shifts of power in neighboring countries set the stage for the Romanians, bringing hope of real progress.

After the protests began in Timișoara, they quickly spread throughout the country in cities like București, Sibiu, Cluj-Napoca and Brașov. And on December 21st, when Nicolae Ceaușescu, the former communist leader of Romania, attempted to deliver a speech to a crowd in Bucharest, it was clear a revolution was in the works.

What followed was a violent fight between protestors and Romanian officials, as they began using military force on the crowds.

AISB Romanian Teacher Ioana Nanu recalls that night, when her father got home from work. “He came in, crying, I remember clearly,” she says. “He was so impressed [by] what he had seen on the streets.”

The next day, on December 22nd, more than 100,000 angry protestors gathered outside the Communist Party Headquarters and forced their way inside. It’s suspected that the army refused to hold back the mob and that Stănculescu, the Minister of Defense, took the protestors’ side, but he’s since refuted this fact. Regardless, Romanians found power in numbers and Ceaușescu fled the city by helicopter.

Could the same thing happen in Russia?

Although there are considerable differences between the Russian protests and the Romanian Revolution, understanding the “successes” Romanian protestors experienced 30 years ago gives us an idea of what could happen in Russia if opposition activists continue to mobilize.

It becomes clear, as we begin to think about the parts of an uprising, that there are two distinct stages that need to be achieved in order for it to result in change: outrage among a large group of people, and a calculated opposition. Real change begins when people refuse to be silenced any longer.

Amplifying the voice of the people into real change is the step that naturally follows. In the case of the Romanian Revolution, the army’s refusal to follow Ceaușescu’s orders ultimately overthrew the government. Yet, apart from that possibility, how else can change be materialized?

Although not the case in most movements, the Russian protests have a very clear face: Navalny. As mentioned before, the opposition leader has a strong team of people backing the movement, along with a political party. So, if there was a moment where the Russian government were to collapse, the opposition would be ready to step in. This is one of the things that could ensure success, as it would offer an alternative to the current government, dodging the chaos which would otherwise unfold due to a lack of structure.

Additionally, Navalny plays the role of a public inspiration, something that most protests, including the Romanian Revolution, lacked. As he has proved time and time again, his courage seems limitless and he is willing to risk everything for what he believes in.

Many have asked themselves why he came back to Russia when he knew he would be arrested. AISB Humanities Teacher Joshua Giddens puts it simply: “If you want to change things, you have to be willing to take a blow.”

For Giddens, Navalny appears like a revolutionary, a modern-day Gandhi. And, for Russian people, having such a clear leader may bring hope and, consequently, a more calculated fight.

Media: A blessing or a curse?

Although we may be inclined to believe that the media didn’t have a big role to play during the Romanian Revolution, historians argue that it was one of the determining factors in triggering change. However, the defining element of a totalitarian regime is that it monopolizes the economy and, therefore, all of the media. So, how did the Romanians of 1989 stay in touch with what was going on?

Apart from the controlled television shows prepared by the government, it is estimated that 70% of citizens over 15 listened to “Radio Europa Liberă” (Radio Free Europe). A foreign radio station, it streamed shows in Eastern Europe and was supported by Voice of America, BBC and DW/DLF.

They began covering the events in Timișoara, gathering valuable testimonies that slowly revealed the bigger picture. Seeing the brave acts people were beginning to take, Romanians all over the country gathered their courage and joined the movement.

So, if the media was so powerful 30 years ago, its effects now, in an era of digital communication, could be even greater.

Therefore, it comes as no surprise that once Navalny posted the “Putin’s Palace” documentary, about the Russian President’s alleged $1 billion Black Sea Coast residence, the millions of people that watched it were even more determined to continue the protests and turn up in larger numbers. This proved that one of the greatest powers of social media remains the ease with which information is spread, reaching millions.

Ultimately, social media manages to trigger the first part of the change, where people begin to speak up. However, what draws people in, the feelings of involvement and purpose, are, paradoxically, what stunts a movement’s growth.

Yes, social media ensures that information reaches many, but it produces an army of individuals. Everyone becomes their own small leader, involved in the movement, but not truly invested in fighting for the change. As an initiative loses its momentum, people disperse, leaving back the few who had always been there. So, in reality, although social media is a double-edged sword, its value should not be disregarded.

As the movement in Russia evolves, seemingly without measurable results, we have to remember that not all forms of success look the same and that progress is built gradually. Only when we acknowledge that the doorway towards change is in front of us, can we begin the fight.

'I thought we were going to die': AISB Teacher Delia Țugui shares her personal experience from the Colectiv nightclub fire

Architecture in Bucharest: How Beauty Fades Away

A Look at How Emojis have influenced the English language