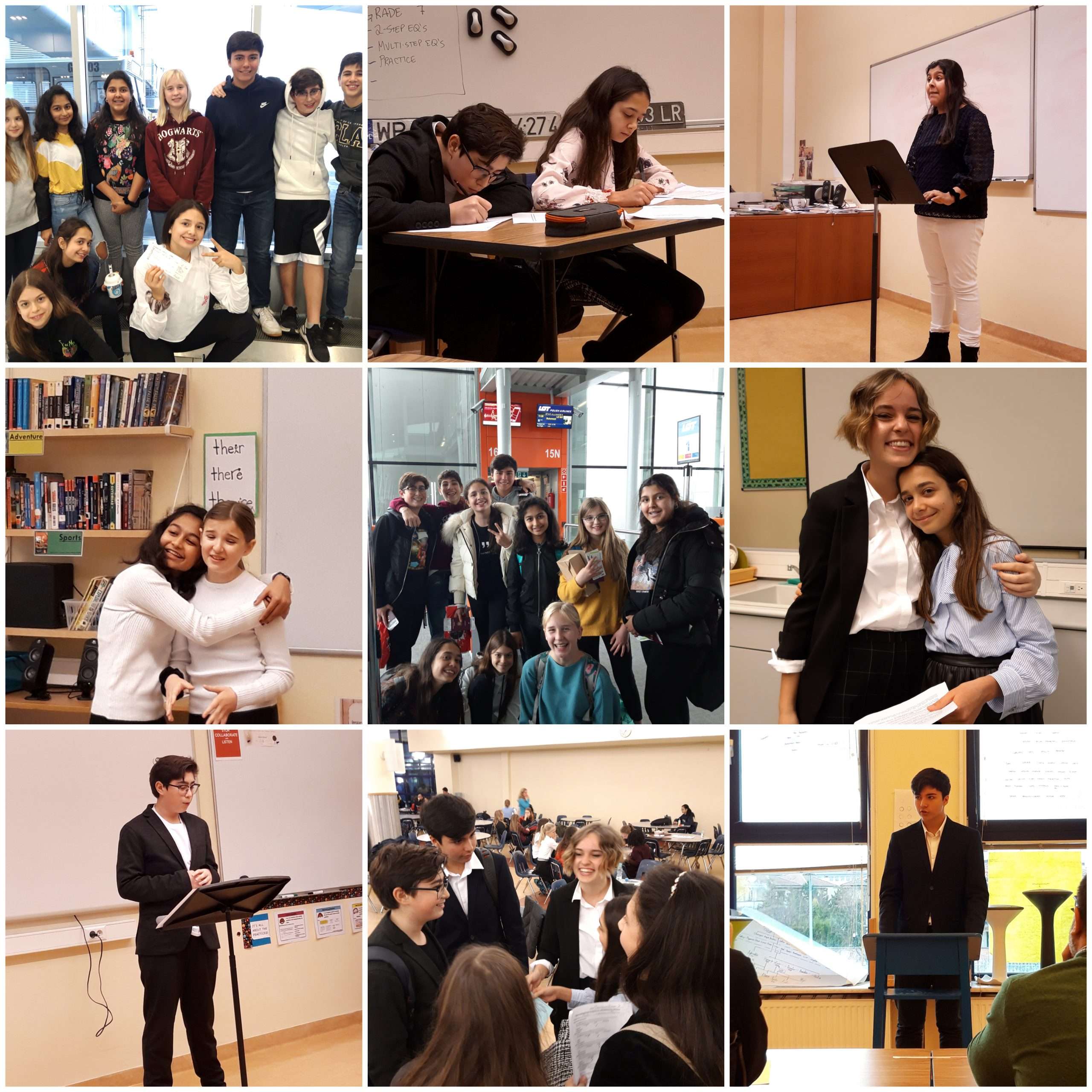 For the Speech and Debate team members, this year was full of hard work and well-deserved accomplishments. Just recently, the high schoolers returned from a successful CEESA trip in Prague, following the middle schoolers’ exciting experience in Warsaw, back in November.

To get a better understanding of the students’ experiences, The Bite sat down with High School Speech and Debate Coordinator, Cristina Cuzuc, as well as several middle and high school members. Here’s what they had to say.

What Speech & Debate is all about…

Joining Speech and Debate helps you form coherent arguments, improve your reasoning, and gain the confidence to speak up and express your point of view. You also get the chance to explore light and heavy topics and develop a versatile thinking process.

“Speech and Debate is evolving around communication, and how you can be a better communicator in this world.”

It’s structured in such a way that participants explore various ways of effectively communicating through Debating, Impromptu, Oral Interpretation, and Original Oratory, on a variety of randomly selected themes.

For Debate, two-person teams speak on the positive or negative side of a resolution released at the beginning of the season. This year’s resolution was “violent civil disobedience can be justified.”

As the name suggests, for Impromptu, team members receive two prompts, and must give a three-minute speech on one of them. They only have 90 seconds to prepare their speeches from the moment they see the prompts.

During Oral Interpretation, members must interpret (read aloud) an excerpt from a text for six minutes. The theme this year was serious, so texts were darker in content.

As for Original Oratory, team members create a six-minute speech, similar to a small essay, on a given theme.

Representation from our community

The Speech & Debate team believes that it’s not as popular as it should be. In fact, Ingrid says, “Every year they announce CEESA winners for sports, but they never announce the winners for Speech & Debate, which is kind of sad, because it is a lot of work and it’s very demanding.”

To the left, Cristina and further right, Noga

Cristina, an 11th grader who’s been in Speech & Debate since 9th grade, tells us that “there is a lot of creative, emotional expressions involved in Speech & Debate. It has also taught me to believe in myself, and you gain a lot more confidence.”

“I’ve seen the younger 9th graders, who were very shy at first, but they got closer to other high-schoolers during the season and they built their confidence to speak up and to express themselves, which I think is beautiful,” she adds.

“Right now, my goal is to start as early as possible. Starting with upper elementary students, we’ve been having a Speech & Debate Club as well (…) We are trying to get as many people as possible involved in this activity because it’s very rewarding.”

Overall, the team strives to gain more notability from our community this season. “Speech & Debate hasn’t gotten a lot of presentation or attention from the AISB community. I’d really love to see more representation, whether that’s like in assemblies or people promoting it,” Ingrid points out.

A strong start for middle schoolers

To first year competitors Maria and Nicole, the Speech & Debate CEESA competition was something entirely new. “Being 6th graders was hard because we competed a lot against 7th and 8th graders, but we competed until the semi-finals which is really good,” says Nicole.

When asked about her thoughts on Speech and Debate, Maria adds: “I think it helped us in other subjects because now we are stronger writers and we’ve learned the structure.” Nicole adds that, “Even if you find it too hard at first and you don’t like it, you need to remember that it will get better. You need to try your hardest because it will help a lot!”

Busy Debate Session for the MS

10th-grade student-coach, Ingrid, traveled with Nicole and Maria to Warsaw, and witnessed their success: “Just seeing the progress that every single kid there made, especially because so many were 6th graders, was mind-blowing.”

Additionally, Ingrid was very proud to see the students finally compete in CEESA. “I’ve been coaching them for the season, and I think it’s such a surreal experience to actually see them perform in a competitive environment.”

The team’s feelings about the high school season

With all the freedom to engage in their interests, Ingrid encourages reluctant students to face the audience and not be shy when it comes to their opinion: “We’re all really united in Speech & Debate– oftentimes we help each other out, we give each other feedback. Don’t be afraid, it’s nothing intimidating!”

Additionally, students work in pairs, which improves their communication and collaboration skills. “You do a lot of research and you try to revise with Ms. Cristina and your partner,” explains Matei V, an 11th grader who’s been debating since last year.

How S&D can shape your mind…

High School Member Ioana D, from 11th grade, shares her thoughts on how Speech and Debate has shaped her into the person that she is today:

“For this year’s CEESA Speech and Debate, I participated in Debate and Duet acting with Mara. I feel like debate has shaped me into who I am now; I can think critically and construct an argument, test or cross-examine a piece of information and support my stance on any topic. It didn’t take me too long to fall in love with Debate last year when I first tried it in CEESA and to continue it ever since.”

The HS Team after wrapping up with CEESA, in Prague

About her personal experience at CEESA, Mara T from 11th grade says that they “underwent many challenges and tests as a team, but I believe that we grew and learned from this experience. If there is one thing I cherish from this experience, it’s the fact that it brought us closer together as a team, and taught us the importance of winning and losing with grace and dignity”

The HS Speech & Debate team meets Tuesdays and Thursdays from 3:30 PM to 5 PM after school in the library.

Details on Next Week’s Spirit Week