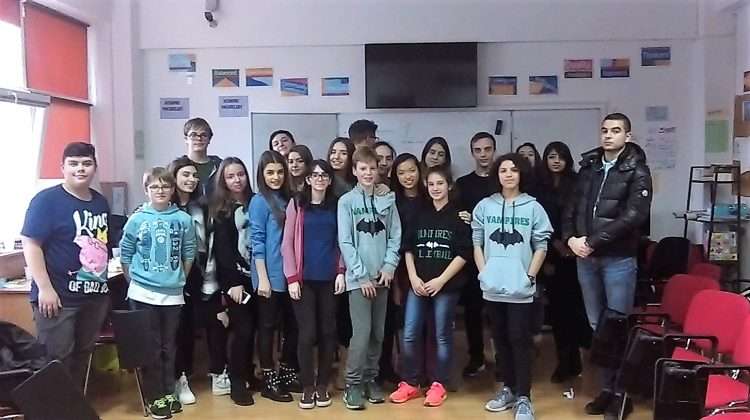 On the 22nd of November, a group of AISB students traveled to Călărași to visit Barbu Ştirbei High School and spend a day full of leadership-centered activities.

The main goal of this summit was for the Barbu Ştirbei students to teach AISB students about the skills and qualities a good leader should have.

When they got to the school, they were led to a classroom where there were students and pizzas waiting for them. The first item of the list of activities that day was to eat lunch and socialize.

After lunch, the tables were arranged in a big circle so that everybody could see each other. After everybody went around the circle introducing themselves, the activities began.

The entire event was organized by the Barbu Ştirbei students, so these activities were thought of by the students.

The first activity involved sticky notes. Everybody received 10 sticky notes each and had to write down something that was important to them on each one. They then had to throw away the sticky notes one by one, so that they were left with the sticky note they valued the most. The student who was in charge of this activity explained how this helps people visualize what their priorities in life really are.

Another activity was more of a challenge. The room was split into groups, with the two schools mixed. Each group was given an egg, balloons, paper, straws, and tape, and was told that they had to make sure that the egg survived being dropped from a balcony. This activity brought the students from the two schools together, and encouraged teamwork and participation.

After that, students were paired up, and one person had to challenge the other person to do something. It could be anything they wish. One person was challenged to sing in front of everybody in the room, another was challenged to draw a dog wearing a hat. After everybody got challenged by their partners, they were then told that they had to complete the challenge themselves. This was meant to show the group that they should always think about what they do to someone. This is basically the saying ‘treat others the way you want to be treated’ put into practice.

All of these activities were meant to show the AISB students how a student leader should think and act.

These student leadership training sessions started last year. It was only available to members of the student council, and missing just one session would mean losing the opportunity to come to the sessions again.

According to Maria Avram, a grade 10 student who is training to be a student leader, there are two parts to these sessions. “The first part was mostly theoretical,” she says. “We learned about the difference between being a leader and a manager, for example. It was also about the qualities that you need to have to be a leader, so it was a little bit of self-discovery and self-development as well. A lot of it was just learning about how to take initiative, and finding opportunities to say what you want to say and improve the product that you’re working on.”

There is a small group of 8 people being trained, ranging from 7th grade to 9th grade. They have become a close group, and know each other well. On their trip to Călărași, they spent their bus ride laughing and talking with each other. They also worked on their leadership projects.

According to Maya Taylor, a grade 9 student who is also in training, these projects are about “Something you want to see changed in the school. Sometimes students aren’t engaged or interested here. We don’t have a lot of details yet, but we’re going to do something with that.”

Kate Sorrell, the supervisor for this group, suggested that the students do something with internationalism in the school. She said that there are so many nationalities at our school, and she wants the students to do something to celebrate that.

Maria Avram talked about her group’s idea for their project. “We’re going to create lunchtime leagues,” She said. “The middle school students and 9th graders will form teams and play during lunch, and we’ll have the 10th, 11th, and 12th graders supervise them for service hours.” They are planning to do a variety of sports, starting with basketball and volleyball. “To include the multicultural idea, we’re going to make sure that there are at least three different nationalities in each team,” Maria continued.

The school is looking forward to seeing these projects put into action and plans to continue offering leadership opportunities for AISB students.