A Students’ Quick Guide to the US Presidential Election Race 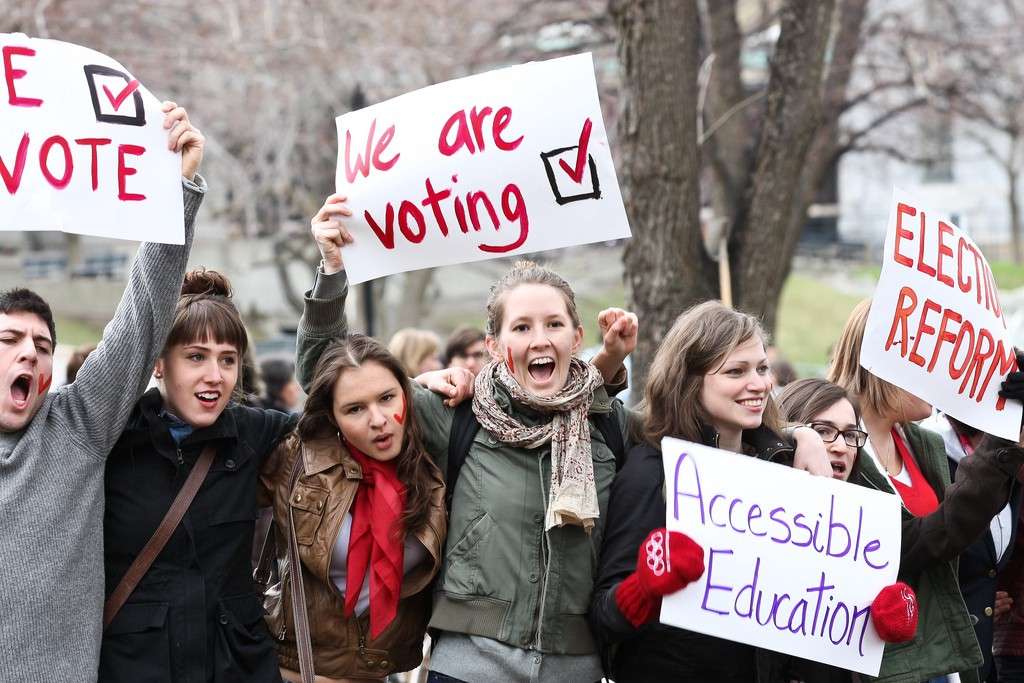 Photograph by Adam Scotti, distributed by a CC-BY-NC-SA 2.0 license.

Even though the United States presidential election isn’t until November, the primaries are in full-swing, and the media is heating up with updates on the candidates, democratic debates, and caucuses.

Although the election process is extremely complicated, we’ll try our best to give a basic rundown of the process, as well as a look at the presidential candidates.

A breakdown of the election process

It may seem like the American elections go on forever (and they do go on for a really, really long time). Here’s an over-simplification of what happens:

First, there are the primaries, which are happening now. Basically, party members (Democratic or Republican) vote on who, out of the current 10+ Democrats and three Republicans, will represent them in the general election. During this time, and much throughout all of stages of the election, each candidate will tour the US, giving speeches and having debates with other candidates to gain popularity, attention, and to share their ideas with the people.

This lasts from February to the end of summer, when the national conventions take place. The 2020 Democratic national convention will be held on July 13th-16th in Milwaukee, Wisconsin, while Republicans will gather in Charlotte, North Carolina, on August 24th-27th. This is when the candidates are officially announced.

Many debates, speeches, conventions, and news stories later, election day arrives. The election is planned to take place on November 3rd of 2020. This is undoubtedly the most important part of the whole election process. People all over the country go to their local polls, where they cast their ballots, containing their vote. For expats, you must request your ballot to be sent in the mail and be registered under a state. (See link for more detail on how ballots work.)

Finally, the new president is sworn into office on inauguration day, which always takes place on January 20th. The event is televised, complete with an oath-taking ceremony and parades.

Who’s in the running? A look at the Democratic and Republican candidates

This election is especially complicated, as the race started out with 18 Democratic candidates–the most ever in history.

With there being so many democratic candidates, we’ve decided to focus on the top three to look out for. The top three candidates might change over time, but so far, these three have shown the most promise and have been the most popular.

The first and arguably most popular democratic candidate at the moment is Joe Biden. You might recognize this name, as Joe Biden was Obama’s Vice President for eight years. According to a Rolling Stone article, Joe Biden is “bringing back sanity to the presidency.”

“Our best days. Still, lie ahead.”

One of Biden’s goals is to strengthen economic protections for low-income workers. On his official campaign website, he says his vision is to “rebuild the backbone of our country (the shrinking middle class), to make sure that our democracy includes everyone, and finally to demonstrate respected leadership on a world stage.”

Warren has been the senator for Massachusetts since 2013 and is currently the third most popular democratic candidate.

Warren has many ideas focusing on solving tax and wealth problems in America. Some ideas that she has poured a lot of attention into are: focusing on inequality with a “wealth tax,” preventing the rich from getting richer and the poor from getting poorer. Warren also wants to create free or low-cost childcare and make childcare universal. According to the New York Times, Warren sees a shrinking middle class, due to the number of attacks from big corporations, as well as political corruption.

“Together, we will dream big, and fight hard.”

“Progressive purity” is what Rolling Stone thinks will appeal to voters. And Warrens’ campaign revolves around changing America for the better, helping the middle class, and creating a stable and fair economy, with stable and fair taxes.

Bernie has already run for president before, and for a while, it seemed like he was a candidate for the win. Bernie Sanders has been the Junior US Senator from Vermont since 2007. The 78-year-old is the longest-serving independent in U.S. congressional history.

Sanders is tackling a lot of the same issues as before, such as tuition-free college to reduce the huge amount of debt Americans are faced with, medicare for all, and income inequality, as well as curtailing the influence of billionaires in America. One of Sanders’ main focuses is giving more power to the people.

Sanders is focusing on bringing people together by creating a community, helping others, and having everyone’s voices be heard. Many refer to these as “socialist” ideals.

Only three people are running against Trump, and they’re not really in the running. In fact, Trump has referred to the men as “The Three Stooges.”

Trump has held a pretty steady approval rating throughout his term, hovering around 40%. His agenda and ideals are divisive, and Democrats have condemned him for focusing on the “undoing” of the policies enforced by the Obama Administration. Some of Trump’s most controversial projects have been the construction of a wall to separate the US and Mexico, renegotiating international trade agreements and pulling out of the Paris climate agreement.

Trump’s main accomplishment over the last four years has been a sweeping tax cut, but according to the New York Times, this cut has only benefited corporations and wealthy investors.

If you want more clear and detailed look at how Trump plans to Keep America Great,” visit his website at https://www.donaldjtrump.com.

While writing this article, we sent out a survey to address some questions students had about this very confusing election process:

Q: Why are there 18 Democrats running against 3 Republicans?

A: Well, there are a lot of people with a lot of ideas on how to change or “fix” things that Trump has put in place during his time in office, as well as pass more bills that they believe will help the entirety of American citizens. Most experts agree that it would be very difficult for another Republican candidate to beat Trump for the nomination, so not many tried.

Q: Does Trump have a chance of winning a second term?

A: At this point, it looks like Trump will be the Republican candidate. Whether he wins will largely depend on who gets the Democratic nomination. The Guardian recently reported that with a growing approval rating (49% at the time of publication), he has a good chance. This means that Democrats will need to be strategic with their nomination.

Q: What are absentee ballots?

A: In simple terms, absentee ballots are when you submit your vote through the mail or email before the election rather than going to the polls and voting on election day. Many people who live overseas choose to vote with absentee ballots, as they don’t have access to voting areas on election day. This can be done through county supervisor of elections offices or through organizations like Democrats Abroad or Republicans Overseas.

Q: Will it be covered and discussed more at school? I think it is a very important event, even for non-Americans such as myself because of the impact America has on the rest of the world.

A: We hope so! We agree that it does affect our community, although in different ways for each person. It would be nice to just have a better understanding in general of global events like this so people can talk about the topic with actual understanding.

Q: How can young people (below the voting age) get involved and take action in this process?

A: Since the voting age is 18, the best thing young people can do is to start learning about how elections work and try their best to follow what’s happening, even though it can be a very long and confusing process. Many of us will be able to vote in the next election, after all!

If you have any unanswered questions, feel free to look at the hyperlinks throughout the article to get a more detailed explanation of each candidate and the different processes of the election.