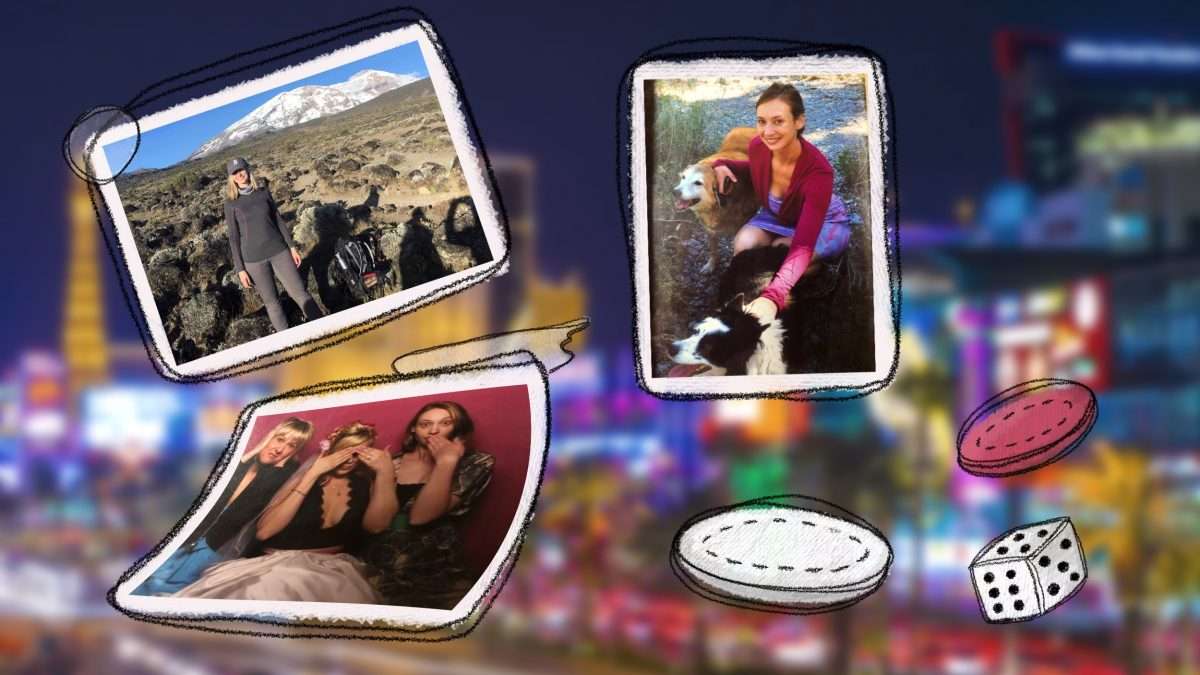 The AISB community knows Ms. Aliza Robinson for her bubbly personality and love of Shakespeare, but there’s much more to learn about her. From growing up in Las Vegas, eventually working as a blackjack dealer at her father’s casino, to moving all around the world, Robinson shares her story.

Growing up in Las Vegas

Robinson was born in Las Vegas, Nevada, but grew up in a nearby suburb. She recalls an “interesting” childhood—one where birthday parties, Thanksgiving dinners, and sleepovers were all held at local casinos.

Her father was a casino manager, starting his career in the late 1960s, when he moved to Vegas to become a craps dealer (someone appointed to a gambling table to help conduct a game, usually in the distribution of bets and payouts). Throughout the years, he worked his way up through the casino business, landing himself a role as an executive at a casino, where he ensured everything from slot machines to entertainment was running smoothly.

With her father in the casino business, Robinson says that connections were everything. “[Vegas] seemed much more of a town than a city,” she says. “Because so many people were in the casino industry, it felt like we knew everyone.” She explains that wherever she went, she somehow always came in contact with someone who had worked with her father. “People that lived in Las Vegas at that time had been there for a while and kind of had history there, like my dad.”

Being the daughter of a dad who worked in the casino business had its ups and downs. As explained by Robinson, her father was always moving. And as the casino industry grew, and more casinos were being opened all around the country, her father ended up getting jobs in other places where he would have to move away for years at a time—landing jobs in Colorado, Louisiana, Illinois, and in the Bahamas. “He was all over the place,” says Robinson. Meantime, she stayed at her home in Las Vegas, with her mom and sister, looking forward to school holidays, when they could see dad.

“My dad’s my person,” Robinson says. “I understood why he had to leave every 1-2 years for work, “but it didn’t make it any easier.”

This constant moving put a strain on her parents’ relationship, but actually made Robinson more connected to her father. She explains that it made her treasure the moments with him far more than she did before. She also credits the summers spent in different states for instilling her love of travel.

In high school, Robinson was the editor of her school paper. And by senior year, she was convinced that she wanted to become a writer.

She decided to stay close to home during college and attended the University of Nevada, Las Vegas, where she studied journalism. The writing came easily, but she struggled with developing the confidence needed to conduct interviews, and decided that it wasn’t the right fit for a career.

This led Robinson to get her Master’s degree in English at a university in the UK. “I had applied to schools in both the US and the UK, and when I looked at my options, King’s was the one that was most appealing for a lot of reasons,” most of which was living in exciting London.

When she finished graduate school, Robinson was looking forward to a year of figuring out her next move, when her father convinced her to come back to Las Vegas. She would work as a VIP services representative, and later as a Blackjack dealer at her father’s casino, the Tropicana.

“I started dealing blackjack because it’s the easiest to start with, but I ended up switching to roulette because I found [blackjack] boring; it’s very much a repetitive motion… the time passes really slowly.”

With placing bets, stacking chips, and counting, roulette was much more stimulating—important when working eight hour shifts. But it was also draining, as the majority of casino work is socializing with guests, and making them feel “welcome and giving them a good time.”

Teaching and Moving Away from Home

Once again, Robinson left Las Vegas—this time to pursue teaching in Boston, Massachusetts. It’s here that she continued her education and got her first teaching job at a public high school.

But while Robinson felt she was on the right path, and felt a passion for teaching, she recalls her first experience with sadness.

“Teaching students with children of their own, students in group homes, and students who were not cared for…It was really hard. Seeing that the school didn’t care about what happened to them. Their attitude was very much, ‘It is what it is.'”

Robinson decided she couldn’t stay there any longer, and soon heard about international teaching from a mutual friend who had worked in Shanghai, Kuala Lumpur, and Switzerland. This sparked her interest, and with his help, she was able to land herself a spot in a job fair, where she hoped to find a position at one of the international schools.

After three attempts with schools based in South America, Robinson was offered a job teaching English in Buenos Aires, Argentina. She remembers the principal saying, “Even though you didn’t have as much experience as the usual candidate, you are the right fit for this school.” This meant a lot to her, as she was fairly new to teaching; and the faith the principal had in her pushed her to where she is today.

She taught there for four years, in which time she fell in love with international teaching—and she’s been doing it ever since.

This is Robinson’s sixth year at AISB; and now with her new title of DP Coordinator, she plans to stay a while longer.

She says Bucharest feels like home, and reminds herself that she’s dreamt of living in Europe since she was a kid. “I always hoped I’d return after my time in London,” she explains.

When reflecting on her childhood, Robinson talks more about the experience of being away from her father and how that creates connections between herself and her current students. When working in international schools all over the world, she’s noticed a pattern of one parent usually having to leave for work in different countries while the other stayed home with the children for stability. “I see myself in those students,” she says.

As for Robinson’s family, her sister moved from Las Vegas to New York, where she’s raised her own family. And her mother and father followed to be closer to their grandchildren. While New York isn’t necessarily “home,” Robinson likes the fact that her entire family is all in one place—just one or two flights away.

As for what’s next after AISB, Robinson says, “If I had one dream, and all the money in the world, I would open up a little bookstore with a cafe, where I could bake a cake every day in a little mountain where I could hike and have a golden retriever.”