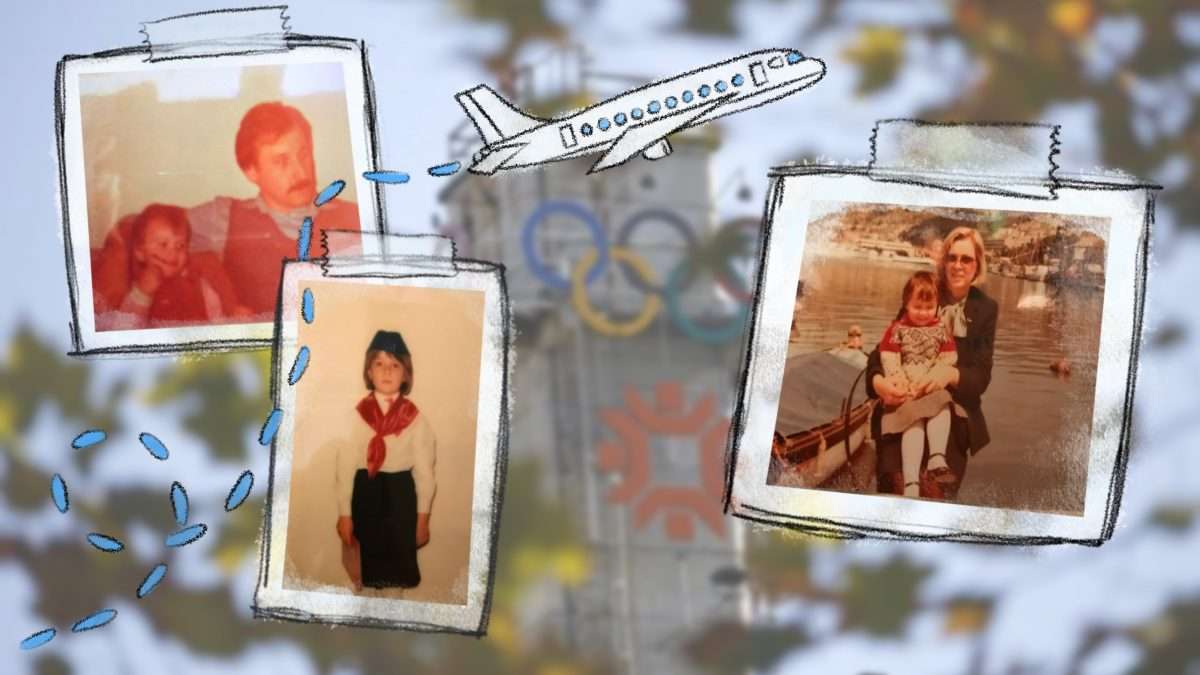 As she lived around the world as a “third culture kid,” AISB Design Teacher Alma Hadzic saw her country fall apart on the news: a result of a three-year long devastating war.

She questioned her identity, all from a distance. Her experiences from abroad, and her return to her homeland shaped who she is, and her life path, which would eventually lead her to AISB.

Alma Hadzic was born to Bosnian parents in former Yugoslavia in 1981. While she comments that she really doesn’t remember much, she does recall the 1984 Sarajevo Olympics.

It was the first time the Winter Olympic Games were held in a socialist state; and because of this, Sarajevo (now the capital of Bosnia and Herzegovina) went through a dramatic transformation to become a host city its people would be proud of.

“As a communist country, we didn’t have Western products. The Olympics brought the whole world to Sarajevo. Now you could get Coca-Cola or Pepsi, so that was kind of exciting.”

During this time, modern day Macedonia, Serbia, Montenegro, Slovenia, Croatia, and Bosnia and Herzegovina were all considered Yugoslavia, “a big and beautiful country,” according to Hadzic. Some of her fondest memories were spent driving through the expanse, to her grandparents’ house in Dubrovnik (now in Croatia).

She also recalls her year in the Yugoslavian school system, where she was part of “Tito’s Pioneers,” a subset of the Socialist Youth Union of Yugoslavia. The movement was an effort to instill the ideologies of the former president of Yugoslavia, Josip Broz Tito, in children above the age of seven.

“The values weren’t inherently bad,” says Hadzic. “We were taught about equality, brotherhood, community, serving for the greater good… but I now know that school is a social engineering experiment—you learn what they want you to believe.”

Hadzic was the last generation of Tito’s Pioneers. She explains that since Tito died a year before she was born, she was able to witness the breakdown of communist ideas and slow rise of nationalism, which eventually led to the fall of Yugoslavia.

“I was essentially born in a country that doesn’t exist anymore,” says Hadzic.

Due to her father’s job, Hadzic left Sarajevo before the breakup of Yugoslavia and the Bosnian War. Their first post was in Cameroon.

“I was able to see all of these different animals that I could previously only see on TV,” remembers Hadzic. “Seeing a monkey in my garden or these lizards that terrified me are some of my earliest memories.”

Being able to live in a country that was so different from her own made her question what “home” actually meant.

“I had to learn that countries and nationalism are human constructs,” she says.

After a short return to Sarajevo, the family moved to Cairo, Egypt for two years. There, Hadzic was exposed to three new languages, as she attended a multilingual school in English, French, and Arabic. With Bosnian as her mother tongue, Hadzic developed a fondness for math, since she didn’t have to translate; numbers were the same. She also became “obsessed” with Ancient Egypt, and visited the Archeological Museum of Cairo and pyramids on a regular basis. “It was a magical time for me,” she says.

Besides the excitement of living in Egypt, at the age of nine, Hadzic discovered a new hobby when her mother enrolled her in a ballet classes. “Ballet taught me discipline and to persevere. It is really not easy, there were a lot of tears wearing the on-point shoes which made my feet bleed. But I stuck to it. I’d say it definitely shaped my character.”

In 1992, she relocated to Bangkok, Thailand with her family, and attended the NIST school, which was based on UN ideologies: maintaining peace and developing friendly relations between countries. Meantime, the Bosnian war was tearing apart her country, contradicting these ideologies—and always in the back of her mind.

Hadzic and her family watched the war unfold on television. “I’ll never forget that feeling,” she says. “I was telling my dad, what does this mean? What’s my identity?”

Being a third culture kid had a profound impact on Hadzic’s identity, which she describes as “patchwork.” Yugoslavia was her home, then it stopped existing as a country. For awhile, she was “stateless,” and wasn’t sure where to go.

As a result, after graduating from a boarding school in Germany in 1997, Hadzic took a gap year, and went to Bosnia, to answer the questions: Who am I? Who are these people that I’m part of?

At first, she says that she felt like a foreigner, and went through “reverse culture shock.” Slowly, she learned what people had to go through during the war, through service projects where she could use her language skills and try to make connections.

She originally planned to go to the U.S. after the gap year, but Hadzic ended up staying in Sarajevo for another 13 years, where she would reconnect with relatives, have work experiences, and start a family of her own.

“There’s a saying in my country: when humans make plans, God laughs. Just goes to show that we make plans but things can turn out not necessarily the way we expected.”

Hadzic comes from a family of engineers, and attributes this to her love of “making and creating things.”

At first, her mother wanted her to study architecture, which she would initially do, but then decided that a Product Design course was much more appealing. She expresses that the fusion of both the creative and mathematical side is what makes design interesting.

For some time, Hadzic worked as a freelance product designer, then moved into teaching—inspired by her mother, who taught math for a few years overseas. After meeting the director of the first IB school in Bosnia, she was offered a position as an Arts and Design teacher.

After Bosnia, Hadzic taught in Germany and Singapore. Then, through certain connections, she heard about AISB and its Design Center Project, and really wanted to be a part of it.

Unfortunately, certain events, combined with the pandemic, have led to the project being put on hold. “Honestly, the first feeling was disappointment,” she admits. “I put in a lot of effort for the project in my first year. But it helped me reframe my thinking, and I realized that I’m here for the mindset, not the building.”

This mindset will likely keep Hadzic in Romania for the foreseeable future, with her husband and two children: both AISB students following in their mother’s footsteps.