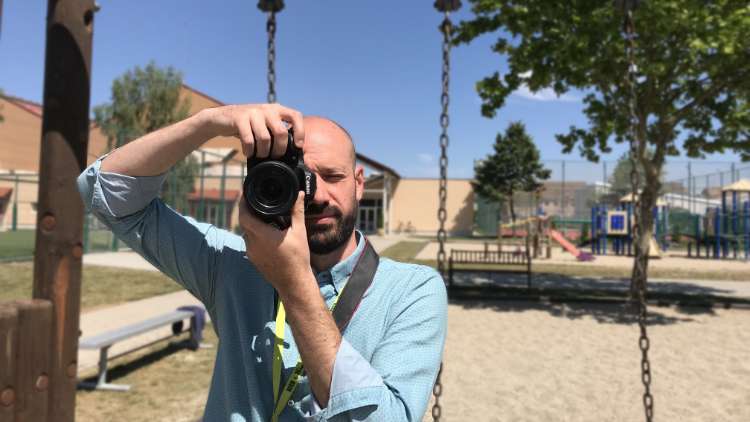 AISB students have gotten more interested in the creation of movies over the last few years, and a large part of this interest is due to the work of creative DP and MYP Film Teacher Bryan Parnell. We sat down with him to learn about his story and film career, and talked to students who shared their most memorable moments in his class.

Just a young man in a small town in Canada, Parnell first started out as an English teacher. Although he liked the subject, he had always felt that movie making and film was where his heart was. After gaining practice by teaching film after school and organizing film-related events (such as film festivals), Parnell left his school and started teaching here at American International School of Bucharest, where he says he is currently at his “dream job.”

Parnell believes that there is great momentum behind film-making at our school, which is why AISB students are so motivated to express themselves and their creative ideas through film, and also why their movies find success at local festivals, such as the European Student Film Festival (ESFF).

When Parnell’s students win awards for their films, he explains that he’s “obviously very proud of them, but the festivals are great because it’s not all based on the awards.”

One of the reasons that students are so motivated to go to these festivals is the 24-hour film challenge, which the students start shortly after they arrive. They form groups of 4-5, each student being from a different school, and they have 24 hours to create a short film together.

When making the films, students are so “immersed in the experience that they stay up throughout the night, working on the film, filming in the dark, and waking up early to continue editing the film to get it ready.”

A student who participated in the ESFF says that it was, “One of the best experiences of my life, [and] the opportunity to learn about film from a variety of professionals is a rare one that I will cherish forever.”

Parnell agrees, and says, “The number of things students are able to learn in a short amount of time is incredible.” Not only is it a wonderful experience to work with other students, keep in touch with them, and see them the next year, but there are so many resources such as other professionals ready to assist you and new equipment that students can experiment with. (The next ESFF will take place in the fall of 2018, and you can find out more about it here.)

Parnell went on to state that he tries helping the students as much as he can for them to improve. He does this not only by using his five years of experience teaching the program, but also by making more improvements to the course and introducing more challenging topics to younger students without overwhelming them.

“There’s a steady stream of constant improvement,” says Parnell. “Every year the quality of the films is bumping up due to the equipment we are using; and also I think that the newer generations of students are just more exposed to better software and equipment and are becoming faster at learning these new techniques and incorporating them into their film.”

There are many students who feel that they have improved due to Parnell’s teaching methods, and Matei V. is one of them. He is taking the film course for the second semester in a row and says that Parnell is a “great and unique” teacher. Matei views the film classes as a positive, fun, and educational environment where students can be “as open and free as they [want to be].”

Matei went on to tell a short story about Parnell’s teaching and immeasurable kindness. When he was in the first quarter learning about film, Parnell took him under his wing after discovering their shared passion for the subject. Parnell then proceeded to teach Matei advanced techniques and gave him more difficult materials to help him improve.

“He stayed with us after school and showed us how to set up the tracks [in order] to set the camera on,” Matei remembers. “Once we were done, he gave us extra materials like batteries and tracks in order to avoid any issues. When one part of the material was lost by students who previously used the machines, he thought of an alternative method for us so we can use the tools and incorporate it in our movie. He trusted us with important equipment, and believed in our love for the subject.”

Nick B., another 9th grade student in the same class as Matei V., also expressed his opinion about Parnell, giving an example in which Parnell acquired a gimbal (high-level equipment that is difficult to use; typically for film production level movies), learned how to set it up, then passed on his knowledge on to the students. “He was patient, and never got mad if we didn’t know how to use it or set it up,” says Nick.

Parnell believes that film is a gateway for creativity, and is a unique and dynamic way to tell a story. He feels that the visual text in films speaks to our generation and that it is the contemporary platform for storytelling. He also thinks that filmmaking provides great experiences as it opens students’ views of the world and helps them in many different ways such as problem-solving on the spot, working in teams, and doing any kind of media work (i.e. presentation or filming).

Thank you, Mr. Parnell. We are grateful for your passion, compassion, trust, freedom, motivation, and love for film!