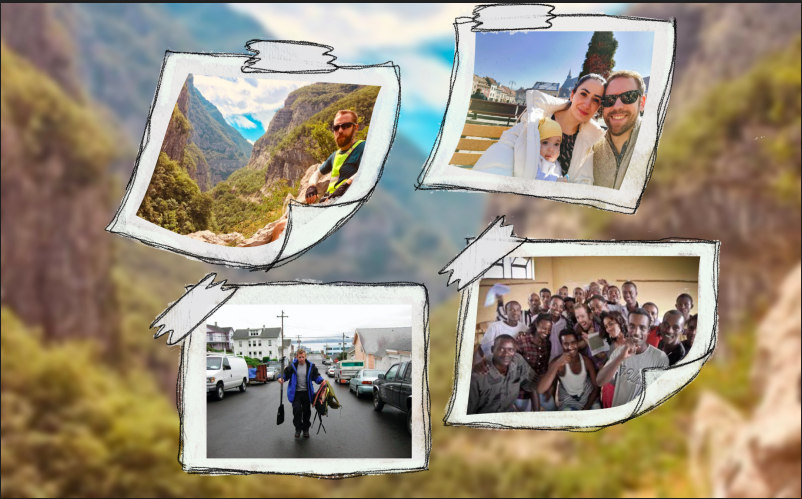 This author does not have any more posts.

Thirty-six-year-old Charles Adams, known as “Mr. Chuck” to students, has gotten to travel the world and experience different traditions and cultures. Now, Adams shares some of these experiences that have shaped him as a teacher and led him to AISB.

Growing Up in Oregon

Adams was born in the port city of Astoria, Oregon, to a carpenter and a homemaker. He was one of five children, and remembers money being tight. “Growing up, my family was not rich,” he says. Traveling was never a possibility, and wasn’t on anyone’s minds—that is, except for Chuck’s.

As soon as he finished school, Adams moved to Eugene, Oregon, where he attended college and began working as an environmental news writer/critic of the arts. He spent his days reviewing musical acts and writing environmental features for the Eugene Weekly paper. The job exposed him to a life of artists and deadlines, and was exhilarating.

“It was just like the dream job,” says Adams. “I couldn’t have possibly asked for a better job after graduating college.”

Adams developed a passion for writing, but soon felt trapped at his desk, and dreamed of getting out into the world. He thought back to his seventh-grade science teacher, and the stories she told about her time in the Peace Corps, stationed at a school in a tiny African nation called Lesotho. “It just stuck with me,” he says reminiscently.

A Summer in Mongolia

The first step in Adams’ journey abroad was spending a summer teaching English in Mongolia. He didn’t have much travel experience and knew the Peace Corps would be looking for it on his application. He also wanted to prove to himself that he could survive in an unfamiliar environment. The organization that helped him do this was the International Cooperative Education volunteering service.

“You go to Italy, you have all these movies in your mind about what Italian life is like; the cappuccinos and the narrow streets, the language. I had no idea what I was getting into with Mongolia. I just wanted to take that leap into the unknown.”

In Mongolia, Adams was able to stay with a host family that brought him along on events like the Naadam Festival in the lively countryside. There, he was able to learn about traditional wrestling, horse racing, and archery, and sample local foods like “this big stack of dry cheese” (shown below) sweet mare’s (female horse) milk, and fresh goat (which his host family slaughtered in front of him).

“They got it on its back and cut a tiny hole in its chest and they reached in really quickly and pinched a main artery,” Adams remembers. “The animal was dead in a few seconds… it was something I think every meat eater should go through.”

It’s experiences like this that is why Adams chose to live in Mongolia. From his time spent in the country, he learned to survive in an unfamiliar environment and to push his boundaries.

The Peace Corps in Ethiopia

Around 2010, Adams worked as an “English language teacher trainer” in Bonga, Ethiopia. He was living his dream of working for the Peace Corps, and was fulfilled guiding English teachers to develop their skills in educating.

Though he was working under the department of education, Adams quickly found many other opportunities to further the Peace Corp’s mission: to help with social and economic development.

Adams began working with a non-government organization to give health-related training lessons to the area of Ethiopia he was stationed. He collected data through surveys in the community and made sure the team of doctors had everything they needed for their training. In the training sessions, the doctors taught dozens of midwives and other practitioners how to deliver a baby with complications (like a shoulder stuck in the birthing canal), but without any instruments or special equipment.

“I do think that training will have saved at least one life, if not dozens, with just that one little technique,” Adams says.

Adams has been teaching English and humanities at AISB for four years now, while coaching the school’s MS Cross Country team—fueling his passion for exercise. This passion also surfaced when Adams and David Bolster, a second grade teacher, went on a biking trip together.

In the summer of 2018, the two packed their bags and bikes with tents, sleeping bags, and lots of water. They biked from Romania to Serbia, Montenegro, Albania, ending up in Greece. It was the trip of a lifetime, but with a few issues along the way— including a strange disappearance then reappearance of Bolster’s wallet.

“We were on this beach in Albania and [Bolster] got a phone call and actually someone had found his wallet,” Adams recalls. The wallet was later shipped to Canada, where it stayed until Bolster could return home.

Adams still can’t believe Bolster got so lucky. He also can’t believe how lucky he’s been since arriving in Bucharest—primarily when it comes to love.

A couple years ago, Adams met a woman named Ani. She’d moved to Bucharest to work for a car company, leaving her Armenian family in Russia. Both expats, they bonded quickly, and got married last year.

But it wasn’t easy. The two planned a ceremony that was canceled by pandemic restrictions and sanctioned lockdowns. Travel was near impossible, and so were visas. But they were determined, and gathered all the necessary documents and headed to the courthouse. It wasn’t the ceremony they planned, but it was something.

“Right before we were about to be called in [to be wed], my wife got a message from her sister saying, ‘Go outside; we sent some flowers you need to meet the flower delivery person!’ And so she goes outside and actually, [Ani’s family] showed up. They came all the way from Russia just to be there for us.”

Another adorable surprise that took place shortly after the marriage, was the announcement of a baby. Their daughter, Mira, was born in late August of last year. And while Mira hasn’t gotten to see any of her family (other than mom and dad) in real life, the family has stayed happy with their newly added member.

With his wife being from Armenia, his daughter being born in Romania, and him being from the States, the international family doesn’t have plans to move back to any home country very soon. Adams states that while they eventually want to move on from Bucharest, the plan is to keep traveling.