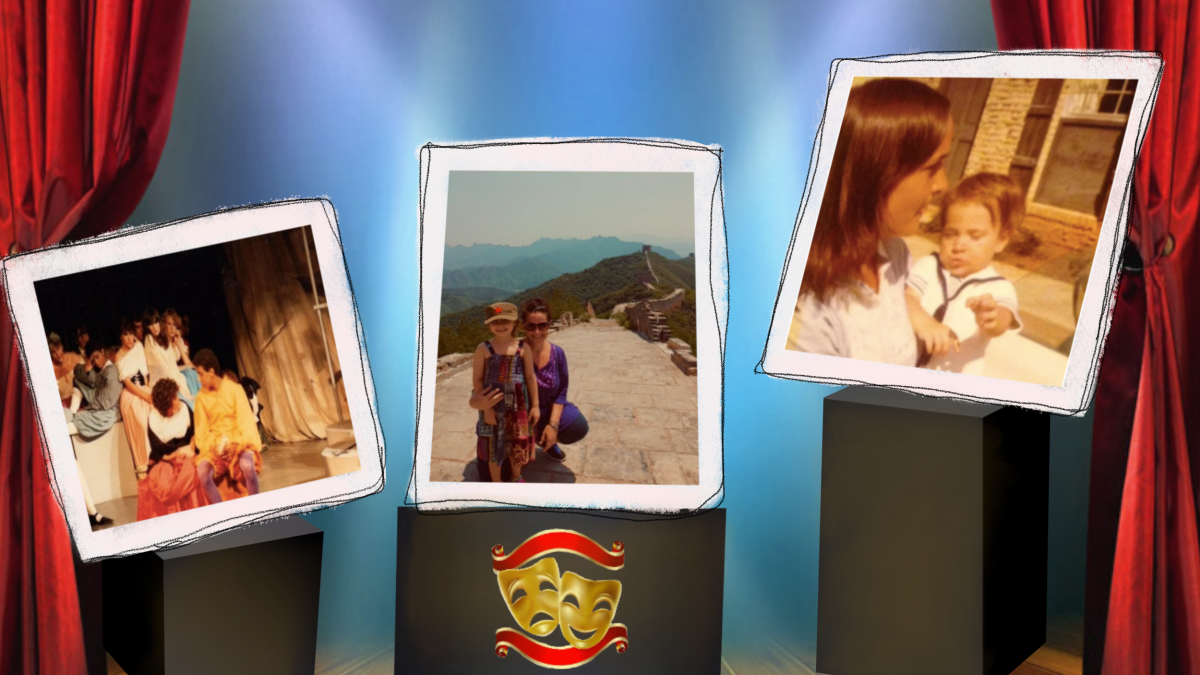 Most of us know Mrs. Jennifer Lawless as the jovial high school drama teacher—humorous and compassionate to all students who cross her path. But she’s also a person who grew up around the globe, found love in an improv acting class, and started a family. Here’s her story.

Growing up a Third Culture Kid

AISB Drama Teacher Jennifer Lawless’ life began when she was born in an elevator, in Ankara, Turkey.

Her mother was pregnant, two weeks past her due date. She had just returned to the hospital after being sent home for “false labor,” convinced her daughter was coming. After pleading with the doctors, they began to transport her on a gurney to the delivery room. And right as they wheeled her into the elevator, she started giving birth.

“My dad said that as the elevator doors closed, he started to hear me crying,” says Lawless. “It was just me, my mom, and the orderly in the elevator. Nobody helped her; I just came out, because I was ready.”

It turns out this type of adventure would follow Lawless for the rest of her life.

During childhood, Lawless moved all around the world with her mom and step-dad. Her mother liked to move around a lot, searching for fun and excitement. Because of this, the family lived in places like Turkey, Thailand, South Carolina, Maryland, The West Indies, Germany, and California.

“I didn’t know that it was anything unusual. I didn’t realize until 4th or 5th grade that people don’t usually move every year.”

Lawless says she doesn’t know if she considers herself a third culture kid (TCK), since she lived in the US for most of her childhood. “Even that label of TCK, I don’t really feel like is mine,” she explains. “Every person who fits into this category (TCK) has a different story. This is why it is hard for us to really feel grounded or rooted anywhere.”

Moving around so often as an adolescent was challenging for Lawless—always being the new kid, trying to figure out how she fit in. “It took me a lot of time to figure out who I was as a person,” she says, detailing that she even shifted her accent moving state to state. “I wasn’t really sure which voice was even my true voice.”

Throughout her childhood, Lawless attended a total of 11 schools in only 12 years. Trying to fit in was a challenge, especially as she grew older. “It was hard for me to develop deep friendships, since I didn’t know how to do that,” Lawless recalls. “I discovered the joys of libraries, and everywhere we moved I would find the school and town library right away.”

And while this lifestyle was difficult, Lawless admits that there were also some positive aspects. “I have great memories from a lot of different places. I had a lot of fun with my family; we had a lot of adventures.” She also adds that it made her the open-minded person she is today—always willing to learn and try new things.

Developing a Love for Theater

She never planned on going to Clemson, but South Carolina was the last place her family had moved, and she didn’t want to move again. Looking back, Lawless thinks that it would have been better to work for a few years before attending university.

“Because I moved around so much and I never really had roots, it took me a long time in college to figure out what I wanted to do.”

When she did find her passion (theater), school became meaningful. “I just loved it,” she says. “I loved my class, I loved the people in my class, I loved the feeling it gave me. It was like I finally found a place where I felt like I could be myself. I felt welcomed and included. I didn’t have to pretend to be anybody just to fit in. People accepted me.”

Lawless went on to get her undergraduate degrees in English and Theater, then moved to Chicago to become an actress. But after getting some experience in the field, she decided a career in professional theater was too competitive, and not the type of community feel she got in her college theater classes.

“In order to be a professional actor, you have to be really comfortable with being rejected, and I was never going to be that. I don’t like auditioning; it is very stressful. It was never really a good choice for me.”

Lawless didn’t know what to do for a while, and felt lost. Until one day, while walking down the street, she saw a sign that advertised an open house for graduate school. She walked in and headed towards one of the available tables: Masters of Teaching. And within three weeks, she was enrolled in graduate school to become a teacher.

Around that same time, another sign made its way to her, in the form of a flyer. It was for an improvisation show. “I had a great time [that night] and started going there a lot. I found something that I really loved,” says Lawless.

She began taking improvisation classes, where she finally found her place—and where she met her current best friend and husband, Marty Lawless.

The two improv performers were friends for six months before they went on their first official date. “We always had a lot of fun together on stage,” recalls Lawless. “[Marty’s] a really gifted comedian and that makes it easy to perform with him.”

The pair dated for three years before getting married in 2005. During that time, they continued performing together and eventually started their own improvisation company called Chicago Improv Anarchy, which they owned for 10 years.

Life was busy, but fulfilling. Lawless finished graduate school, and began teaching and performing at the same time—sometimes performing improv at 11 o’clock at night, then getting up at 6 the next morning.

Lawless was loving her new teaching career and felt like she was making a difference. And in 2010, she began making a difference in an even more meaningful way: by becoming a mother. She and Marty named their new daughter Zoey, and their family of two became three.

As Zoey got older, Lawless wanted to provide her with the best education she could—and knew this wasn’t in Chicago. “The school system there is very challenging,” she explains. “There were a lot of things happening at the time that made me really unhappy. I didn’t want Zoey to go to our neighborhood school; there was a lot of violence in Chicago and it didn’t feel right.”

The Lawlesses decided international schools might be the answer, even though Marty worked for a pharmaceutical company, with a degree in computer science. Lawless thought if they moved overseas, she could teach drama, and Marty could get hired to do something IT related.

“We went to a job fair and interviewed for a school in Shanghai,” says Lawless. “They said they wanted [Marty] to teach since they had robotics, computer science, and photography classes.” It was a great opportunity, and so Marty got certified and became a teacher alongside Lawless.

It’s now been eight years, and three international schools. Zoey is now in 6th grade and has been able to see much of the world—just like her mom did at her age.

As for what the future holds, Lawless says wherever they move next largely depends on what’s best for her family. “Home, after all, is where my husband and daughter are.”