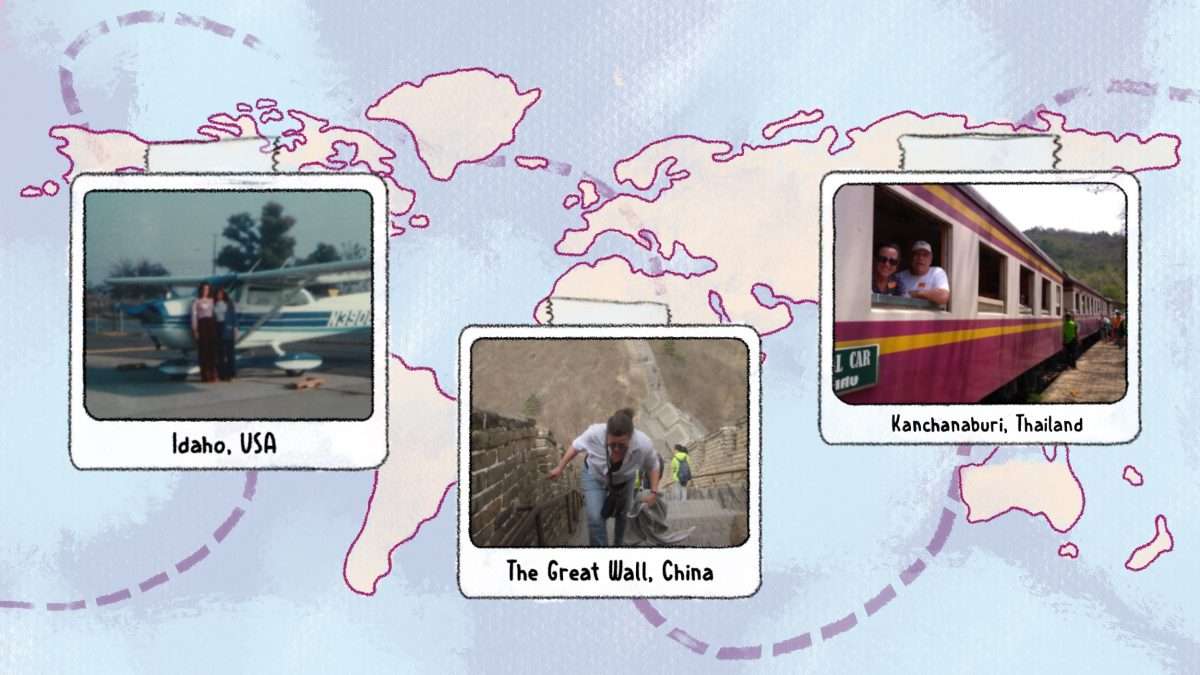 Laurie Clemens has been a 6th and 7th grade science teacher at AISB for three years. What most people don’t know is that her working career actually started in the air, as a small airline pilot for tourists. Now the tourist herself, she thrives on living abroad, and is currently preparing for a big move to Egypt. Here is her story.

Life as a Pilot

Clemens has always had a passion for science, and started college studying the subject. But she soon became bored, and wanted more of a challenge.

“I found that I had a lot of time on my hands since my classes weren’t very challenging so I thought, ‘Oh flying would be fun!’ So I started looking for an instructor near me and started classes after school.”

Flying planes quickly became a passion for Clemens and she found an instructor to give her lessons at a small airport near the school.

She was still putting a lot of work into her college courses, but would most look forward to her flying lessons—starting at the flying range and eventually being able to soar over the mountains, and even the Grand Canyon. Clemens would do this three to four times a week, building up her flying hours, and soon started taking jobs from anyone and everyone that would pay her to fly them where they needed to go.

The adrenaline rush of flying was addictive. “Sure, landing and taking off was scary and the hardest part, but when you’re in the sky it’s such a wonderful feeling.”

While Clemens loved the feeling of flying and had a lot of fun during this period, she did face a few expected challenges while piloting, such as the extremely male-dominated environment. “I never thought of it as a male or female job,” she says, “I just saw it as something I wanted to do.” She wanted to do things that others were scared of doing—taking risks and trying new things made her feel alive.

But after five years of flying, Clemens says working the same route with the small local airline company “started to feel like a taxi driver job.” She wanted more of a challenge—and teaching sounded like the perfect fit.

Clemens started her teaching journey at a small school in Idaho shortly after graduation. She moved there with her husband Ted, whom she’d met a few years prior, while taking scuba diving lessons. Ted was serving in the US Army, and this was his newest posting.

The transition wasn’t too difficult for Clemens, who says she thrives off of change. And teaching seemed like the perfect job to have while creating a family of her own. She soon developed a passion and felt like she was doing what she was meant to do.

“When it comes to teaching, there are differences you can make in lives through the way you interact with your students and the personality you give,” says Clemens. “We all remember the teachers we have by their personality and the way they taught.”

In the 18 years teaching in Idaho, Clemens taught every subject in grades 7-9 except English. She says that while she enjoyed the kids, her days became routine. “Every day I would pull out a different textbook for each of my six different classes,” she remembers. “I would try to switch it up by doing activities and change the routine… but it was still the same things each and every day.”

Moving abroad to teach has always been of interest to Clemens because no one from her community in Idaho had done it before. So when the opportunity presented itself to go to China, Clemens jumped at the chance.

She was a part of a group of 12 teachers who went to China on a scholarship. For two weeks, she learned about Chinese history while representing her school from Idaho. And when she got back, she couldn’t stop thinking of her time there. “[The trip] was the last push I needed to apply,” says Clemens. “Otherwise I don’t think I would have done it; it would have been too scary. I mean, I like to be challenged, but moving is a huge thing.”

Soon after she moved to China, Clemens found that the first couple of weeks were quite traumatizing and really made Clemens question her decision to go. She felt “zombie-like” while she was adjusting to life in a foreign country and would get quite frustrated when she couldn’t understand anyone around her and couldn’t be understood by the people around her.

“There were so many challenges—being worried, stressed, and scared for weeks. Frustrated. There were many times where I was just frustrated and felt like I just can’t do this, but I didn’t have a choice,” Clemens explains.

Luckily, the culture shock eventually wore off, and Clemens was able to experience the effects of moving abroad first-hand. She accepted the strangeness of it all, and China felt like home for a few years. Then, it was time to move to Romania—a place she saw as a new adventure—a new place to challenge her and make her grow as an international educator.

“[What I realized is that] everybody is striving to do the same things. We are all the same—wanting connection, wanting a home, wanting to succeed, and it doesn’t matter where you live or what the culture is; we’re all human.”

After three years at AISB, Clemens is moving to Egypt to teach middle school science at an international school in Alexandria. “My next culture shock!” she jokes. “I’m excited, but terrified at the same time. I chose it because it was so different from the two places I have taught abroad.”

Additionally, Clemens is moving to Egypt because it’s one of the few countries that doesn’t have an age limit for working visas. She explains that she actually got a job offer for a school in Thailand earlier this year, but after a closer look at her application she was denied due to her age (the country has a mandatory retirement age of 65).

“Many people expect older teachers to be done with work due to lack of motivation,” says Clemens, explaining that the perception that younger teachers are always better than older teachers makes it harder for people her age to get work. “But this isn’t always true.”

Clemens doesn’t plan on quitting teaching anytime soon. “Probably when I really tire out or I don’t feel like I have the energy anymore to teach, I will quit. I love my job; it’s my passion in life, and it’s fun to me. I’m lucky to have a passion that I can also have as my job.”

The Pechersk School International of Kyiv Community: Displaced Across Time Zones as the War Rages On