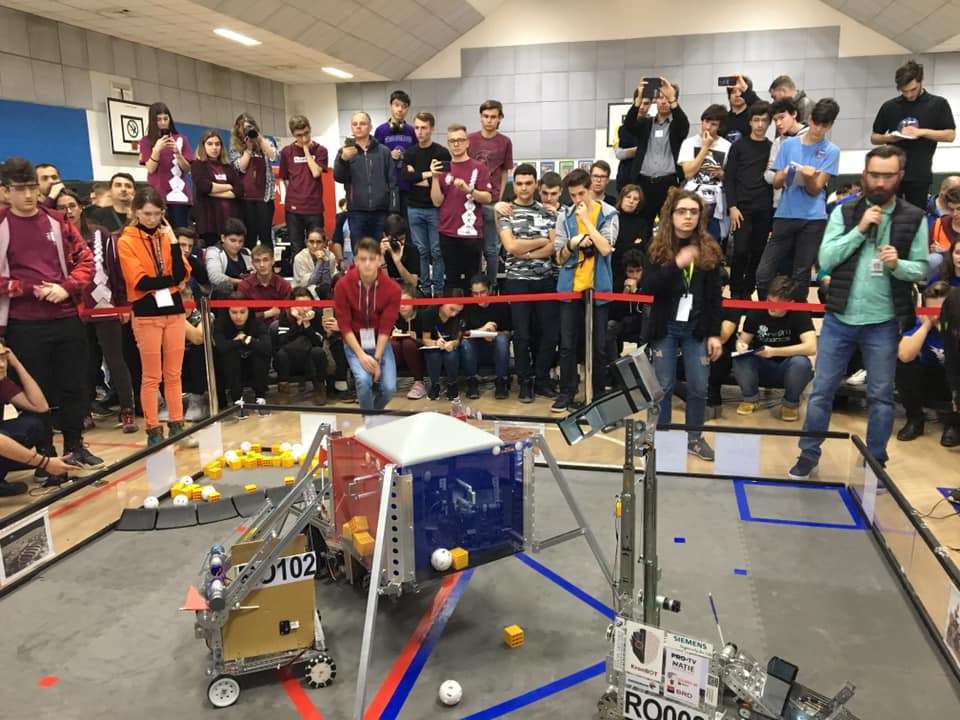 Last weekend, our high school Robotics team participated in the FIRST (For Inspiration and Recognition of Science and Technology) Tech Challenge Demo, a two-day regional-level competition, attracting 986 students from 65 teams throughout the country.

What is FIRST® Tech Challenge?

There are four Demo Regional competitions held in Romania each year–one of which took place at our school last weekend. Demo Regional is a practice tournament that allows students to gain experience and prepare for the Regional Competition in March.

What was the task?

The competition targets students from grades 7-12. This year’s First Tech Challenge was to design, build, and program the robot “Rover Ruckus” using Android technology and Java. To compete against other teams, the robot needed to be able to collect minerals and place them in their depot to score as many points as possible. Teams could also win points by performing specific driver controls, such as parking and latching.

Many different types of awards are given to teams that demonstrate the best robot designs, such as Inspire Winner, Willing Alliance, Think Winner, Motivate Award, and Design Award. These awards help the teams advance to the next competition, and are only given at Regional-level competitions and up.

“It was a good first experience,” says 9th grader Faraz. “ It was the first time for me to see how this kind of event works, and a really good opportunity to prepare for one we have this week (CEESA).”

Twelfth grader Alexandra P. added,“We’re very proud that we got second place. At the same time, we got to interact with so many different Romanian teams.”

This Friday and Saturday (February 8th and 9th), there will be another Robotics competition taking place in the AISB Secondary library: CEESA. The event will attract 10 teams from 9 countries, including our high school team. The winner of the CEESA competition will be eligible to attend the FIRST® World Championship on April 24-27.

The CEESA competition begins at 8AM on both Friday and Saturday. If you’re free this weekend, come and support the Vampires in the secondary library!

The New Schedule: Why The Change?