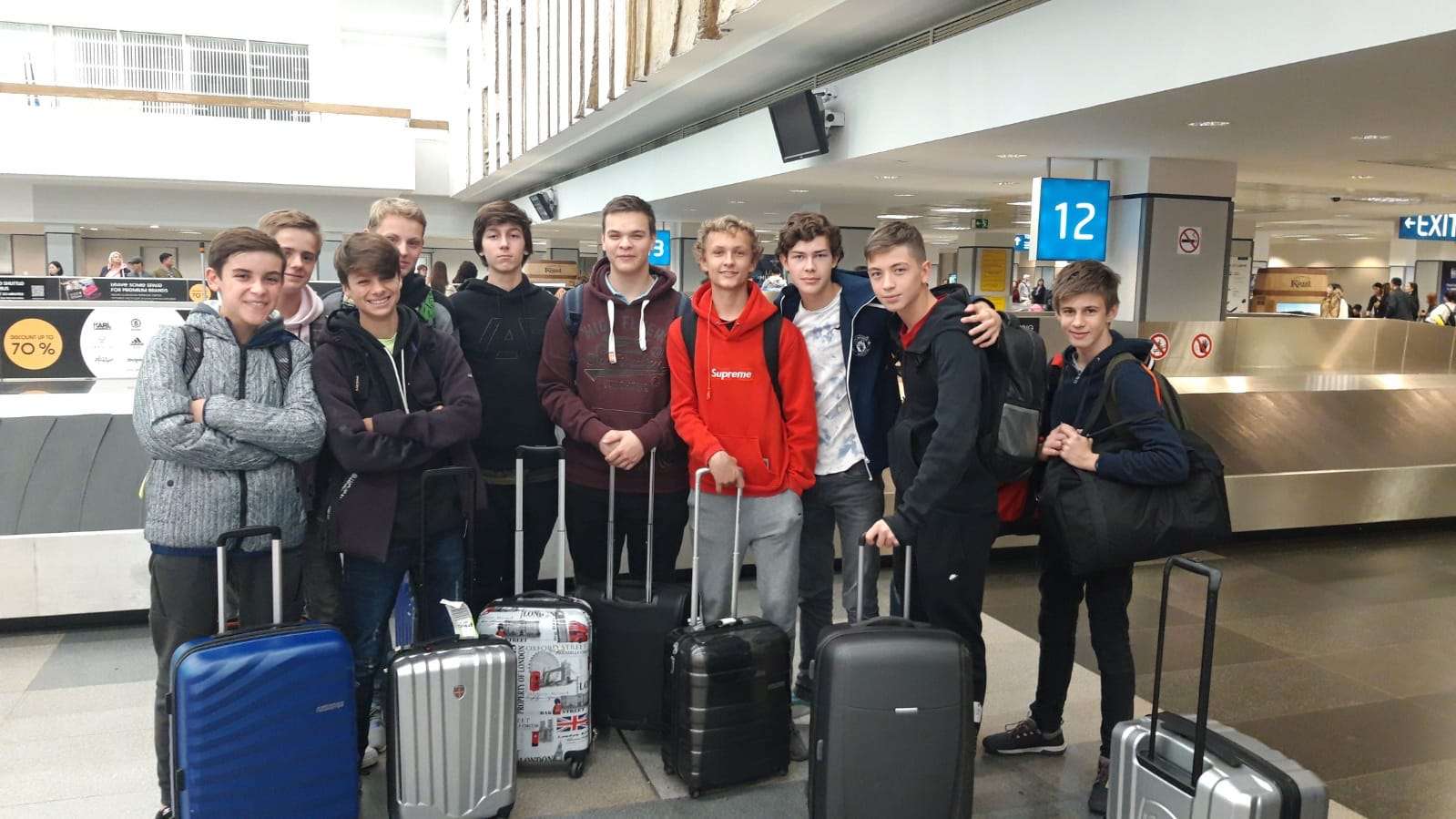 As you could tell from our vlog coverage and reports from last month’s CEESA events, there was a lot to celebrate. As a member of our high school’s JV football team, I had the chance to travel to Prague. It was an amazing weekend that I’ll never forget. Here’s a look at what happened.

We woke up at 7:30 in the morning to make ourselves ready for the first day of our tournament. By 8:30 all the competing schools had gathered together in the theatre.

It was really exciting this year because Prague hosted two CEESAs, with the high school girls’ volleyball as well. Whenever they had a game and we had some free time we would support them, and they would cheer for us when we played. That was amazing because we rarely had anything interesting to do when we weren’t playing.

That day we had a total of three games, one against Helsinki, then Baku, and finally Krakow. The first game was very tight, sadly they we managed to score at the last minute. The final whistle gave the score: 1-1.

“For our team, I think it wasn’t a very hard game because they were all the same size as our players. The harder games were against teams that had older and physically stronger players.” — Coach Marius Opran

After eating lunch we prepared for our second game. Just as the previous match, it was quite stressful because we needed to win this game if we wanted to have a chance of making the finals. The other team ended up scoring at the very last minute, and we lost 1-0, which completely devastated us. Our entire team was extremely frustrated and exhausted.

The last game of the day was against Krakow, known by all to be the best team in the tournament. We hadn’t won a game yet, so we weren’t thrilled to play against them. We ended up losing by 5-0, which was hard for us to take since this meant the Finals weren’t an option anymore. However, we knew that if we could win both of our games on Saturday, we could still make the 4th or even 3rd place in the Finals.

On Saturday, our team came to school prepared and full of determination. We still had some hope for a trophy, and we were ready to fight for it. Our first game was against Prague. It wasn’t a very tense game, as they didn’t take any accurate shots, so we won 4-0. Now, all we had to do was win against Helsinki. If we lost, it would be our last game of this CEESA tournament. Simply put, we had to win.

After a very tense first couple of minutes, we finally scored the first goal. We were winning 1-0, and anyone could see how focused the team was. Not much later we managed to score a second goal, making it 2-0. Luckily, Helsinki didn’t counter, and we won.

“After the first day, our expectations were not so high. So it felt amazing to see them qualify for the small finals.” — Coach Marius Opran

Being in the “small” finals, we had to play with Krakow again, the team we previously lost 5-0 from. And yet, we had won every game today, unlike Krakow who had lost all their games on Saturday so far. We had an amazing first half and were winning 2-0, but sadly they came back very fast and scored twice.

Both teams getting ready for our last game

With our heads bent down, everyone knew we had to score another goal otherwise, it was the end. After a small break for half-time, we gained the upper hand, pulling through with a 4-2. Victory seemed closer than ever.

Unfortunately, they managed to come back at the very last minute, scoring enough to even the scores. As the teams prepared to take penalties, the atmosphere grew even tenser. We did manage to pull through, winning an otherwise very close match in penalties with 5-4.

Me taking one of the decisive penalties

Our reaction when the final penalty went in

The comeback was an amazing experience, and we celebrated it with our friends. We sadly did have to wake up early the next day to catch the plane back home. All I can say is that participating in any type of activity where you can travel to compete is a terrific chance, and I highly recommend it.

“To see students having fun and making friends within our CEESA community is what it is all about” — Director of Athletics & Activities, David Hughes.

Share some highlights of your past CEESA trips in the comments below!

Photo Essay: What happened at our first-ever 'Mustache Bash'