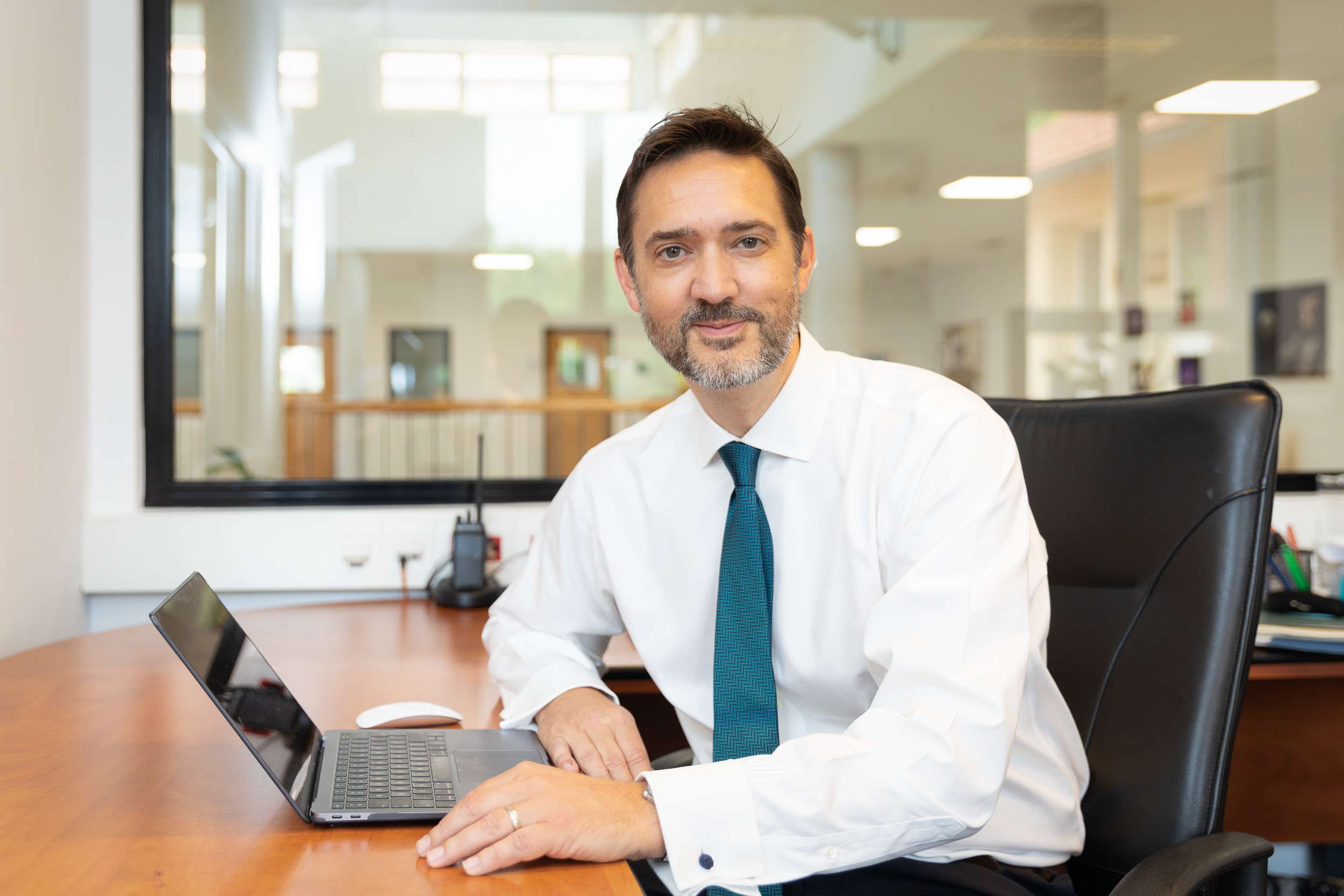 If you saw Peter Welch’s first speech to the student body, then you may recall that he introduced himself three times. And his introductions went somewhat like this:

Hello, my name is Peter Welch. I am the new director at AISB. I have spent my career living and working for schools all over the world. Romania is my eleventh different place to live.

Hello, my name is Peter Welch. I think of myself as an international person. I am passionate about history and politics. I am worried about the state of our world and believe that we face a crisis of leadership. And I wonder if some of the new leaders that our world needs could come from our students here.

Hello, my name is Peter Welch. Although I may not look like it, I am actually an African chief with special powers to make the cocoa trees grow in Ghana. I play the ukulele (very badly) and I am a lifelong Chelsea football club supporter.

While all these introductions are very different, they are also true–and prove Welch’s point: Our identities are much more than a collection of labels. To get to know the man behind these labels, we sat down for a chat. Here’s what he had to say.

From Helsinki, Finland to a Trip Across the Globe

At the end of the 2017-18 school year, Welch and his family left their home in Helsinki (where he was the director of ISH) to travel the world before moving to Romania.

For a year, they volunteered and explored. Listening to Stevie Wonder on the radio while driving in the midst of Lesotho, South Africa, Welch’s daughter simultaneously solved systems of equations by substitution in the backseat. They worked with marine conservationists to monitor whale and dolphin numbers off the coast of Portugal. They took care of primates in a wildlife sanctuary in Malaysia.

“It was an amazing experience,” says Welch. “[In Lesotho], we went to the place where my first volunteer teaching job was. I met a student which I taught 26 years ago. Going back to places where I have been before and to sort of step back into your story is really interesting.”

The family also stepped into new stories, making memories in the Borneo rainforest. Volunteering at the sanctuary with animals like orangutans, sun bears and different monkeys was hard work, according to Welch–but work that is very necessary.

The Borneo rainforest is currently being cleared for timber extraction. And as Welch and his family were right in the middle of such dramatic events, he says that, “seeing it for yourself, up front, [is] terrifying.” It brought home the sense of pace and urgency that humanity needs right now.

From World Traveler to AISB Director

Welch’s journey to being a director started in Africa, where he taught English as a volunteer. Soon afterward, he got his university degree in history and taught that subject for years, until he had his first school headship in Thailand.

“I did not plan to be the head of a school. It sort of happened to me. I was living in Canada when I was invited to apply for my first school headship in Thailand, but I wasn’t really thinking about it. It was someone I knew that thought I would be good for the job.”

As one can see, Welch has a rich history in the educational system. Not only as a director, but also as a teacher.

“There is skill in that communication that makes being a teacher and a director similar,” he says. However, “the scale of communication is different for the head. I might start my day speaking, as I did, to a four-year-old who is trying to close her umbrella, right through to senior diplomats or very high performing business people.”

Welch likes helping and making a difference in people’s lives (“a good day”). He admits that if he’s had a good day, he feels like he’s done his part. “And if I’ve had a bad day, I feel like I’ve not served people.”

Welch tells us that AISB “has a very bright, committed group of educators” and thinks the student body is very dynamic and multicultural. “I think it’s becoming interesting because people are really beginning to say what is on their mind. We are getting a bit more openness, dialogue and honesty.”

Welch praises the To Be Black: An AISB Experience article, as well as the story on Romania’s LGBTQ+ Community: Why AISB Needs to Lead the Charge on Acceptance. “People are actually saying what they think. Which is great.”

On the flip side, Welch notes that people are very busy–a huge contrast to his year of travel. He believes that when a school is this busy, it can lead to a lot of stress, and in turn, less effectiveness. “Slowing people down, to spend time on things they really care about, is what I’d like to happen,” he says.

Influences in Life and Education

When we asked Welch about the main influences in his life, he said it would definitely include his father. “My father was a priest. I did not take into life his religious faith, but I did learn a lot from his compassion and his kindness.”

Welch tells stories about how his father would take care of cancer patients at three o’clock in the morning–would comfort them when they were dying. “As a father,” he says, “he was interesting and he was different.”

Beyond that, Welch claims that he didn’t have the best of teachers, nor did he attend a “great school.” He feels lucky to have been able to go to a good university, as he wasn’t really interested in his undergraduate studies.

Because of this, a lot of his influence came from what he read. Another highly formative experience was in some of his development work in Africa, where he met “some incredibly heroic people doing this amazing stuff – they’ve been influences to me.”

His Plans for AISB’S Future

The school has grown incredibly in the last couple of years, not only in student numbers, but also in its campus. And as Dr. Brindley once said, “[Welch] is the perfect person to bring the school from growth into stasis.”

According to Welch, this means that we don’t need to “keep on hurtling forward,” but does clarify that “stasis in terms of learning is not what we are doing. We hope that ambition, in what we do, will remain high.”

A goal of Welch’s is to question what we’re doing. What do we actually care about as educators, as students, as parents? How will the world look in the future? How do we properly prepare this generation for what’s next?

When he talks to teachers, he finds that their answers are connected to people’s values and ethics–noting that “empathy” is something that comes up time and time again as the number one thing that needs to drive education.

So, is this the way forward? Welch says that this is “a very strong message coming from the teachers,” and that he’s “interested in seeing if our students and our parents are going to say the same thing.”

To get an idea, Welch is hosting a series of “future planning conversations” with the AISB community. Last week, he discussed “learning and the brain,” on October 22nd, he will present about “culture and learning” and on November 13th, “technology and learning,” in an attempt to better understand how to prepare students to thrive in an ever more connected world. These talks will take place from 8am-9:30am in CR13 and are open to parents and faculty.

Add to Mr. Welch’s conversations by answering his questions in the comment section below:

*Thanks to Mr. Welch for the great interview, and welcome to AISB!

'There is no Planet B': A Look into Bucharest's Climate Strikes

Get out of Town: Our Top 3 Destinations for the Upcoming Break