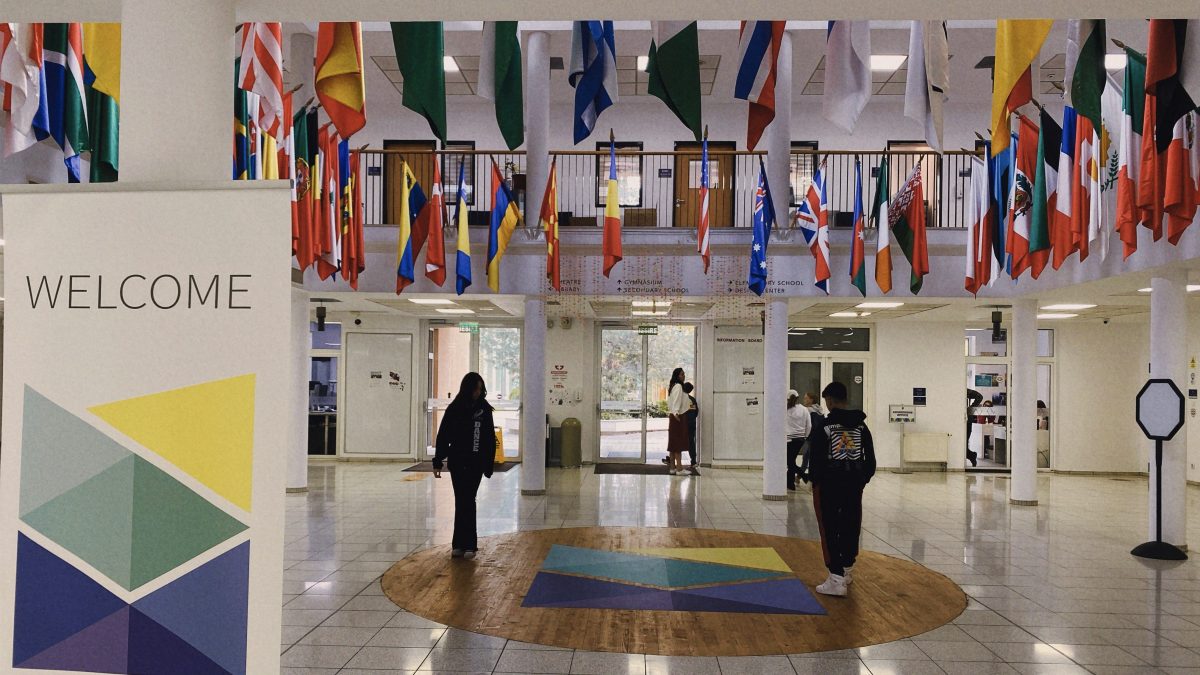 The new logos' appearance in the main atrium. (Photo by Darya Y.)

AISB recently introduced a new logo to our community along with an entire rebranding of the school’s marketing material, from signage to the website to the color palatte. AISB needed an upgrade as they have had the same logo design for a while and what better reason than the 60th anniversary of our school?

The story behind the new logo

The new AISB logo was a team effort, created by a small group of design and art teachers as well as members of the tech team. They worked on designing the logo to create a new representation of our school, choosing a logo and colors to represent the three divisions within the school: Early Learning Center, Elementary School and Secondary School.

The design team set out to create a more progressive design. Some inspiration for the logo included Romanian textiles which can be seen in the triangular shapes of the logo.

The logo has more significance than many might think, although it can come across as simple. Design and Journalism Teacher, Erik Peterson, who was part of the design team, says, “To look at a logo and think ‘I can do that’ is to some extent what you want. You want logos that are approachable.”

It took a lot of time and creativity to make the logo design the way it looks now. In fact, there were multiple concepts that all followed similar ideals. Each of these concepts was meaningful to the school.

Very few people could actually differentiate between the official AISB logo and the Athletics logo.

Not being able to identify the difference between the schools’ logos was one of the factors that truly revealed the need for an upgrade in the logo.

A promotional video for the school stated that an upgraded logo gave AISB a chance to create a new brand for the school and an opportunity to use new marketing strategies.

The previous logo was not displayed as much around the school but this one can be found almost everywhere. For instance, the logo is displayed at the entrance of the school and even in the atrium. Therefore, students and staff are more exposed to the rebranding of the school.

First reactions to the logo

The Bite sent a survey to students and staff asking for their opinions on the new logo. About 48.3 percent of the respondents dislike the logo, 31 percent like the logo, and 20.7 percent aren’t sure. An anonymous responder described the new logo in flattering terms:

While you can take our sample size of 30 respondents with some reservation, a consistent pattern of students and staff agree that the logo has reduced the amount of complexity in the design due to it having fewer elements than before.

One respondent, who prefers the old logo, says the new logo “doesn’t inspire like the old one and doesn’t represent the school in any way. I just see a bunch of shapes that don’t mean anything. I’m pretty disappointed by it.”

A respondent, who prefers the new logo, wrote: “Compared to the old logo, which was dated and difficult to see from a distance, this one is an improvement.”

An ambivalent respondent wrote: “It is fine, not as good as the old one and looks a little generic, and does not have as much school spirit as the old one.”

It seems as if the opinions on the new logo is much more complex than a seal of approval or disapproval.

According to Harvard Business Review, people resist change because they fear a loss of control or ripple effects. So, it might be that students and staff are scared of losing school spirit, or even the familiarity they feel for the school.

Needing a larger sample size than the 30 Google Form-friendly people who responded to our survey, The Bite walked around campus, holding up images of the two logos, asking people their preferences, and why. Exactly 100 students and faculty members were asked about their preferences, and 37 students said they preferred the new logo while 63 said they liked the old one more.

Generally, people who chose the old logo stated they were more accustomed to the old logo—which correlates with the previously mentioned study about resistance to change—or they simply dislike the new one.

Those who prefer the new logo, in general, admire the color scheme and simple, bold look that stands out.

It turns out that the new design was intended to stand out from other schools’ logos, establishing our school as a unique institution.

Compared to the new logo, Peterson says that the old logo with the “globe with longitude lines and kids holding hands with different sizes was cliche. If you google ‘international school logos’ you will predominantly find kids holding hands across the globe or some kind of crest.”

So in some ways, the design may be successful because it makes a mark that is new, different and stands out from others, even if some would prefer it to blend in the background.

But don’t take our word for it! Join the conversation and share your thoughts on the new logo. Leave your opinions and suggestions in the comments below!