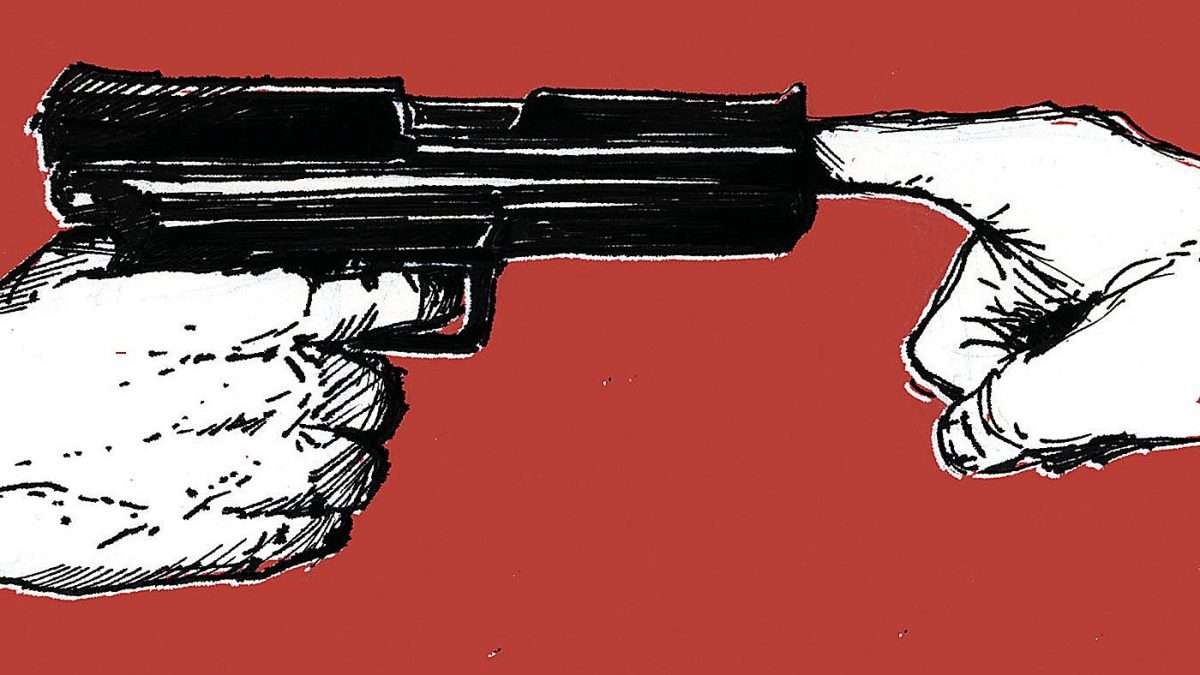 These statistics are startling; but for many, not surprising. Known for having “the weakest gun laws and the most guns of any comparable nation,” gun control advocacy groups have been calling for stricter laws and background checks for a long time. But with “the right to bear arms” so deeply engrained into the fabric of America, the topic is a heated one—and one of the most divisive.

To understand some of the nuances behind the gun debate, we talked to several AISB teachers with various perspectives and backgrounds.

Ryan Wahrenbrock on hunting, gun ownership, and the importance of mental health checks

Ryan Wahrenbrock is a third grade teacher at AISB. Growing up in Elko, a town in rural Nevada where hunting is part of his culture, he owns a collection of guns (full article about him can be found here).

He was gifted a hunter’s safety class, along with his first hunting rifle on his 13th birthday, as a “right of passage.” Wahrenbrock explains that where he comes from, this is pretty common. He also points out that hunting is very regulated. “They fly the planes out, they count the number of animals, and they decide how many animals are sustainable in areas, and then you’re allowed to hunt a certain time in a certain area.” This allows for responsible hunting and gun use, Wahrenbrock explains. “The guns that I own are more for hunting animals as opposed to people, which is clearly a different purpose.”

While gun owners are often stereotyped as conservative, Wahrenbrock admits he voted for the Democrat candidate Joe Biden in the last election. “I wouldn’t say that I am a liberal,” he says, “but I have voted more with my heart.”

“It’s very hard to have a one size fits all. If you ask most of my family who lives in California, they would say that nobody should have guns; but if you ask the people from where I’m from, four hours away by car from any major city, they would say the opposite.”

While Wahrenbrock is an advocate for “more background checks and stricter laws on getting guns,” he thinks that a potential buy-back program isn’t the answer, as “people who want to own a gun illegally or an illegal gun, are going to find it just like anything else.”

For him, it is a societal problem that needs to be addressed from the roots in order to be solved. “There needs to be a better social and healthcare service,” he explains. “I feel like it’s a bigger problem than guns. I feel like it’s more of taking care of people who are mentally unstable and having therapy for those who need it.”

To conclude his opinion on the measures taken by the government to tackle the problem, he thinks that “When looking at the shootings and the guns and the aftermath… If we only attack one part of it, we’re still not really solving the problem.”

Jacqueline Whitney on polarization, the Second Amendment, and the issue of guns being a “societal issue”

Jacqueline Whitney is a MYP Humanities and DP Geography teacher. She grew up in the state of New York, on Long Island—a place she describes as an “idyllic little suburban town.”

Nobody that she knew owned a gun. “I lived in a safe community; there weren’t really high crime rates,” she says. There wasn’t much of a hunting culture either, even though “people could do a weekend trip to upstate New York if they wanted to do that.”

“Even when I went to New York City, I never thought about being shot. It wasn’t like it is now where there is such pervasive violence on the news and repetitive mass shootings.”

Whitney only really became “aware” of gun violence during her last year at university in 1999, when the first mass school shooting took place in Columbine. What also struck her at the time was a song by a band called Pearl Jam. “Music videos were the big thing then. And there was this particular one in the ‘Jeremy’ song where a kid shot himself in front of his classroom, and that was really preposterous to think something like that could happen.”

The mass shootings and the escalating violence led her to advocate for more “stringent gun control and background checks” but she insists “I am not against guns. I think that part of the polarization issue around the gun debate in America is that people who want stricter guidelines are often branded as being against guns and ‘we want to take your guns away’. I am not in a position to say nobody should have a gun.”

Whitney does think, however, there should be a certain “cap” for which weapons civilians could own. “A civilian can’t have state-of-the-art weaponry that the police don’t walk around on the street with,” she says. “I see no reason why a civilian should have a semi automatic rifle or assault weapon of any kind.”

“A well regulated Militia, being necessary to the security of a free State, the right of the people to keep and bear Arms, shall not be infringed.” —The Second Amendment

Often brought up by pro-guns partisans, the Second Amendment makes owning guns a right that they can’t be stripped of. For Whitney, you have to take into account the context of the time in was written. “Americans needed to protect themselves from a foreign threat,” she explains. “Now you have ‘Stand Your Ground’ laws in Florida, for example, which is the reason why Trayvon Martin-a black teenager walking home-was killed.

Despite this, Whitney doesn’t see the Second Amendment as the problem. “There are plenty of responsible gun owners I think. I dislike hunting but it’s not hunters who are walking into schools, movie theaters, grocery stores. It’s something that has become more of a societal issue around racism, xenophobia that have been fueled by fear and bigotry.”

Finally, she also thinks that there is the aspect of mental health which needs to be addressed. “I don’t want to negate the whole discussion around mental health services. When you look at the people committing these shootings, it is clear that they have mental health issues. I think that it is absolutely needed, but it shouldn’t be in opposition to gun control, as it leaves us in this stalemate which is where we are today.”

Luke Scholtes on The Port Arthur Massacre, gun reform in Australia, and how it could be applied to America

On April 28th 1996, on the island of Tasmania in historic Port Arthur, Martin Bryant pulled out two semi-automatic weapons (one of which was an AR15), killing 35 people and injuring 23. He had obtained the guns without needing to show a license.

This event was a turning point for Australia. In just 12 days, all six Australian states agreed on a reform of gun laws, banning semi-automatic weapons and shotguns, adding a 28-day period of checks before being able to own a gun, and disallowing “protecting myself” as a reason to buy one.

Luke Scholtes, an MYP science teacher, was 12 when the shooting happened. “When you’re very young, you don’t have enough context to process these things, but I do remember that it was all over the news,” he says. “It was a terrible thing and the whole country was in a state of shock and grief.”

When the new gun laws passed, Scholtes recounts the reactions being positive—even among the hunting community in his small hometown of Dingee, Australia. “The people that I knew who were shooters weren’t too upset about the new laws,” he says. “They didn’t feel like they needed semi-automatic weapons to hunt ducks. A couple of people felt like it was better to have one, but I don’t think anybody was really protesting or angry about it.”

In the years since, approximately 1 million semi-automatic weapons have been sold back to the government (an estimated third of the country’s firearms). Mass shootings reduced from 11 in the decade before 1996 to zero.

“Its not to say that shootings were a huge problem before that, but these measures have prevented loss of lives,” says Scholtes. “As I’ve grown older and I see the damage guns can do, I thank goodness that the government was able to do that. I think it was a huge positive for Australia.”

With America’s continued increase in mass shootings, Scholtes hopes Biden will take the same path as Australia. “Every time I see another one of these incidents…take a pick from the bags of emotions: disgust, sadness, exhaustion. I can’t keep hearing about these stories and watching this inaction from the government— yet alone that I now am married to a woman from the United States.”

For Scholtes, the arguments advanced by those who want to keep their guns because it’s “their right” simply don’t hold up. “The Second Amendment is so ambiguous,” he says. “It was meant for a well organized militia and not just ordinary citizens to get an AK47. They couldn’t have predicted how technologies advanced; they were talking about muskets, which took a minute to load. When you’re walking in the street with a gun and if you shoot another person, you’ve taken away the freedom of that other person.”

The laws put into place in Australia went through easily, and within two weeks. In America, these same actions prove extremely difficult. For Scholtes, it’s because of an “entrenched way of thinking.” He says, “People need to stop thinking so much about party expectations and votes and focus more on saving lives.”

At the start of April, US President Joe Biden took six executive actions (actions not requiring Senate approval, proposing a new rule for “ghost” guns (homemade guns with no traceability) and tightening regulations on pistols with stabilizing braces. This is a start, but gun reform lobbyists say it’s not enough.

For the more impactful actions he presented in his campaign, including banning assault weapons and high capacity magazines, Biden will need the vote of the Senate. And since this means getting 60 votes (which represents all the Democratic members plus 10 Republicans), it’s highly unlikely.

So, what’s the answer? How can America move past its tragic death tolls while upholding the second amendment? There’s no easy solution, but if Americans wants to stop mourning the victims of gun violence, they need to come together and act now.

The Pechersk School International of Kyiv Community: Displaced Across Time Zones as the War Rages On