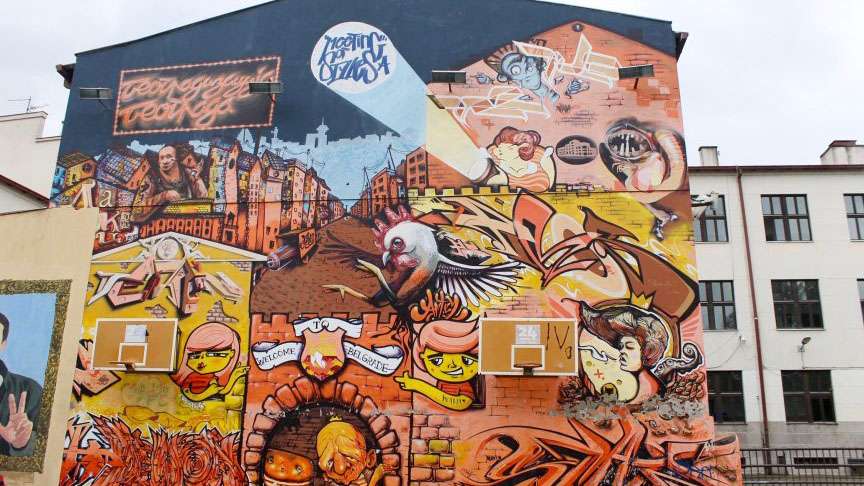 Graffiti is commonly thought of as the destroying of personal property by scribbling with a spray can. In Belgrade, however, the word has a much different meaning.

The people who decorate the buildings of Serbia’s capital usually have a message or cause they want to share with the city. From simple doodles telling people to go vegan, to complex and realistic-looking portraits of people, Belgrade’s graffiti catches the eye of many.

Seven students from AISB went to Belgrade for ISTA, a theater event.  Along with three other schools, we toured around the city for one day to gain inspiration for a theater piece. According to Marina Davatelis, a student from the Wiesbaden school, these pieces of graffiti “all had personalities. One piece of graffiti can be screaming one message, while another just a block away is shouting a different message.” 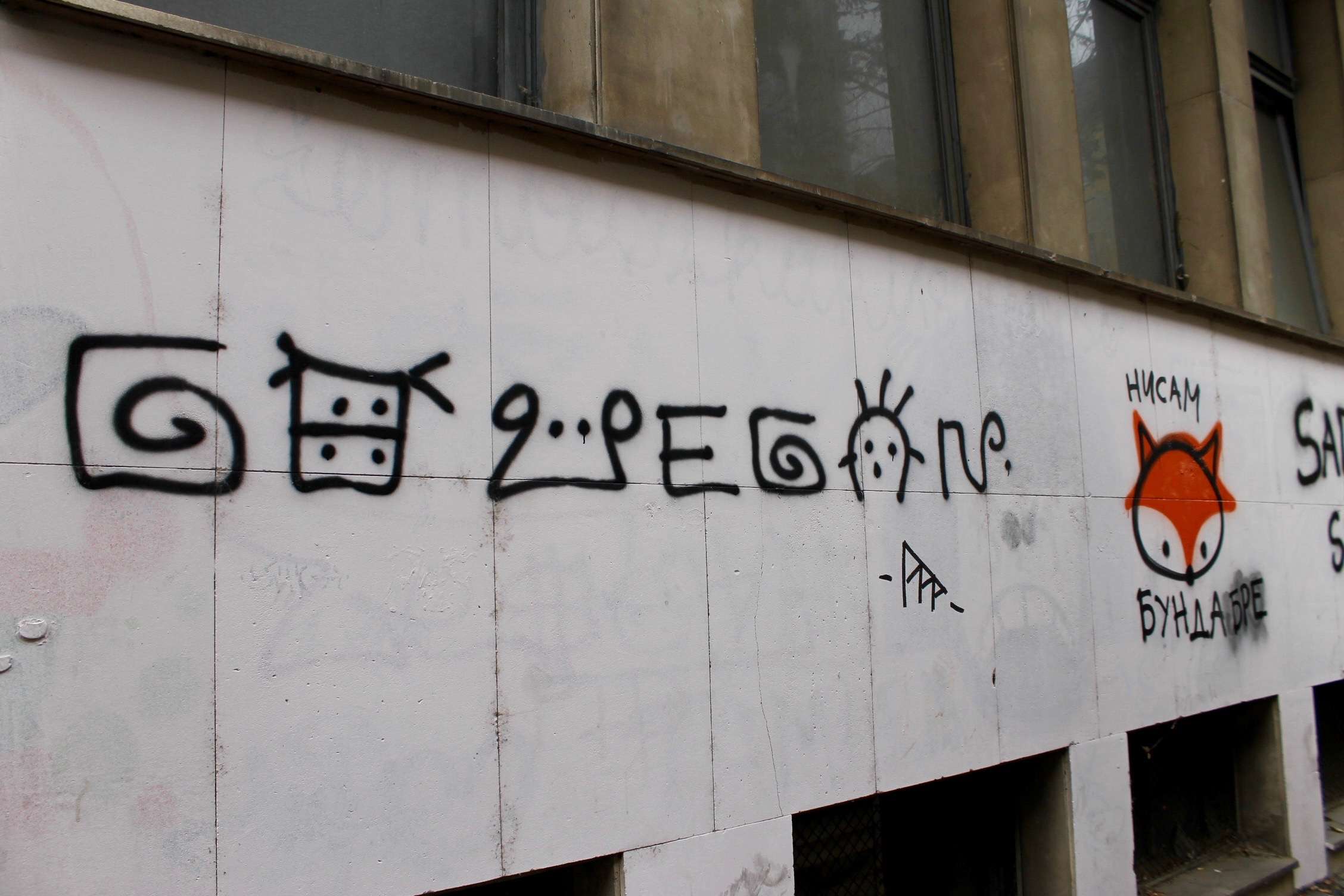 These simple yet meaningful pieces of graffiti can be seen all throughout Belgrade. One theme that is consistent, despite the country’s meat-heavy culinary tradition, is veganism. These cutesy-looking graffiti pieces aim to change peoples’ minds, and the simple slogan of “Go vegan” gets the message across. 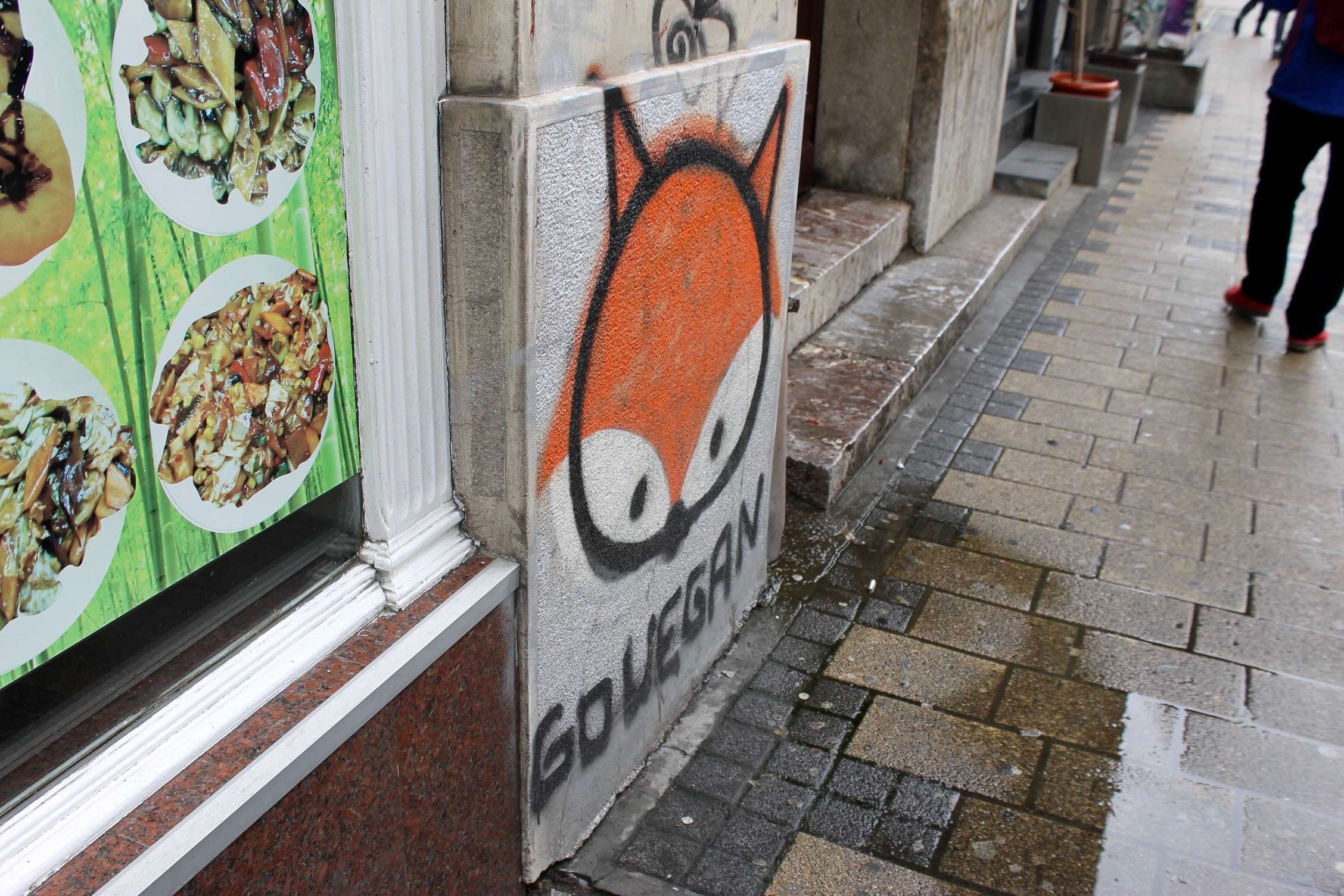 This piece of graffiti has been placed next to a restaurant. Its meaty menu can be seen next to the picture of the fox. Although not too many people eat foxes, its cartoon-like face and orange fur draws attention. 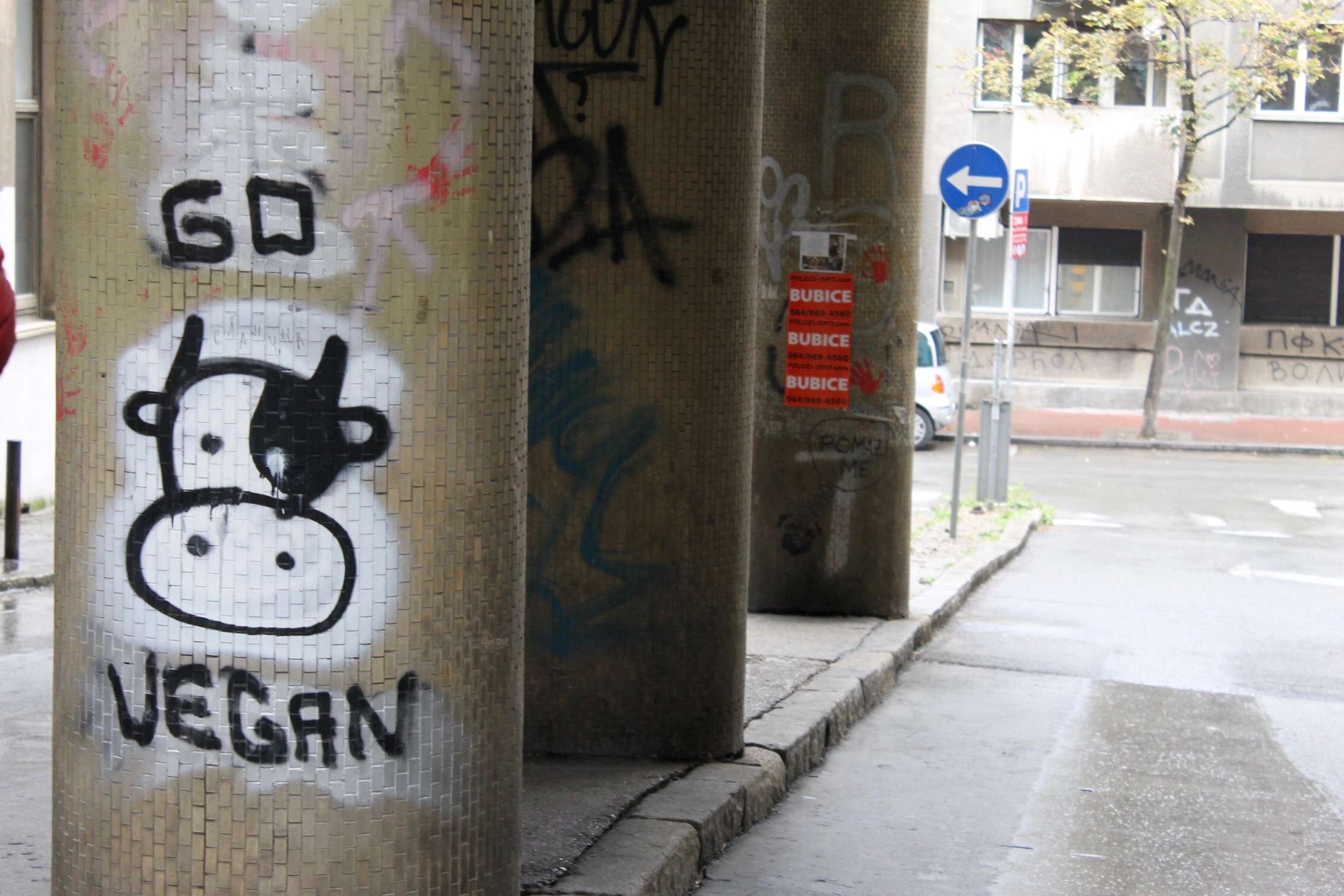 Many other pieces of graffiti can be seen on neighboring columns, but the bright white of this cow stands out against the beige. 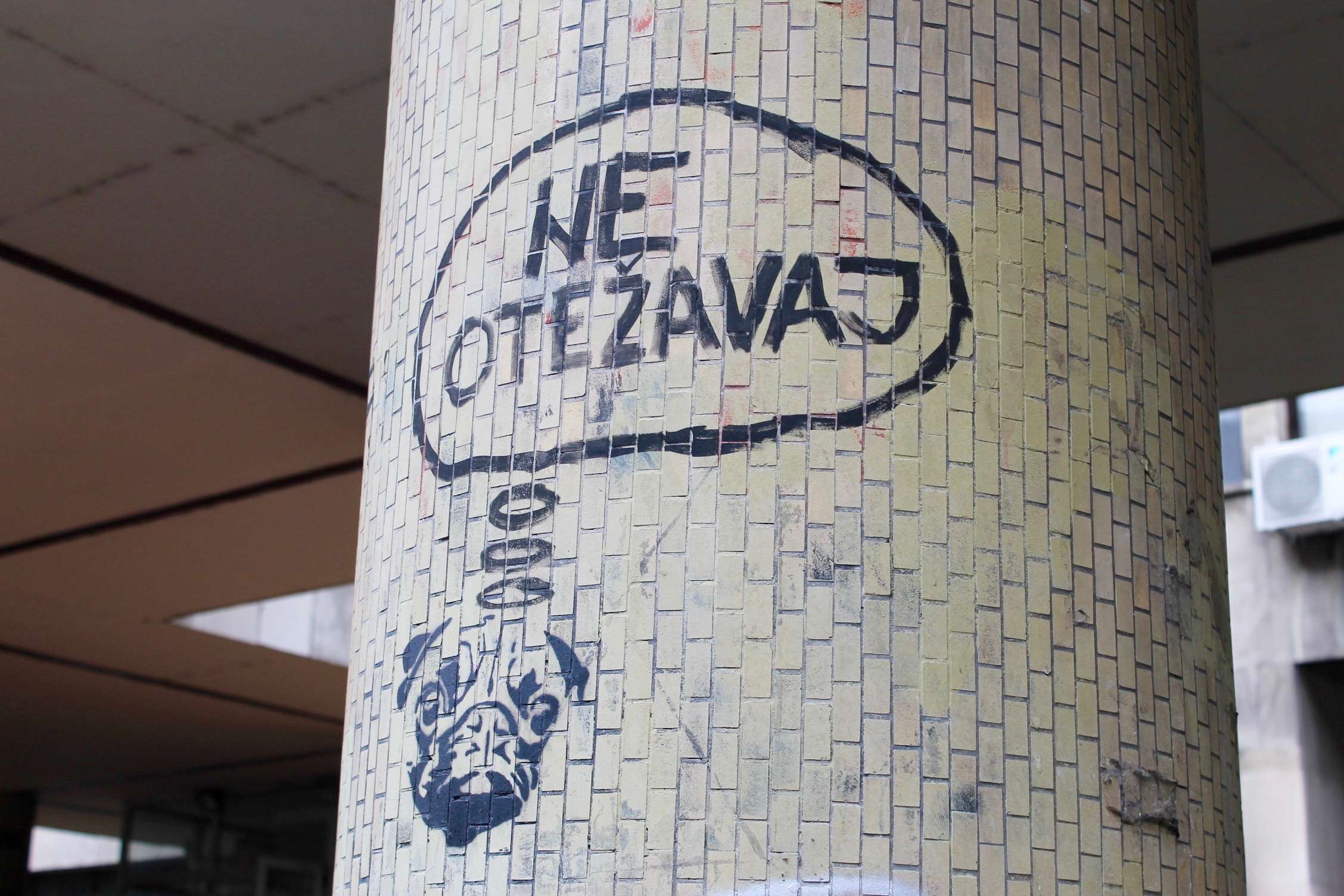 Sitting right above the cow, this stenciled pug saves graffiti artists from staying in one place for too long. These graffiti pieces may be interesting, but it is still illegal to vandalize. Simply translated, this pug says “Don’t hurt me.” 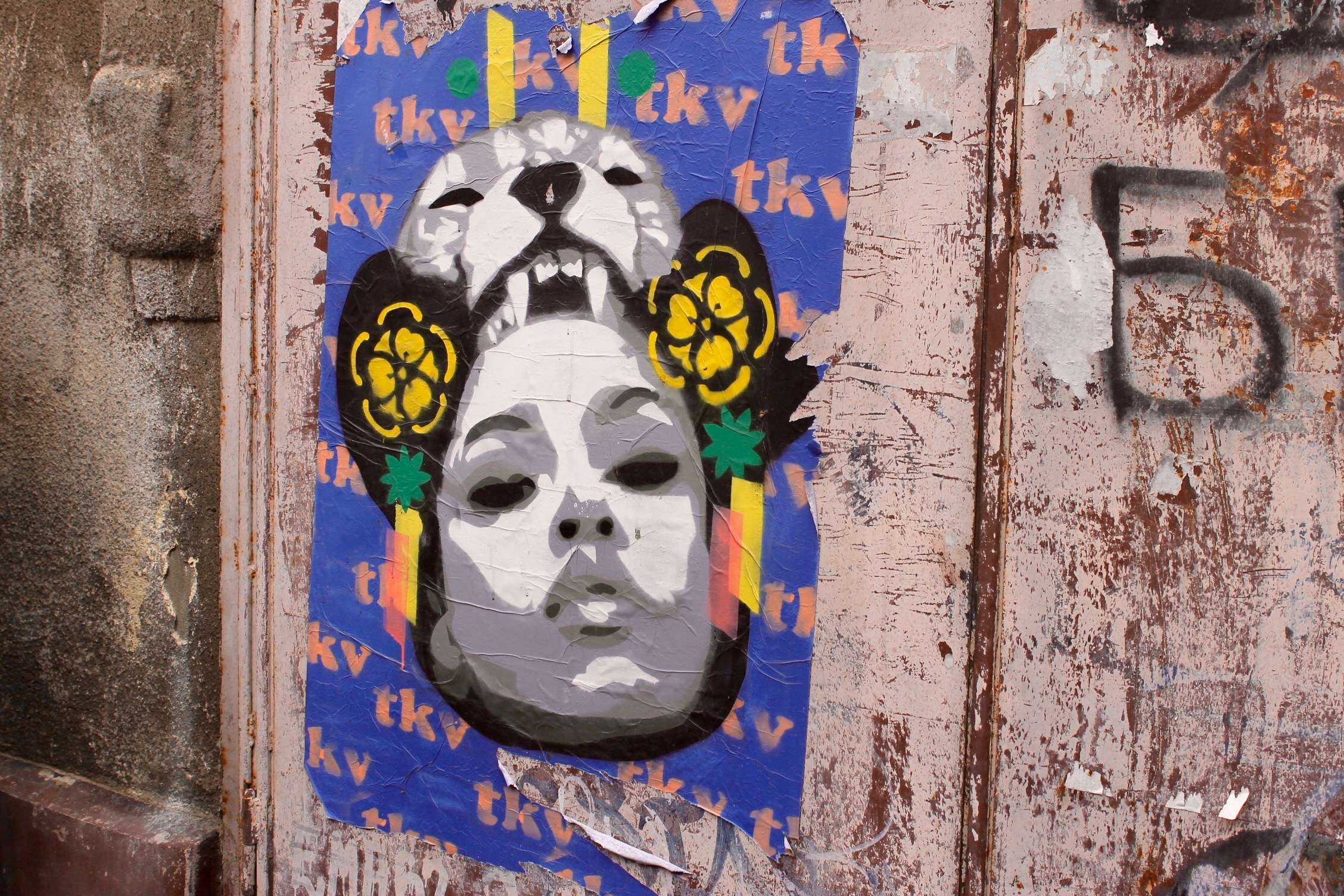 Tkv is a popular graffiti artist. Even though she stays anonymous, many know her for her pieces that are placed around Belgrade. Her art centers around women; and although she hasn’t come out and commented on her pieces, most people believe that her work is about female empowerment. 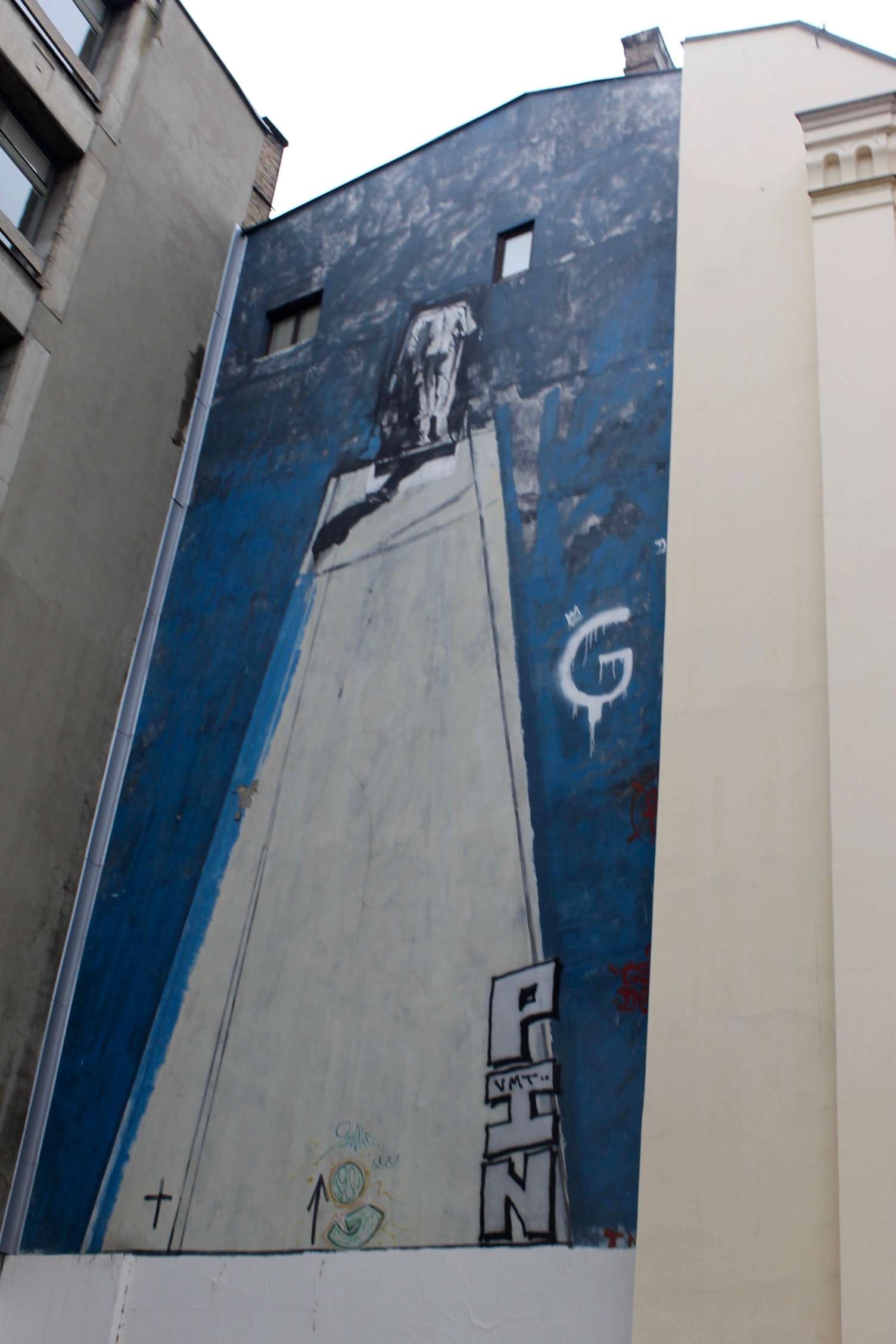 ‘Tagging’ is when a graffiti artist puts their signature on their work to show that it’s theirs. It doesn’t necessarily have to be their name; it could be a symbol that is consistently in their work, or a unique graffiti style. According to the tour guide, some people have added their own tags to someone else’s art, to make it appear as though they have made this piece.

While graffiti is beautiful and can be used to say so many things, people forget this is vandalism and destroying of property. Ipek Ozkan from the British school of Bucharest said, “I just think about all the people who put work into doing something that might not be there the next day. Although they’re beautiful pieces of art, it’s still illegal. It’s not in a museum, where people aren’t allowed to touch.”

That is what is interesting about graffiti. Anybody can see it, but it might not be there tomorrow. It’s a way for people to spread messages and their love of art, but at what cost? And how long before all of it’s erased from Belgrade’s cityscape? Only time will tell.

Top 5 Places to Travel in Romania this October Break

WATCH: A Virtual Tour of the DP Art Exhibitions