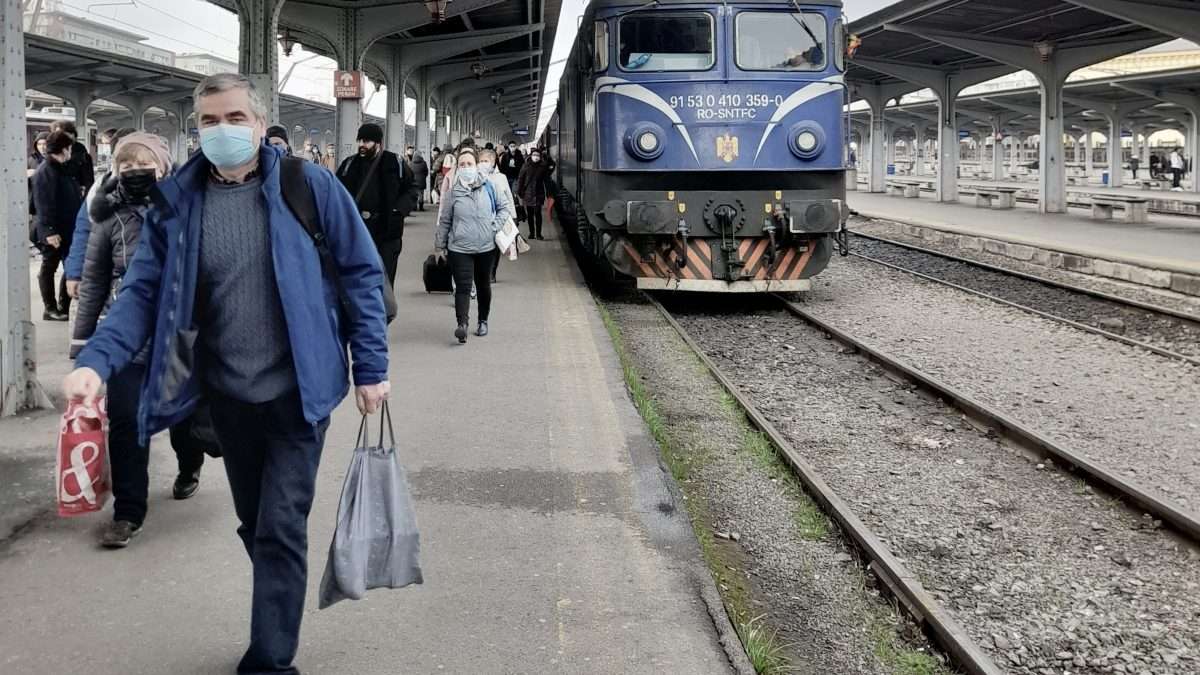 As the war intensifies and people from Ukraine continue to flee their homes, feelings of chaos and uncertainty escalate in neighboring countries. Given Romania’s border with Ukraine, it was anticipated that many refugees would enter the country seeking asylum and support.

It was early in the morning on March 3rd, and Gara de Nord received its travelers with finger-numbing cold weather. People walked the platforms, caved into themselves, eyes cast down, as the wind blew against their hooded coats.

Hanging from the station’s ceiling, a sign with the Ukrainian flag welcomed refugees, and announced: “For Otopeni Airport, train on lines 8 and 9.”

Just inside the station stood a bright red tent, where police officers and first responders awaited the trains from Suceava (the nearest city to the Siret border crossing).

Authorities were there to register the refugees and offer government housing and transportation. Yet, many people walked past the tent, to a waiting room serviced by volunteers from ADRA.

The first responder tent was organized and well attended, yet it seemed that people were more comforted by the NGOs’ services and volunteers.

As one of the refugees told us, “There were more volunteers at the border than police officers.”

In front of the waiting room, we met one of the ADRA volunteers, Cristina, who gave us some insight and offered us vests to go inside and talk to some of the refugees. She had already been there for hours and said most of the people inside were in transit, trying to figure out where to go.

“Most of these people don’t want government accommodation,” she told us. “They are worried about overcrowded schools.” After the trauma of leaving their homes, many refugees are hoping for some place quiet and private.

Inside the train station’s waiting room, refugees made use of the assortment of donations ranging from food to clothing and makeshift beds.

Dasha, a twenty-year-old university student, told us about her journey from Kyiv to Bucharest. Just two weeks ago she was studying for exams at her university, and now she was escaping from war. Two days prior to our interview she had crossed the Siret border by foot all by herself and was now looking for flights to reunite with her family in Turkey.

When asked about her hometown, she explained that it’s located 30km from the Russian border. Immediately afterwards, her expression changed and she let out a big sigh. “The situation is really hard there.”

The uncertainty felt by refugees arriving at Gara de Nord is overwhelming. They’ve arrived at an unknown place where an unknown language is spoken. Relying on the use of basic hand gestures and Google Translate, government officials and volunteers do their best; but without language, context and comfort is often lost.

When asking volunteers what they needed, the answer from everyone was overwhelmingly “translators.” They explained that they have received an enormous amount of donations, but what they need more than anything is people who can speak Ukrainian and Russian.

We left the waiting room to greet people coming from train IR 1750, which was expected to arrive within 15 minutes from Suceava.

Volunteers, police, and news teams readied themselves in front of the platforms, and government first responders prepared for the influx of soon-arriving refugees that would need food, water, directions and advice on whether to stay in Bucharest or continue their journey somewhere else.

Upon arrival, the train’s operator peeked out one of the doors and looked back to the tracks. At first, it was hard to tell who was transiting and who was fleeing from Ukraine. But once we returned to the first responder tent, dozens of people began rushing to find information.

At the waiting room, the atmosphere had drastically changed. As more refugees arrived, things became less organized and more chaotic. Tensions were mounting and volunteers were panicking, alerting others that space inside the waiting room had run out.

During the erupted chaos, we noticed many refugees who were confused and disoriented. The few translators were doing their best, but they were overwhelmed, and people wanted answers.

Two of our Russian-speaking reporters stepped in to help a family who needed information. They were able to direct them to the waiting room and somewhat ease their fears because of the shared language. But both of our team members felt like it wasn’t enough. They ended up volunteering over the weekend, providing logistical information and helping to coordinate transportation and housing.

While almost everyone in the waiting room were women and children, we noticed a large group of men outside the Springtime restaurant. Knowing that Ukrainian men aged 18 to 60 were banned from leaving the country, we asked police officers to give us information.

They informed us that these men held passports from Turkmenistan and Kazakhstan, likely to be students fleeing Ukraine, and were trying to make plans where to go next.

One of the ADRA volunteers said they’ve been seeing a lot of refugees who hold Central Asian passports, struggling to get political refugee status. She explained that because they are not from the EU, they have a very limited amount of time they’re able to stay in an EU country. And since many are students, they’re also worried about what whether or not they’ll be able to continue their studies or what their futures will look like after leaving Ukraine.

As we were leaving the station, we saw a family of refugees being interviewed by a CNN reporter. A few hours earlier, this journalist interviewed some of us, to find out what we were doing.

As misinformation is being spread more than ever before, we were happy to see on-the-ground journalists, thoughtfully reporting what’s happening. We were also thankful for the opportunity to gain some important perspective, even though we left Gara de Nord with more questions than when we arrived.

If you are living in Bucharest and speak Ukrainian or Russian and are able to volunteer, there is a desperate need for translators/guides at Gara de Nord train station. This would mean meeting and greeting refugees, providing necessary information, helping to find places to stay and arranging transportation.

If you know anyone who is arriving or transiting in Romania, here is a helpful guide written in Ukrainian. And if you are an English speaker looking to help, here is the document in English.