Bucharest’s run-down buildings: the silent testimony of decades of neglect 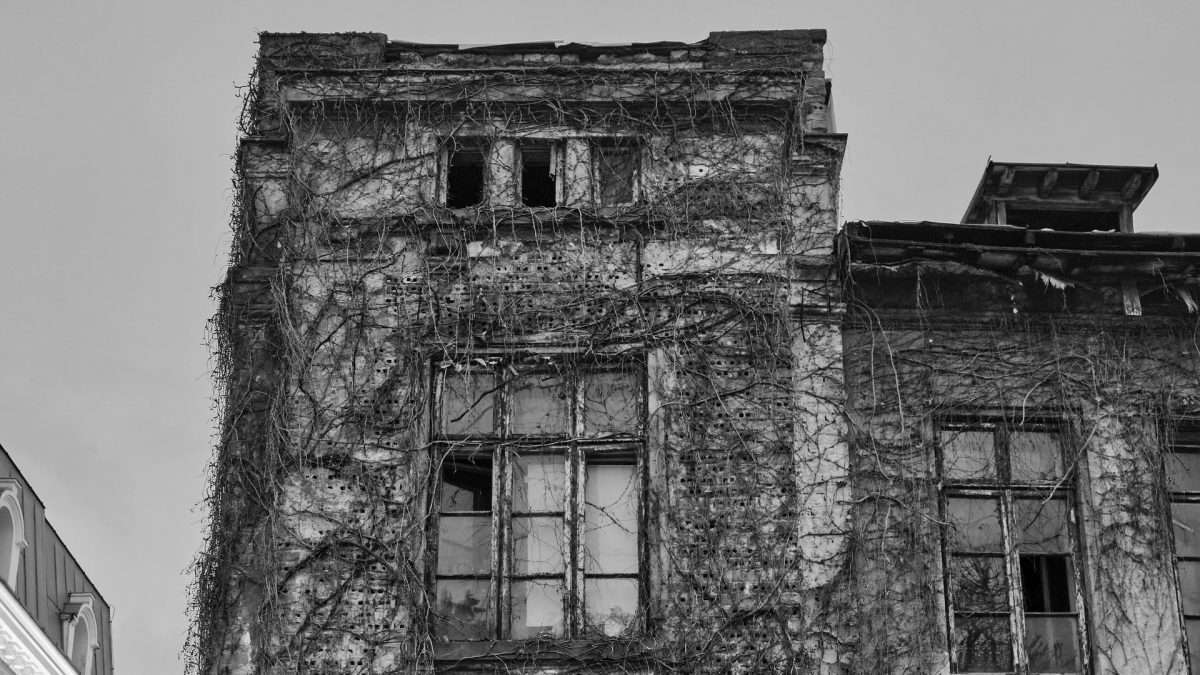 On the cramped side streets leading to Piața Revoluției (Revolution Square), crumbling townhouses stand timidly—with peeling paint, rooftops that are covered in rust; windows either missing or shattered. But if you look long enough, elegant Parisian columns and expertly crafted wooden window frames reveal themselves, reminding passersby of glory days long ago.

These buildings, once so elegant, are now relics of their time. Scarred with bullet-pierced facades, they stand as mute witnesses to one of the biggest moments of change in this country’s history: the Romanian Revolution.

Bucharest and the great need to preserve

Countless buildings in the city are destined to disappear, along with the history they so naturally reflect. Unless restored, they will turn into mere ruins of the past.

“Many of [the buildings] are very damaged and people pass by them, like they hold no value.”

Dan Marin is a Romanian architect and a professor of architecture at the Ion Mincu University of Architecture and Urbanism in Bucharest. He is one of the leading voices in the fight to save Bucharest and preserve its great architectural and historical heritage. He stresses the importance of well-organized, systematic restorations, in order to bring back the city’s lost beauty.

“The direction of restoring the historical heritage, at this time, is at an all-time low,” says Marin. “With extremely few exceptions, there isn’t any interest, any action in this sense.”

But what should restorations look like and how should the owners of these deteriorating buildings embark on this task?

In Bucharest, over 2,000 buildings classify as “historical monuments,” a distinction given to buildings by Romania’s Ministry of Culture, based on a number of criteria: the time period they were built, their architectural value, their level of uniqueness, and their memorial value. Yet, even with such an abundance of valuable buildings, often dating many decades ago, few laws are in place in regards to their restoration.

Often owned by citizens or private institutions, the burden of gathering funds for reconstructions, as well as conducting the projects, falls on inexperienced residents. And without government assistance, most of these projects don’t get past the planning stage.

There is hope though, as Bucharest’s City Hall recently proposed an ambitious new project, which would fund the restorations of Historical Monuments, as well as other buildings of great heritage in the city. Additional specialized consultancy would be offered within this program, to ensure the rehabilitation and appreciation of Bucharest’s architectural and historical heritage.

So the question now is: why do these buildings need to be kept alive and functioning? Why not give in to the current tendencies of building tall, modern skyscrapers and demolishing the old?

As it becomes increasingly difficult to truly understand the past and relate to events that happened decades ago, architecture stands out as an innovative way of achieving this. Restoring these decaying buildings means giving them the voice to convey the history they witnessed throughout the last century.

One building that does this particularly well is Casa Păucescu (Păucescu House). Situated in the heart of the city, in Piața Revoluției (Revolution Square), this house takes us back to December of 1989, the Romanian Revolution.

A blend between old and new, the original facade is now a shell to the tall, glass structure, home to an office building. With a closer look, the burned, raw brick, tainted by bullet holes marks an ever growing time and space continuum, between the fall of the communist regime and the present. The night of the 23rd of December unveils in front of our eyes.

During Ceaușescu’s rule, Casa Păucescu belonged to the communist party, being used as administrative headquarters. As the Romanian Revolution unravelled, tensions grew in Piața Revoluției, where the majority of protestors were gathered.

The night of the 22nd of December, the building was set on fire and its interior was completely destroyed. It was left in its ruined state for over a decade, being deemed a Historical Monument in 1992. This led to a project conducted by Marin, who restored the remains of the ruin—building, at the same time, a new body, clearly detached, historically, from the house, anchoring it to the present.

“It points out this specific moment in time, aside from its architectural value,” Marin explains.

History radiates from the crumbling buildings all over the city. Their bullet-pierced facades, soot-stained walls and shattered glass windows are the reminders of a painful past, taking us back to the most important events in Romanian history. Casa Păucescu is an example of the power of restored buildings, witnesses of a moment that changed this country forever.

Architecture has become the most accessible and effective way to keep this history alive; walking down the streets of Bucharest means walking through time, surrounded by stories that take us back to years past.

A brief history of Bucharest

When looking back at Bucharest throughout the years, we come to realize that its history is short-lived, compared to its European counterparts. In fact, in the first half of the 19th century, it wasn’t quite yet a city. A fine line between rural and urban, traditional townhouses and large, generous yards made up the town.

Under the rule of Carol the First, the first king of Romania (1839-1914), the capital began to adopt elements of western architecture, with large boulevards and important public institutions being built: Bulevardul Kiseleff (Kiseleff Boulevard), Bulevardul Aviatorilor (Aviatorilor Boulevard) and today’s Piata Revolutiei (then – Piața Palatului (The Royal Palace Square). This led to Bucharest being famously nicknamed “Little Paris” or “Paris of the East.”

The city continued to develop throughout the interwar period, keeping up with Western trends and adopting modern architectural styles. During this time, Bucharest truly confirmed its status as a European capital, being at its architectural peak.

“The mess in Bucharest started in the later periods of Ceaușescu’s rule,” Marin points out.

Once the communist era settled in, Ceaușescu halted many projects and began building large residential neighborhoods, made up of sets of apartment blocks, which are still seen throughout the city. Their repetitive, rigid architecture led to the start of Bucharest’s modernization, straying far from its once elegant, sophisticated style similar to that of Paris.

As the communist regime fell and the revolution of 1989 began, the city experienced times of great uncertainty, with buildings being shot, burned down and vandalized. This meant that a lot of the architectural heritage was damaged or even destroyed. Bucharest was left with a clean slate, wiped of the architecture that had developed along the last century.

What does the future have in store?

Bucharest is experiencing one of its greatest moments of transition, moving away from its authoritarian past and letting go of its remains. The city’s architecture perfectly reflects this time of change: a blend of old and new, tragically decaying and perfectly polished.

As Romania gives way to a modern era in its history, some hope its capital will keep up with modern trends—while others cling to the past. How will the future generations of architects rise to the challenge of holding on to the past just enough, while stepping into the future?

“The academic world is broken off from reality and everything is on a philosophical, theoretical level, sometimes excessively.”

When asked what kind of architects he wants his students to become, Marin hopes they will stay creative and inspired, despite the bureaucratic, economic, and political hurdles they’re often met with after graduation.

He hopes they will find a balance between modern design and the preservation of Bucharest’s beauty. Because only when we embrace the past, do doors to a more hopeful, brighter future open.

The interviews were conducted in Romanian and translated, with the permission to English, with permission.

A Less-Talked-About Consequence of Covid: An Alarming Increase in Eating Disorders Among Teens