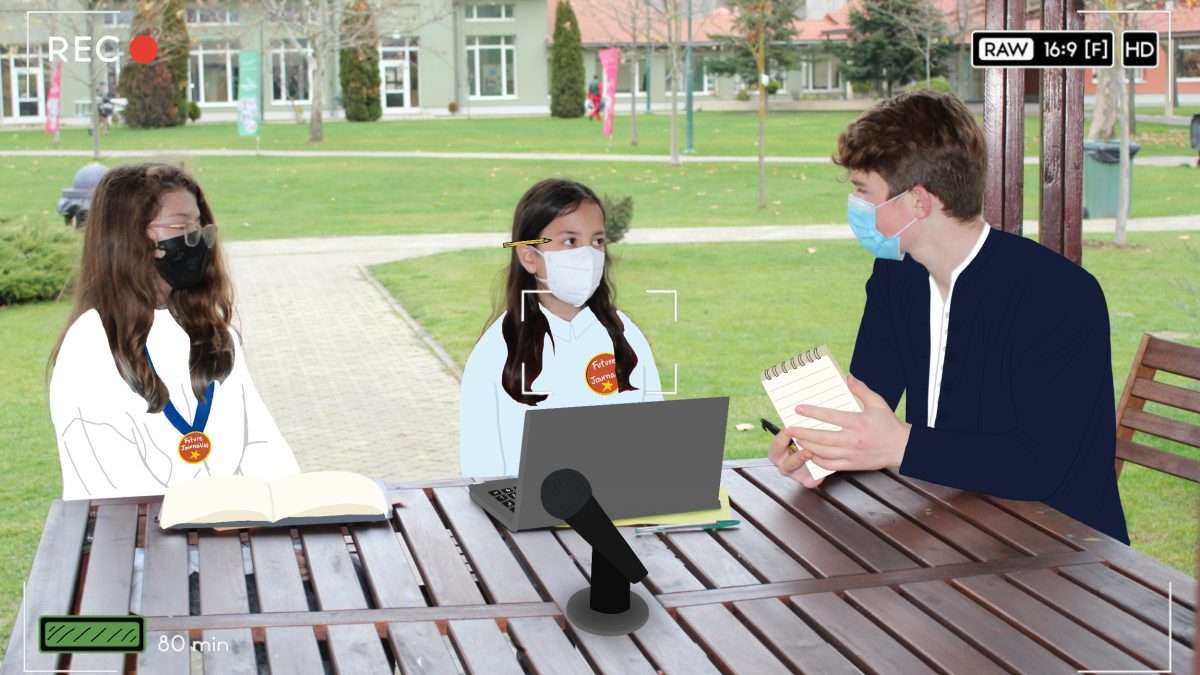 AISB’s prospering journalism program is the result of Jennifer Stevens’ arrival to AISB in 2017, wherein she started the school’s widely known high school newspaper, The Bite.

Over the last four-and-a-half years, the once elective class for 9th and 10th graders has become a publishing opportunity for DP students, as well as the occasional middle school student. And now, for the first time, 5th graders.

In October 2021, Stevens received a request from several grade 5 teachers to help expand journalism throughout the AISB community. “They were introducing a media unit and asked if I could present to the students,” she explains. “I was really excited to talk to the kids and get them excited about journalism. It makes me wish [AISB] could have elementary, middle, and high school programs.”

Stevens shares that at the end of the lesson, the students had time to brainstorm topics they thought needed to be addressed in their grade level. And in a matter of minutes, the words “bullying,” “climate change,” “poverty,” “vaccines,” “racism” and “gender equality” filled the Zoom chat. It was clear that these 5th graders were passionate—and felt that a lot of changes needed to be made.

The students went on to create media campaigns in hopes of getting published on The Bite. And in the end, two students were nominated: Kiana and Fulya, who both tackled the topic of sexism.

Kiana chose to write about sexism and gender division in her 5th grade class. She includes explanations of what sexism is, provides quotes, and information from a fellow classmate, and states her opinion: why there is no room for sexism in this world.

Kiana explains that first-hand experiences with sexism motivated her to launch this media campaign. “I have noticed [sexism] happen a couple of times in my grade, and I really do not like it,” she says. “I really do not like how it defines people, and makes them insecure about themselves.”

An example of events that Kiana believes defines people is sports, such as soccer, and the interactions that take place between boys and girls. In her article, Kiana recalls a clear separation between girls and boys during soccer games in multiple countries that she has lived in, constantly being excluded, and treated differently simply because of her gender.

“I just want us to be friends, but I feel like there is something pulling us apart, a division,” Kiana claims.

Fulya’s Campaign: How Sexism Affects Everyone

Fulya focused on writing her article with a wider lens, mentioning how sexism affects both men and women all over the world. Not only that, but Fulya’s article proceeds to educate readers on what sexism and feminism are exactly, and how all humans can take action.

Fulya mentions in her article that only 10% of sportswomen who have experienced sexism throughout their careers felt comfortable reporting it. She hopes that, by talking about it more openly, we can prevent this trend from continuing.

“Sexism can happen to anyone, and it affects many people,” says Fulya. “I want to teach people about it, and how to stop it.”

These two writers produced two incredible pieces of work for their media campaigns, and prove that you’re never too young to share important opinions. This is, after all, how we enact change.