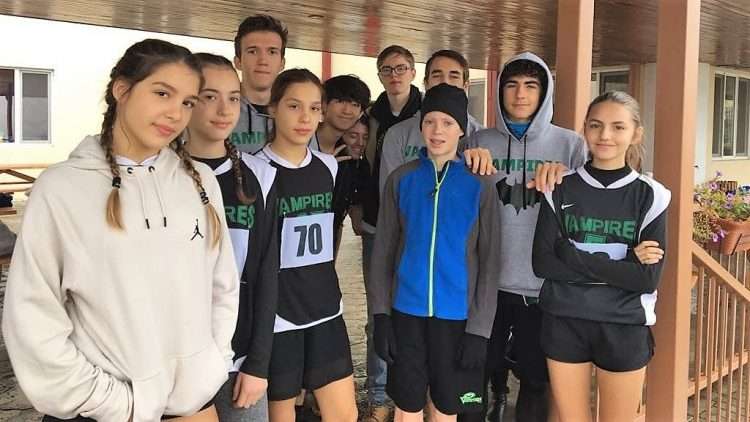 While high school girls’ CEESA soccer tournament took place in Bucharest, the cross country team traveled to Tbilisi, Georgia, a country full of alluring mountains and nature. There were 12 agile runners: Oliver, Ilinca, Selin, Defne, Sandra, Raquel, Noel, Leif, Razvan, Reijer,  Mitchell, and Joseph. The six schools we competed against were Istanbul, Almaty, Beirut, Saint Petersburg, Yerevan, and Tashkent. For most, it was probably the most stressful 5 and 3 kilometers they had ever run in their lives.

The first day was very rainy and the ground was incredibly muddy, so that even when someone walked, they slipped! The race was held on hills, but racers could not see anything because the fog was so thick.

Before the race, everyone walked the trail. When walking, the participants’ shoes became very heavy because huge pieces of mud became stuck under their sneakers, making the running conditions much more difficult. The weather was unexpected and the Vampires had never trained in such conditions like these muddy grounds and hills. The race at this point was very dangerous because it felt like walking on ice. Competitors were frustrated because they ran on hills, making it easier to slip.

Although it was difficult, the Vampires had two runners make the podium. Coming in first place was Ilinca (grade 9), and third place was Selin (grade 9). Ilinca Palea impressed everyone with her finishing time .

“During the race, the hardest part was the mental struggle of trying not to quit. However, when you finish the race it is so relieving and you feel so proud of yourself, ” Ilinca says.

Fortunately, the second day had marvelous weather and the mud had partially dried. For the three kilometer race, the high school girls did an impressive job and the same two runners placed in the top three. The race was extremely intense because 10 seconds could have changed the Vampires victory since the other teams were running very close behind.

Everyone was extremely tired at the end of the day but pleased with the scores. However, the races were not over. An unexpected surprise was the coach’s race. It was a way of seeking revenge on the teachers since only the students ran. At first, the Vampire coaches, Mr. Scholtes and Mr. Kavun, did not want to run, using the excuse that they would lose. However, after many minutes of trying to persuade them, they gave in and went to the starting line. The student runners separated, each waiting in a place that they could cheer for the coaches. Then after the 3k, the whole team saw the Vampires cross country coach, Mr. Kavun, in first place. He sprinted to the finish line, and astonishingly, Mr. Scholtes came in third place!

When asked about the weekend, Scholtes commented that, “There were so many highlights from this year’s CEESA event. An obvious one is the overall results, particularly for the girls, but it was also really fun to explore a little bit of Georgia.”

In addition he said, “It was just fantastic to see the group come together as a team. At training we were all focused on improving our technique and times, but the competition really brought out a sense of camaraderie among the runners. Obvious lowlights were the difficult conditions (I still haven’t got my running shoes completely clean), and the six hour stopover in Istanbul. But overall, It was a really great trip!”

Even though (individually) none of the boys placed in the top three, they ran their best and earned an overall third place trophy and girls won overall first place. Trophies were won based on a point system of all the racers’ times.

At the end of the day, what really mattered was having a great time, which the team definitely accomplished.

Staying in Bucharest Over Winter Break? We've Got You Covered.