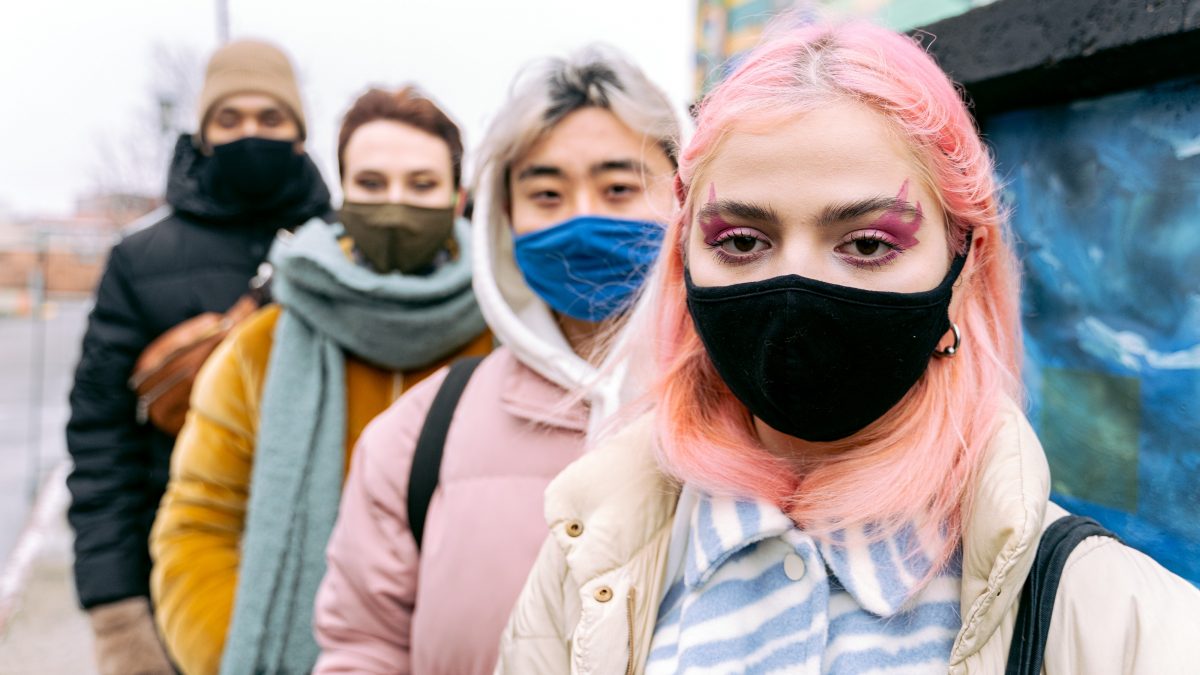 Photograph by Photo by Antoni Shkraba, distributed by Pexels.com.

Last March, when we first moved to distance learning, none of us would have dreamed we’d still be learning over Zoom come August. But here we are.

The pandemic has prevented us from seeing friends and family; many of us weren’t able to travel this summer; and people all around the world are suffering–both financially and emotionally. It’s hard at times to be positive, or imagine when things will return to normal, but it’s important to remember that humans have experienced this before (albeit without Zoom and the 24-hour news cycle, but still).

Here are 5 pandemics that came before COVID-19:

The H1N1 virus was first detected in people in the US in 2009, after being found in pigs in 1998. During the first 12 months of the pandemic, it’s estimated that 0.001-0.007 of the world’s population died due to its effects, and in total the virus claimed between 151,700 and 575,400. Its symptoms developed one to three days after infection, and the patients would suffer from fever (but not always), chills, cough, sore throat, runny or stuffy nose, watery, red eyes, body aches, headache, fatigue, diarrhea, nausea and vomiting.

“(The) virus resulted from re-assortment, a process through which two or more influenza viruses can swap genetic information by infecting a single human or animal host” —CDC.

The virus mainly targeted younger people, as few had any pre-existing immunity to the novel influenza A virus. The CDC stated that nearly one third of people over 60 years old had antibodies against this virus, likely from exposure to an older H1N1 virus earlier in their lives.

Measures such as informing the public and recommending certain precautions (avoiding crowded spaces or carrying hand sanitizer) were taken, and US President Barack Obama asked congress for $1.5 billion in emergency funds to fight the disease. However, a vaccine was not available in large quantities until late November—after the peak of illness during the second wave had come and gone in the United States.

The pandemic occurred right after the Great Recession of 2007-2008, which, according to AISB English Teacher Ian Edwards, meant that the virus didn’t visibly affect the U.S. economy since it was already suffering. Nevertheless, both the fear of the flu and the disease itself was responsible for an economic toll in the form of cancelled events, a reduction in tourism, and a drop in the pork industry, “despite assurances from public health agencies that the flu isn’t spread by eating meat.”

The Russian Flu first appeared in St. Petersburg, Russia in 1889 and soon spread throughout Europe and eventually the world, claiming ~1 million deaths within four waves, which got increasingly deadlier. The patients experienced symptoms like hot and cold flashes, body aches, fever and weakness, followed by sore throat, laryngitis and bronchitis. What made the disease harder to diagnose was the fact that at the time symptoms like fever or cough were classified as “the nervous, neuralgic, or rheumatoid type,” as they were associated with mental conditions like nervousness or anxiety.

“Overall, the patients were about as sick as persons with a bad cold,” ⁠—reported by History.

The virus spread quickly, and “tracing its path, scientists would observe that it tended to follow the major roads, rivers and, most notably, railway lines—many of which hadn’t existed during the last major pandemic in the 1840s”, states history.com. Most medics advised staying away from those already sick, and some even advised against using the postal system, which indicates the limited knowledge of how the virus could spread beyond immediate human contact.

Where actually treating the disease was concerned, the best that the doctors could do at that time was offer treatment for the individual symptoms, as there was no recognized cure for the flu, and it was also closely related and often mistaken for other diseases such as phthisis, acute bronchitis, chronic bronchitis, pleurisy, and pneumonia.

In Europe, doctors were confronted by patients with symptoms immediately, and the rapid spread of the disease presented scientists with new challenges regarding medicine and treatments. “The 1889 influenza epidemic was not only the first epidemic in the era of bacteriology, but also one of the first so widely commented on in the daily press,” reports the National Center for Biotechnology Information.

The first cases of H2N2, a strain suspected by some to have originated from a mutation in wild ducks combined with already existing human genes, was discovered in the Guizhou Province of southwestern China in February 1957. It is said to have caused 2 million deaths worldwide, an estimate given by WHO, with a mortality rate of 0.6%.

The Asian Flu would cause symptoms usually associated with the influenza viruses: a dry cough, sore throat, difficulty breathing, a high fever, body aches and chills. It was found that the only people who had antibodies to this virus were part of the survivors of the 1889 and 1890 Russian Flu and in their 80s and 90s; despite this, the elderly seemed to be particularly vulnerable.

During this pandemic, news of the disease traveled fast from Europe to America, and doctor Maurice Hilleman quickly got to work and pushed for the development of a vaccine, which was introduced in the fall of 1957. But even with this prompt action, the Journal of Infectious Diseases reports that the virus killed between 70,000 and 116,000 Americans.

The Asian Flu also coincided with the 1957 Recession while the Dow Jones Industrial Average lost 15% of its value in the second half of the year. In Europe, the UK paid £10 million in sickness benefit and some factories and mines had to close, while in Ireland many schools had to shut.

The H3N2 virus emerged in Hong Kong, China, in 1968, and is thought to have come from the same source as the 1957 Asian virus, which supposedly disappeared after 10 years of mutation.

It had a <0.2% fatality and killed around 1 million people. The infection caused upper respiratory symptoms typical of influenza and produced symptoms of chills, fever, and muscle pain and weakness. The symptoms would last 4-5 days or even up to two weeks. It was highly contagious–a factor which led to its rapid spread. Even a whale ended up falling ill because of the virus.

Britannica states that “within two weeks of its emergence in July in Hong Kong, some 500,000 cases of illness had been reported.”

Medical centers were packed, and the best advice doctors could give was for patients to go home and wait out the symptoms. A vaccine was eventually developed, although it became available only after the crisis had receded in many countries. The virus was ultimately beaten by “increased public health communication and treatment” and improved antibiotics.

The Spanish Flu is one of the worst pandemics the world has gone through, having killed an estimated 20 to 50, or even 100 million people worldwide, even though the exact numbers can’t be agreed upon due to a lack of medical record-keeping during the early 20th century.

The disease was first noticed in Spain, during WWI, although modern investigations trace the first case back to Kansas, in the United States.

The virus spread quickly, being carried by the U.S. military, which was very active during the World War. Forty percent of the U.S. Navy became infected, and 36% of the Army.

History details that “troops moving around the world in crowded ships and trains helped to spread the killer virus.”

The virus hit in two waves, the second being more deadly than the first. During the first outbreak, which came at the end of the flu season in spring, the sick experienced typical flu symptoms like chills, fever and fatigue, and usually recovered after several days, while the number of dead was low. However, as the flu season arrived, another wave came and this time the sick were dying within hours or days of developing symptoms, “their skin turning blue and their lungs filling with fluid that caused them to suffocate.”

While Spain was openly reporting on the news, Allied countries and the Central Powers had wartime censors who covered up news of the flu in order to keep morale high, which left many civilians and soldiers alike unaware of the situation. There was also a lack of medical personnel and those who were working, among which students too, often came down with the flu themselves.

Even more, there were no effective vaccines or any kind of antiviral medicine, and doctors, due to the fact that medicine wasn’t as evolved, didn’t know what caused the flu or how to treat it. Thus, they mainly prescribed medicine for individual symptoms; in a lot of cases, this meant large doses of aspirin were to be taken by patients, doses which are now known to be toxic and which led to or sped up deaths, particularly in October.

Other measures included quarantines imposed by officials in some communities, citizens being ordered to wear masks and shutting down public places, including schools, churches and theaters. People were advised to avoid shaking hands and to stay indoors, libraries put a halt on lending books and regulations were passed banning spitting. In some areas, hospitals were overloaded with patients, so schools, private homes and other buildings had to be converted into makeshift hospitals.

As far as the economics were concerned, businesses shut down, including basic services like mail delivery, garbage collection and even local health departments due to so many employees being sick; there was also a shortage of farmers, which led to a shortage of crops. The Spanish Flu also occurred during the First World War, which not only helped its spread, but also increased the economic damage that countries would face.

The moral of these stories: It’s going to be ok

Even though COVID-19 is not an influenza virus like the pandemics listed above, you can see that the symptoms and devastating effects are very similar. And much like these other viruses, scientists will eventually develop a vaccine, economies will recover, and life will return to normal.

Until then, we need to remain patient, grateful for what we have, and confident that this will all be over someday soon.

20 Gift Ideas for Teenagers (from a teenager)