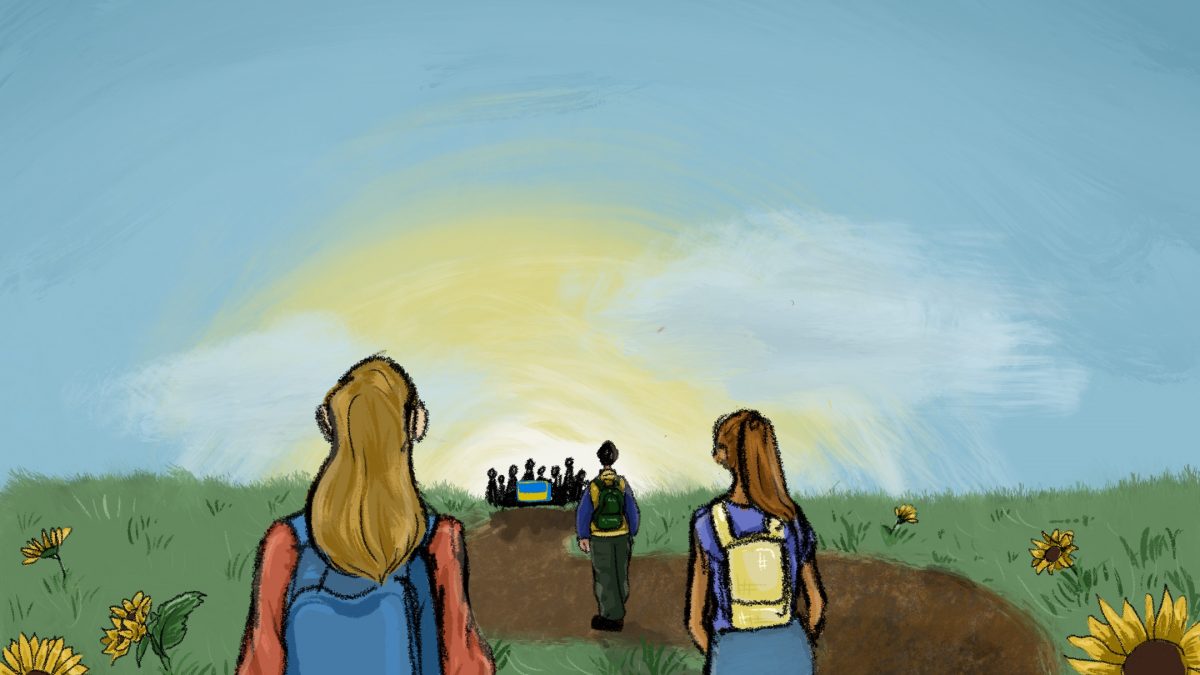 The Russia-Ukraine war started in February 2022 and has affected millions of people in Ukraine and beyond – including several students and families at our school. Additionally, the AISB community has welcomed displaced students from across Ukraine during these difficult times.

Many of these students are continuing to confront short and long term challenges in addition to the war itself.

Katya is a 12th Grader that transferred from Pechersk School International Kyiv (PSI) to AISB this April. We asked her how she’s adjusting to her new community and how she feels about the current situation.

Katya started off by sharing that she was told in advance that she would be moving. She was able to say goodbye to friends in Kyiv before leaving for England, her family’s first destination. Even so, “It was a shock,” expressed Katya.

After living in England for 3 months, moving to Romania came up as a long-term option. Katya said that it was a big mess: only two weeks to arrange airbnbs, visas, complex logistics and more.

It’s been tricky to live out of a suitcase.

Katya transferred into the middle of the Diploma Programme when she arrived in April, which was not easy at all for her.

She mentioned how challenging it was to get caught up with all her subjects, “I am still not caught up technically, I still have problems with IA’s that I haven’t done. I definitely think that I integrated well in terms of the community, but in terms of stress levels it hasn’t been pleasant.”

After finally settling in and building a stable routine, Katya and her family recieved a message from their landlord in Kyiv: they had until the end of September to pack the belongings they left and officially move out of their apartment.

Being close to Ukraine gives Katya a feeling of comfort though, “If the war were to end tomorrow, I would try to go back to Kyiv and visit different places. I didn’t feel in danger [in Kyiv], I felt safe” says Katya. Even though Ukraine borders Romania, Katya describes feeling close, yet so far from home.

As a known Ukrainian refugee, Katya feels all eyes turn to her when the war is discussed; this makes her feel as though she has a responsibility to represent her country in all conversations. Katya feels like representing Ukraine is important and necessary in order to spread awareness. Although it is not a duty, it is something that she chooses to do.

Stress is surrounding her family but they try to manage it together through daily family discussions. “This was something I never wanted… but I still went through it, and that will definitely affect me later on” she says, “This event has changed my view on [other] events and the world.”

Viktoriya attended AISB a few years ago and returned this March from Kyiv International School (KIS) as an 11th grader. Soon she will be graduating with the Class of 2023 and will hopefully be able to go home and visit her family by the end of this year.

However, the challenges that she’s faced due to the war have followed her and have made it very difficult for her to focus. Viktoryia’s thoughts are always revolving around her family and friends she left behind.

I felt the constant need to check the news to make sure I didn’t miss anything since I was so anxious and paranoid about home.

This situation has significantly impacted Viktoriya’s learning. She’s found herself becoming distracted from her studies and deeply worried about what she sees on the news.

In addition, Viktoryia is struggling with the focus and time management that succeeding in the IB requires, especially since she’s had to adjust to the different delivery of classes, catch up on work, and study for the IB exams that she is still expected to write.

Unfortunately, many Ukrainians who have moved to our school have had challenges beyond schoolwork. With the war continuing and new laws being put into place in both Ukraine and Romania, Viktoriya has not been able to visit her family or go back to her home. “I have not gone back home since February 27. It was definitely unusual since every summer, no matter where in the world I lived at the time, I would go to my hometown to reunite with my family and friends – and this summer it was different.”

Viktoriya mentioned that she now has constant paranoia wherever she goes. She shared, “When my mom, brother and I finally went outside to go on a walk, we heard church bells. In smaller towns and villages, church bells were used as sirens for people. I remember I froze and looked at my mom; it took us a minute to get back into our senses and remember we are not home anymore and we are safe.”

The adjustment for her and her family has been difficult. The impact of the war will affect their lives for a long time.

I might have not heard explosions, and the walls in my house weren’t shaking, but I did hear military planes and sirens during the first days of war. I always think to myself ‘other people had it worse’ which is true; they did. I was told I was going through survivor’s guilt. If I’m honest, I didn’t even know that was a real thing until now.

Leith (Leo), a student in 8th grade from our extended AISB family, has also been affected by the war. Leo’s school, PSI, temporarily moved from Kyiv and opened a satellite campus at the American School of Warsaw (ASW) campus. This resulted in 500+ students finding new schools, moving to online learning or relocating.

On January 28th Leo moved to the U.S. due to the political threats and his family’s feeling of insecurity. After that, he moved to Warsaw in order to continue learning. He was welcomed at ASW as one of their community and adapted well to the integrated school system.

The largest change for Leo has been navigating a smaller school community. He mentions that the learning is still the same but the change of people around him has been harder than the academic change. The new community has helped the refugees, giving Leo and his peers a sense of relief.

Although everybody has been welcoming, it’s hard to communicate with them on a personal level because our past years have been very different. It’s hard to make strong connections.

He says he doesn’t have any family remaining in Ukraine, however, Leo is looking forward to going back soon to see his friends. He knows that it has been very challenging for his friends and their families, “In January and February, there was a lot of hesitation to leave and after that, it was hard to get out.” He says, “it is a freeing feeling knowing you can go out and feel safe here.”

A Preview Of AISB's Fall Production: The 39 Steps