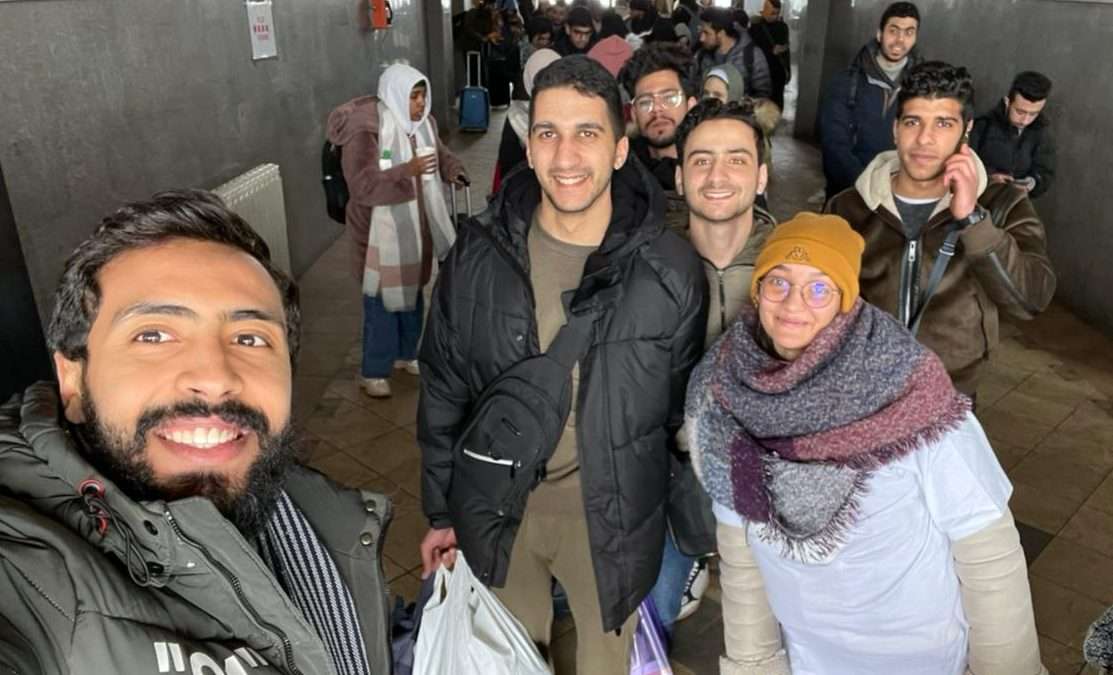 Here, some of the students pose for a picture inside the Suceava train station. Ahmed takes the picture, and many refugees are seen with just one plastic bag of belongings.

Soon after Russia invaded Ukraine, Ahmed Abosnan and 60 other Egyptian medical students heard the first bombs fall in their city of Vinnytsia. They took shelter underground for two days, until they decided to head for the Ukraine-Romania border.

The group split into two buses and arrived at the crossing point six hours later. Ahmed describes the scene as “chaotic,” with long, unorganized queues, people cramming in between cars, desperate to be allowed to the other side.

Crossing the border as a foreigner quickly proved to be a very long process. Ahmed recalls guards letting in roughly 40 Ukrainians, then two foreigners. Tensions were high, with scared students, families, and elderly people jostled together in a sea of chaos. One guard shot his gun in the air for order.

“We knew this would happen,” says Ahmed’s colleague, Muhammad. “Ukrainians first, then everyone else.” Ahmed adds that it’s normal for Ukrainians to want to help Ukrainians first, but says “how they did it is not good.” The students recall their friends being pushed out of the way by guards, allowing for Ukrainians to pass. Ahmed explains that the guards told him something that translates to “This is what was meant to happen.”

It took six hours for all of the students to cross, but they made it. And once in Romania, they were welcomed by large groups of volunteers, offering food and shelter.

“It was minutes between being in Ukraine and Romania, but it was a [completely] different place,” says Ahmed.

From there, they were escorted to the Suceava train station, where they traveled to Bucharest. Upon arrival in Gara de Nord, a group of local volunteers greeted them—among them, a man named Sergiu Condac, who Ahmed refers to as “Mr. Sergiu.”

Ahmed and his colleagues were “overwhelmed” with the kindness of Mr. Sergiu and his friends, who were so eager to help them find transportation and accomodation. It was jarring for Ahmed to see the juxtaposition of what was happening in Ukraine to the “heart-touching” ways Romanians were stepping up to help. “We were wondering, why are the Romanians so nice? It was like a competition to help us,” Ahmed jokes. “It’s the first time to see such a thing.”

The volunteers are just some of more than 260,000 members of the Facebook group “UNIȚI PENTRU UCRAINA,” or “United for Ukraine,” where civilians have gathered to volunteer and donate to help refugees coming in from Ukraine. At present, there are almost 1,000 #solved posts in the discussion—one of which includes the safe arrival of Ahmed and his friends to Cairo.

The 60 medical students are now in Egypt, and Ahmed says they’re all grateful to be safe, but are now worried about the future. They left everything behind, including their university and possibly their education.

“Til now we are lost,” says Ahmed.

Ahmed had been studying general medicine in Ukraine for the past six years. He was in his last semester of school, one exam away from receiving his medical degree. This was the case for many of the 60 Egyptian students who studied in Vinnytsia.

As a non-EU country, Ukraine was a popular destination for foreign university students wanting to study in the European region. In fact, BBC reported that Ukraine was home to more than 76,000 foreign students, according to government data from 2020. Many of these students are from Northern Africa, like Ahmed and his friends, and are having to return to countries that don’t have university programs for them to continue their studies.

Ahmed says that their university in particular confirmed a break from learning until the 15th of March, when further information would be provided about the uncertain future. But with that date approaching, and the situation in Ukraine worsening, things are uncertain.

“I feel safe about our life but not about the future,” says Muhammad.

So for now, they wait, and they watch the news. They hope for peace—and for the chance to finish their degrees and move on to the next chapter.

When asked what he wanted us to include in this article, Ahmed said he only has words of gratitude and wanted to thank the Romanian people for giving refugees a chance and making them feel safe.

“Keep up the great work. You are heroes and you should be proud of yourselves. Romanians are always welcome in Egypt. I will be waiting for all of you.”

The Bite is Hiring