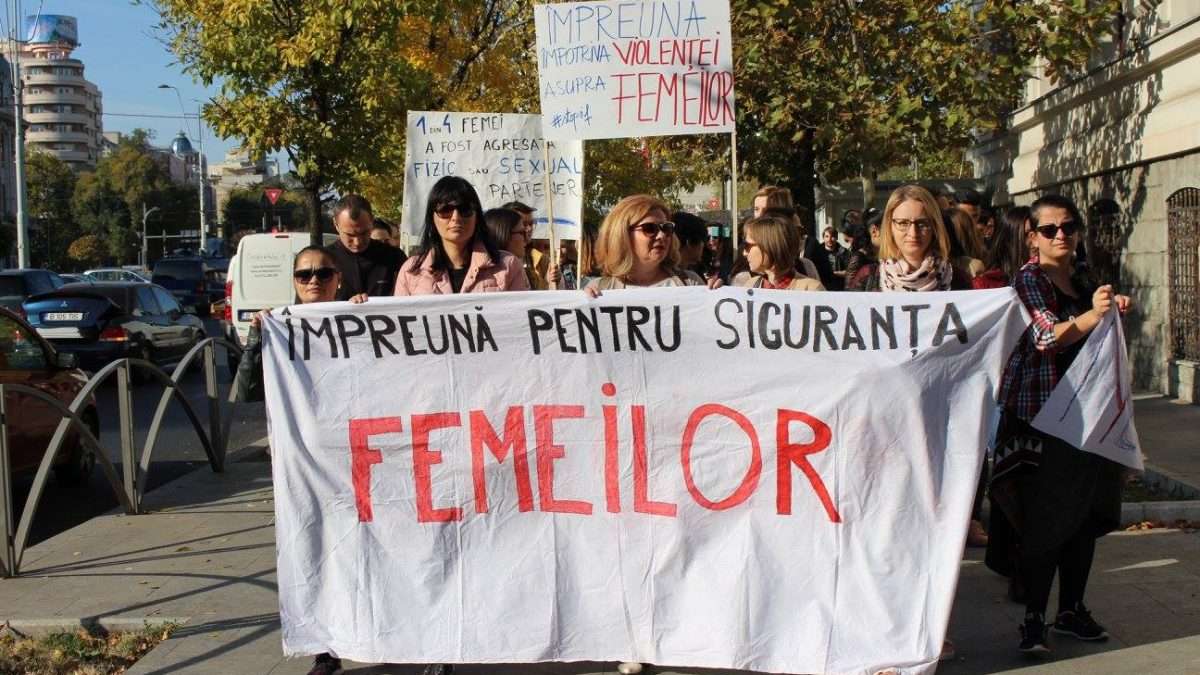 Local FILIA members march with signs that say "Together for Women's Safety."

Their first initiative was to get a better idea of Romania’s relationship with sexual harassment, so they interviewed a large sample of women, both inside and outside the school community. According to group members, the responses were “overwhelming,” and ranged from regular encounters with cat-calling and suggestive comments, to instances of being followed, and undesired sexual advances.

“The discourse [we] found [ourselves] involved with made us wish that there was a better understanding of sexual harassment,” says Anna K. “And that our community could hold a more feminist and less ‘victim-blaming’ standard.”

A FILIA employee who works with the school’s service members suggested that, while this is a global issue, addressing it on a smaller scale could be very effective. “She [had done] something similar in her university years and found that it allowed victims to feel more protected, but also allow bystanders to educate themselves,” Anna explains.

The group reached out to AISB’s Safeguarding & Support Services Coordinator Jillian Nichols to see what the school had in place to prevent sexual harassment and to protect victims. “There [had] been a child protection policy in place…[but] it did not explicitly address sexual harassment per se,” says Nichols. She assumes that it’s “because there was no one specific member of leadership responsible for overseeing and initiating a comprehensive safeguarding program.”

This is Nichols’ second year at the school, and she was hired specifically for this new position— created to develop and incorporate more concrete programs to keep students safe (related to not only harassment, but bullying, peer-on-peer abuse, etc.). She has “wholeheartedly support[ed] the initiative by these students to raise awareness about the important issue of sexual harassment within our school community” and looks forward to working with the FILIA group to determine the next steps.

“Having experienced both sexual harassment and societal ignorance/victim blaming myself, we know the document is a valuable resource,” says Stefana.

“So much happens due to ignorance… people don’t understand their suggestive comments or cat-calling is sexual harassment. Behaviors are never corrected, and the cycle continues.”

The women in this group hope that this is just one step in breaking this cycle, and building a safer, healthier school environment. They also hope it will start important conversations, in a country that lacks representative data on the prevalence of sexual harassment within Romania’s educational institutions.

“A school educates and prepares students for life,” Stefana explains. “If mathematics and literature are considered essential for our ability to function as productive members of society, so should ensuring that we do not enter adulthood holding prejudices about what constitutes sexual harassment and appropriate behavior.”

To view the handbook, click here. *Note that this is a drafted proposal and is currently being reviewed by school administration.

FILIA (the Romanian-based NGO outside of school) provides anonymous help for those that have been sexually harassed, or have been witness to sexual harassment. They can be contacted by email at office@centrulfilia.ro or by phone at 0213 138 024.

All AISB community members are encouraged to report any incidents of sexual harassment and gender based discrimination directly to the Student Safeguarding & Support Services Coordinator, Jillian Nichols, who can be contacted at her email address jnichols@goaisb.ro, or at 0744 993 553.

If you’re interested in getting involved with AISB’s local chapter of FILIA, contact the group’s advisor, Ms. Carolina Escobar at cescobar@goaisb.ro.

How to Celebrate this Year's Harvest Festival at Home: Recipes from AISB's 8.4B Class