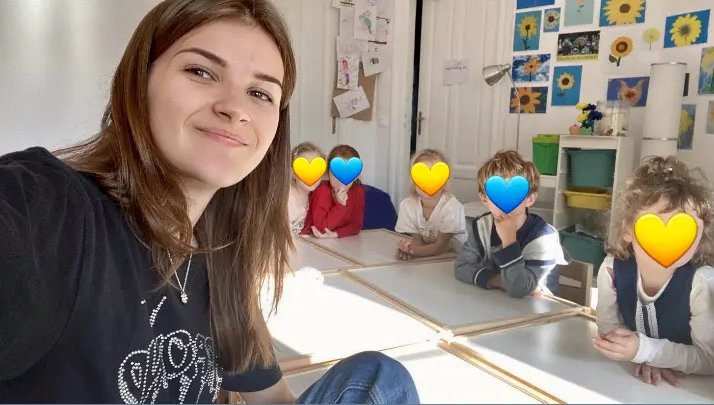 The war between Russia and Ukraine has been one of the most broadcasted topics for the past three months. From unjustified bombings and killings to a growing refugee crisis, there has been a horrible amount of suffering for the people living in Ukraine.

One of the many Ukrainians who fled their homes is current AISB student Viktoriya R: A 17-year-old originally from Kyiv. She had been studying at the Kyiv International School (KIS), a CEESA school following the IB Program, but transferred to AISB at the beginning of March.

She says that after the first bombs were dropped on February 24th, Viktoriya and her family, along with classmates, frantically began looking for safety—and for many, new homes. She said that none of them really expected this to happen.

“No one took the situation seriously until the [U.S.] Embassy announced what could happen,” says Viktoriya.

Everything escalated quickly, and pretty soon after the invasion started, students were spread across most of the world, learning online and in-person, at nearby CEESA schools. Since Viktoriya attended AISB two years ago as a freshman, she re-enrolled, and moved back to Bucharest with her family.

Some of her peers, however, were not as lucky. While her school moved to online learning in late February, many of her Ukrainian peers simply could not study. “Teenagers from Ukraine were constantly thinking about their safety and whether or not the situation would come to an end sooner,” says Viktoriya.

Besides being caught up in the middle of a war, DP students were still expected to prepare for the IB exams. As one of Viktoriya’s friends told her, feeling that pressure after missing an entire month of school after the invasion was too much. “Russians were bombing military bases right next to our houses,” they explained.

“School was similar to the distance learning situation due to Covid-19 Pandemic, Viktoriya says, “only that the stress levels were radically increased as people could only think about the war.”

The one upside, at least for Viktoriya and a large handful of colleagues, is that the CEESA schools had rallied together and waived tuition costs for students transferring from Ukraine. This action has permitted families to move to other countries and flee Ukraine without the added stress of paying for school.

Viktoriya was happy to be able to return to a familiar place, and recalls the transition period while she was still on Zoom. “While in KIS, I joined classes, but the tutors were unable to teach as they were set up in underground bunkers,” she says. In fact, she remembers a teacher saying over Zoom, “If I randomly go under the table to hide, know that something is happening.”

After a week of waking up every morning to sirens and news about explosions in nearby cities, Viktoriya claims that “for five days, I could barely eat due to the stress and slept 10 hours in total.”

For Viktoriya and many of her peers, they also were focused on the fact that they were forced to leave their older relatives behind, without knowing if they would reconnect again.

“Even though I was super upset to leave them (grandparents, relatives) in Ukraine, at this point it was more about being safe rather than feelings,” says Viktoriya.

Viktoriya’s grandparents and close friends are still in Ukraine; and while things remain heavy, she’s been able to reintegrate into AISB and focus on her studies and helping others—a welcomed distraction.

What the future holds

It’s hard to predict when the war will finally come to an end; and because of this, displaced Ukrainians can’t make plans or think too far ahead into the future.

For Viktoriya, it makes sense to spend the rest of the school year at AISB for her wellbeing. And since she’s a DP student, her family signed a contract for Viktoriya to continue at AISB through graduation, as they know finishing the DP in one school is the best option for her to be stable and overcome the situation.

“My family plans day-to-day,” explains Viktoriya. “But even if the situation gets better, going back to Kyiv would be really hard due to the destruction…”

Right now, despite having her home isolated from the Kyiv explosions, Viktoriya is concerned about how the main towns will end up looking when she eventually returns to Ukraine.

There is also a high possibility, according to Viktoriya’s teachers, that KIS won’t be open next school year—hence employees are looking for new schools where they can teach, and students for other countries where they can study. On the other hand, there are also many who don’t have the opportunities or funds to leave Ukraine.

For Viktoriya, she feels a sense of “survivor’s guilt,” as she was able to get out of the country and move to a familiar school. She feels safe in Romania, but know many of her friends and family are not.

So she’s been putting her energy into helping other Ukrainians who have crossed the border into Romania. She uses her language skills to volunteer at shelters around Bucharest, and is currently focused on supporting AISB Teacher Andrey Kavun’s efforts at an after-school program he created downtown. She goes every Monday and Wednesday to play and teach the Ukrainian children.

Viktoriya claims that she tries her best to distract the children (and herself) at the center from what’s happening, as “these kids have no fault and shouldn’t know at such an early age that Russians invaded their home-country.”