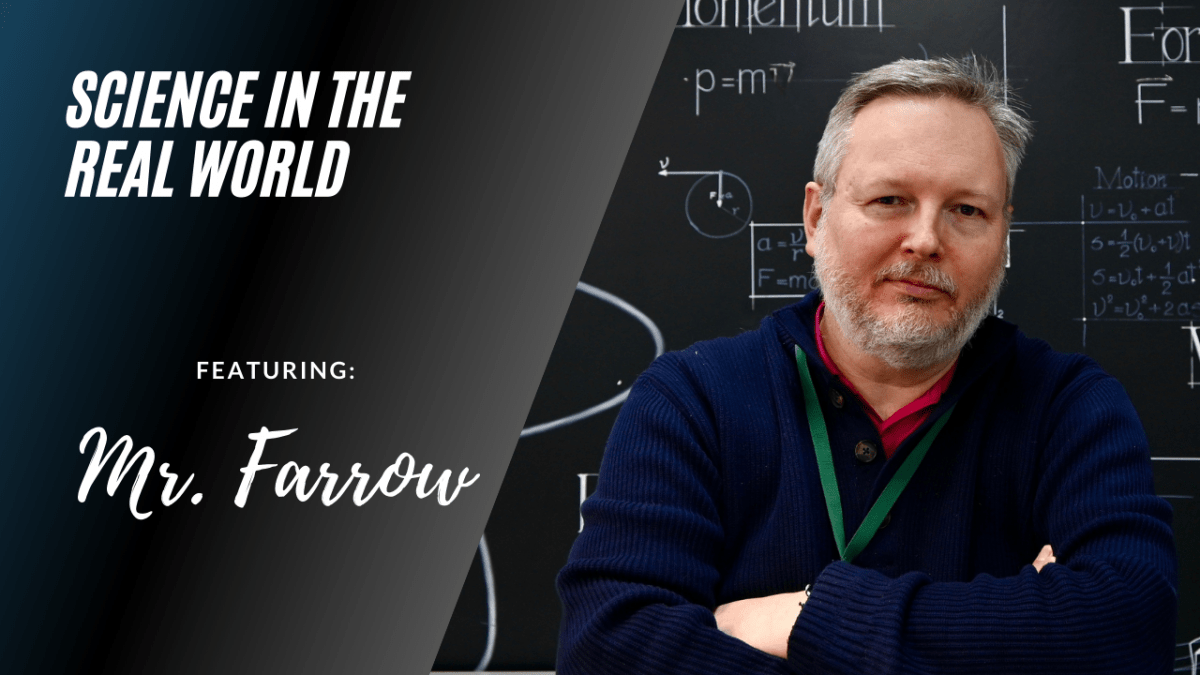 It’s easy to forget that there’s more (or less!) to science than what we learn in school. To see what it’s like to actually work as a scientist, I’ve been interviewing several of AISB’s science teachers.

Continuing on from Mr. Scholtes, Mr. Byron Farrow, a physics teacher with over twenty-five years of experience, details what it was like getting an honors degree in astrophysics.

He was one of 150 people enrolled in his program, which set some of his peers up for prestigious jobs at companies like Rolls-Royce, IBM, and various research companies. For Mr. Farrow, the degree gave him the knowledge and practical experience needed to be able to teach advanced concepts for the DP (along with a better understanding of the world).

Stellar Spectroscopy: One Of Mr. Farrow’s Many Investigations

During his three years studying astrophysics, Mr. Farrow participated in several types of investigations, one of the most notable being one on stellar spectroscopy.

As Mr. Farrow explains, stellar spectroscopy is “when you split the light from a star into [a spectrum of] its component parts, kind of like a raindrop splitting the sun’s light into a rainbow.”

More specifically, stellar spectroscopy separates starlight of mixed wavelengths into multiple light rays with the same wavelengths—wavelengths, in this case, being the distance between two peaks of a wave, as shown in the diagram below.

Using the example of a rainbow, “the raindrop splits [sunlight] into shorter wavelength blue light and longer wavelength red light… except in spectroscopy, we use a diffraction grating… not a raindrop.”

Because different elements in stars emit light of different wavelengths, and each star has slightly different proportions of elements in them, looking at the component wavelengths of light from stars allows us to determine the chemical composition and temperature of their outer layers, among other things. When combined with other metrics, stellar spectroscopy can also shed light on the life cycle of stars in general and even the formation of planets like ours as a secondary or tertiary application.

For Mr. Farrow, performing stellar spectroscopy meant spending several hours most nights of the week pointing the Lickey Hills Observatory university telescope at the sky, located several kilometers away from campus. He’d record the wavelengths of light received, with the ultimate goal (besides learning) being to add to the ever-growing pool of star data.

The Challenges of Processing Data

Beyond physical use and calibration of the telescope, Mr. Farrow also spent time processing the data collected by the telescope. While the data consisted primarily of the different wavelengths emanating from the stars, other parameters, such as the distance of stars from earth, were also used in processing, as these could have affected how the light was received.

While this part of the assignment was taxing, Mr. Farrow says it’s what came next that was the most complicated.

The software Mr. Farrow used, Fortran, vaguely resembled modern programming languages like Python and C++, but, being much older, it was clunky and hard to navigate, particularly for Mr. Farrow, whose main passion was the physics aspect of the investigation.

In addition to this data, Mr. Farrow was was also responsible for looking at the effects magnetic fields had on the spectroscopic profile of stars. Stars produce magnetic fields in something of a different way than magnets do; they use aggregations of charged particles like protons and electrons stripped from atoms at extremely high temperatures to create large-scale electric charges.

How might this affect starlight? Even though magnets can’t bend light, a star’s magnetic field can affect how the intact atoms in its outer layers emit light by means of the Zeeman effect, pictured here. Without influence from a magnetic field, the lines marking the different wavelengths of starlight shown in the upper half of the image are thick and clearly defined, but with a magnetic field they become fainter and iterated, with other lines showing up alongside them.

Mr. Farrow was able to identify when the Zeeman effect had occurred by comparing the spectroscopic data to many known cases of the Zeeman effect and seeing how his results matched up. Computer algorithms assisted in determining whether the spectral lines were sufficiently similar to other cases.

But despite the group dynamics, Mr. Farrow loved applying the concepts learned in class to real-world equipment increased his sense of accomplishment.

“To complete a task and to do it well is one of the more satisfying things you can do,” he says. “The more agency you have over that task, then the greater the sense of achievement when it’s done.”

As another assignment, Mr. Farrow dealt with the difficulty of converting some blurry images taken by telescopes, called analogue images, into clearer, pixel-based images.

Mr. Farrow executed this task by dividing the analogue images into boxes using a grid, with each box on the grid being a pixel. Every box was then given a number and/or number representing a color and this number was then stored on a mathematical object called a matrix. Mr. Farrow would then run an algorithm called a deconvolution algorithm on the matrix to make the image less blurry and compatible with pixel-based processing.

In comparison to his spectroscopy task, this one was less important academically; it was “a taste of further research.”

This “taste” actually turned out to be one of the only experiences astrophysics students would have with this type of assignment. As Mr. Farrow explains, technology has advanced so much since he left university that everything he did would be done automatically by computers today, exemplifying the ever-progressing nature of science as new knowledge is gained, all starting from basics taught by people like Mr. Farrow.

The Big Takeaway: Find a Balance between Work and Play

One of Mr. Farrow’s greatest lessons from his program wasn’t necessarily science-based, but one of balance. He says that while he enjoyed the practicalities of his astrophysics courses, university was also a time for fun.

“If you’re not exploring life you’re doing it wrong,” he says.

This attitude comes through in Mr. Farrow’s teaching, and is also a big reason he decided not to continue in academia or research. As he explains, the degree “gave me the necessary background to do a job I enjoy doing, [and] the working conditions and pay are good enough.”

Ultimately, the experiences Mr. Farrow had as an astrophysics student shaped him as a teacher, and the concepts are “embedded” in what he does. He often thinks back to the challenges he had as a student and makes sure to explain things in a way that will give his own students a better understanding of the world—and possibly provide insight into what they want to study themselves.