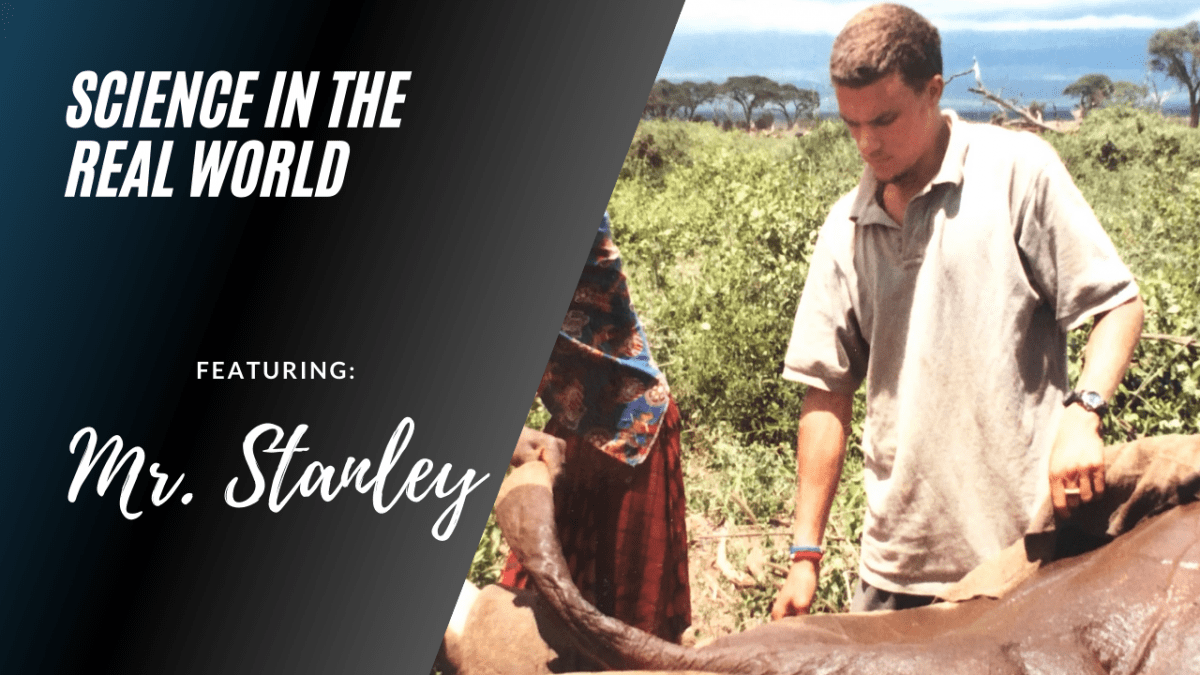 It’s easy to forget that there’s more (or less!) to science than what we learn in school. To see what it’s like to actually work as a scientist, I’ve been interviewing several of AISB’s science teachers (see past articles on Mr. Scholtes here, and Mr. Farrow here).

Pete Stanley teaches a variety of MYP and DP subjects at AISB, including Biology, Environmental Systems and Societies (ESS), TOK, and Photography. And while his passion is evident to current students, Mr. Stanley was not always sure he wanted to be a teacher. In this article, he shares the practical science experience that changed everything.

Mr. Stanley was born in Virginia, but moved to Tanzania after just ten months, where he was raised with an international mindset, and developed a curiosity for African wildlife.

With his father working as a geologist and his mother working with women in development, Mr. Stanley traveled the scope of the country, spending his time studying animals and learning about their behaviors through photography.

Throughout high school, Mr. Stanley became interested in a variety of sciences, and sought to study physics at the University of Colorado Boulder (UCB). He did this for a year, until the program proved “difficult and dull.” At this point, he had a vague interest in biology, so he dabbled in countless prerequisite courses over the next year without ever specializing.

This all changed in 1996, when Mr. Stanley had the opportunity to fly to Tanzania in order to perform an expedition on the local elephant population. Searching for a new kind of experience, he applied for the expedition, and ended up being one of only twenty people accepted. “I had a cultural edge,” he explains. “I spoke Swahili, the others didn’t.”

“Going to Tanzania was like coming home,” Mr. Stanley says.

When Mr. Stanley arrived in Tanzania, everything was as he remembered, including the humidity. “You were almost always sweating,” he says. That first day was hot and long, but also exciting. He and his teammates spent the day meeting locals and learning about what they’d be doing for the next six months: sedating and collaring elephants with large, heavy metal GPS trackers (appropriately named radio collars).

These collars connected to GPS satellites in order to track the elephants’ movements in order to protect them. Mr. Stanley explains that at the time, the poaching of elephants for ivory was even more of a problem than it is now, so this expedition allowed the group to track migration patterns and identify breeding grounds so that authorities could better model the Kenyan-Tanzanian elephant population.

“Only half of the reason I initially went to Tanzania was [this] problem,” Mr. Stanley explains. “The other half was that I thought it would just be really cool to go back to where I grew up.” But as time went on, saving the elephants became the entire groups’ main focus.

It would take more than a relatively small expedition by Mr. Stanley and his team to halt the poaching, though, as it was so rampant that, despite their presence, they found a full elephant carcass with the horns chopped off that they had radio collared just a few days prior. “You could smell the rotting flesh from a distance,” he remembers.

While gruesome, accounts like these are often necessary to incite change. It’s easy to think of poaching as some vague, distant phenomenon, as subtle as it is inalterable.

“After approaching the border of Tanzania and seeing carcasses on trees, elephants with their faces cut off, faceless elephants… I saw the problem. The researchers saw the problem.” —Mr. Stanley

Making a difference in this way is also what connected Mr. Stanley to education. The feeling of making a positive change in the world was something he wanted to share with others. “I wanted to spread that passion forward to the next generation,” he says.

Anti-poaching efforts continue to be impeded because radio collaring and tracking elephants is difficult work. Chemicals similar in potency to carfentanil are used to sedate the elephants, and are handled by drug specialists at all times. The sedating process can also be dangerous for the elephants, because if they don’t fall on their sides they can suffocate to death. Mr. Stanley’s team also had to be cautious of when the elephants were expected to wake up, and ensure they could tolerate the radio collar. “One elephant smashed itself into a tree to dislodge the collar,” Mr. Stanley remembers. “Not all of them could tolerate it”.

At the time Mr. Stanley did his expedition, radio collars could weigh up to 12 kilograms, which, despite being nothing compared to the sometimes 6,000 kilogram weight of the elephants, attaching them was difficult. Even getting a signal was difficult.

Mr. Stanley recalls crouching on top of the truck holding a wooden GPS stick they were using and directing the driver in the direction where the noise coming from the stick would get louder. “Nowadays I think there’s an app on your phone that can do it,” he says.

After the expedition, Mr. Stanley returned to Colorado with a renewed sense of purpose. He knew after his time with the elephants that majoring in ecology was what he was meant to do. By understanding the relationships between humans and their environment, he could then teach others—and hopefully give them the chance to experience something as meaningful as his time in Tanzania.

Since then, Mr. Stanley has returned to Tanzania several times, and many of those times with students. He also became the first teacher at AISB to introduce the Environmental Systems and Societies (ESS) to the Diploma Program.

“I’ve always wished [teachers] would be more encouraged to share these types of passions,” says Mr. Stanley. “This is what motivates students to contribute to things outside the classroom—something bigger.”

Mr. Stanley hopes that by teaching classes like ESS and even photography, that students will find causes they’re passionate about and seek to make change. There are so many things we need to be passionate about, he explains. The number of endangered species is rising; climate change is having detrimental impacts on land and wildlife; elephants are still being illegally hunted for their tusks.

“Some of these issues seem so big and so distant… but the more you join these communities, the more you increase your understanding of how to help,” he says.

As far as how to find the cause that speaks to you, Mr. Stanley has some advice: “If you don’t know, try diving in headfirst. Often that’s what it takes and, even if it doesn’t leave a lasting impression on you, you now know what that entails.”