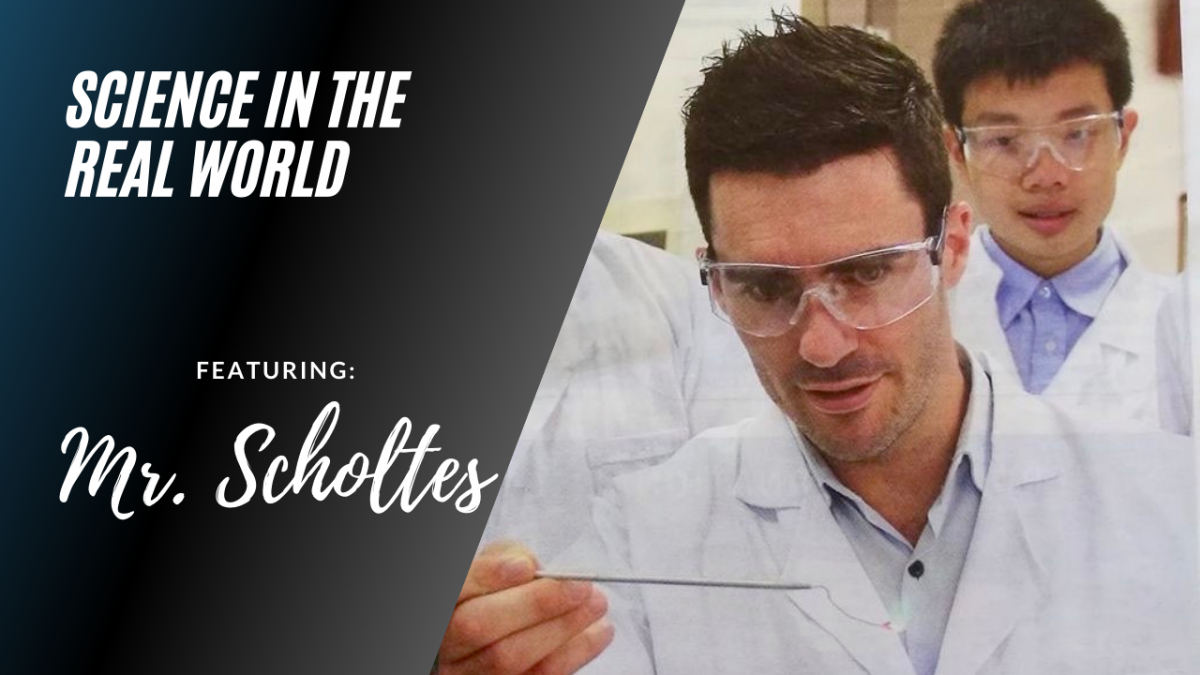 It’s easy to forget that there’s more (or less!) to science than what we learn in school. To see what it’s like to actually work as a scientist, I interviewed several of AISB’s science teachers, the first being Luke Scholtes.

Scholtes’ thirteen-year-long teaching career, during which he taught in Shanghai, China and Melbourne, Australia, is preceded by two science jobs. The first was in a town outside of Melbourne named Werribee at Incitec-Pivot, a company that analyzed soil samples for farmers and agricultural companies.

Scholtes’ analyses, which he performed throughout 2003, informed specialists’ decisions on which fertilizers would bring minerals such as nitrates and phosphates to optimal levels. To conduct these analyses, Scholtes used three machines: an infrared spectrometer to measure organic compounds in the soil, an atomic absorption spectrometer for inorganic compounds, and a combustion analysis machine to measure sulfur levels.

For 7.5 hours a day, Scholtes worked to prep samples in the large lab, which was placed in a field “in the middle of nowhere.” There, surrounded by scales, small plastic bottles full of dirt, and big bottles of chemicals, he explains he was part of a workflow. “I was really just a worker bee,” he says.

Critically, Scholtes had to make sure his analyses were accurate, as using too much of a fertilizer would not only reflect poorly on the company he was working for, but also would lead to an excess of minerals that would be impossible to reduce using fertilizers or other non-destructive means. “Soil pH is fairly easy to control… [but] when it comes to nitrates and phosphates, I’m not aware of any way you can reduce them,” he clarifies. On top of this, excessive use of fertilizers can lead to fertilizer runoff, which damages the environment.

More importantly, though, if fertilizers get into our water supply, they can kill us directly by causing cancer and a potentially lethal disease called blue baby syndrome, in which a baby’s skin can’t get enough oxygen and turns blue.

Despite fertilizers containing chemicals capable of harming humans, plants process these chemicals that would be toxic in that form into safe, often edible compounds. “What’s good for plants is not always what’s good for humans,” Scholtes explains. Furthermore, without fertilizers, we would not be able to sustain such a large population as food production would be drastically reduced, a fact that can be seen visually at ourworldindata.org.

And while this testing is important, it was also monotonous. “I found it very dull… I didn’t have a say over what I did day to day,” Scholtes recalls.

Surrounded by Gold… Well, Not Exactly

Between 2005 and 2008, Scholtes worked at his second science job, which consisted of working at a gold mine for a company called Onsite Lab Services. Here, his task was to figure out how much gold was in an ore: a chunk of mined rock.

Scholtes was at the end of an assembly line, where he had to remove the last layer of impurities in the ore to be able to tell how much gold was in it, with other people before him working in a more stereotypically industrial environment—dealing with much larger rocks and equipment—in order to reduce the original ore down to something that contained a much greater percentage of gold.

There was tonnes of ore that came into the processing plant, but Scholtes explains that more often than not, “You’d be left with a little speck of gold.”

Scholtes does, however, recall one time he was in the presence of more than just a few specks. When the company he was working for was ready to ship out its product, it would send his team a sample for a final purity test that they would send back. One day, Scholtes came upon a leaf-shaped piece of gold sitting in a beaker, having not been sent back.

“There might have been up to 500 grams of gold in there… I weighed it and checked it against the current gold prices, and it was around 2,000 dollars worth of gold,” he recalls.

But most days, Scholtes’ time was spent weighing samples, dissolving them in acid, then processing them with the machines. He explains that the lab was surrounded by rooms containing large furnaces for melting down samples, grinding machines for busting up large rocks, and storage for old samples. “To look at it, you wouldn’t think it was a lab. It was like a big smelting factory,” he says.

Depending on how busy he was, Scholtes would work between 7.5 to 9 hours a day, though there was a two month stint where they needed him to work the furnaces for 12 hours a day with four days on and four off. “That was the worst,” he says. “I never want to work those hours again. The four days off were great but for the [other] four days basically all I did was work.”

Regarding how he got these seemingly unrelated jobs with a degree in medicinal chemistry, Scholtes draws attention to the similar equipment used in both jobs. He says that equipment such as the atomic absorption spectrometer and techniques such as gas chromatography are applicable to a variety of fields, demonstrating the value of his lab education.

Another thing Scholtes’ experiences as a scientist demonstrates is the value of safety. Scholtes’ first experience happened when he was dissolving the ore in acid for his gold mine job. He had to make sure there was the same amount of acid in each graduated cylinder he was using, so he took off his foggy goggles to make sure the amount of acid he was putting in was exactly right. Suddenly, a drop of acid flicked up into his eye, injuring him.

“I was really bummed because I wanted to go see the movie Transformers,” Scholtes jokes, making light of the fact that he had to go to the hospital.

The other story took place when Scholtes had to create a base to neutralize the acid used to dissolve the gold. He did this by putting a powder, sodium hydroxide (a household cleaner commonly known as caustic soda or lye), in water. In doing so, he had to wear a full body suit to prevent chemical burns. When Scholtes asked why this seemingly extreme procedure was necessary, the person supervising the process responded by telling his own story. He told Scholtes how, when he was doing the same thing, he decided not to use the suit, but because of this, unbeknownst to him, some powder got on his arm.

“Now, sodium hydroxide by itself won’t actually hurt you,” Scholtes clarifies, “but when it comes into contact with water, it becomes corrosive, so he didn’t feel anything at first. But since it was hot, he started sweating, and that was enough to trigger it. After he finished telling me the story he rolled up his sleeve and he had all these pock marks on his skin, left from that incident.” The message was clear: safety is crucial.

But aside from matters of safety, Scholtes’ experiences show us the importance of trying new things—because, at the very least, they come with the benefit of knowing what you don’t like.

“If I hadn’t tried those jobs, I wouldn’t have known that teaching was what I truly wanted to do—which for me, has a deeper purpose.”