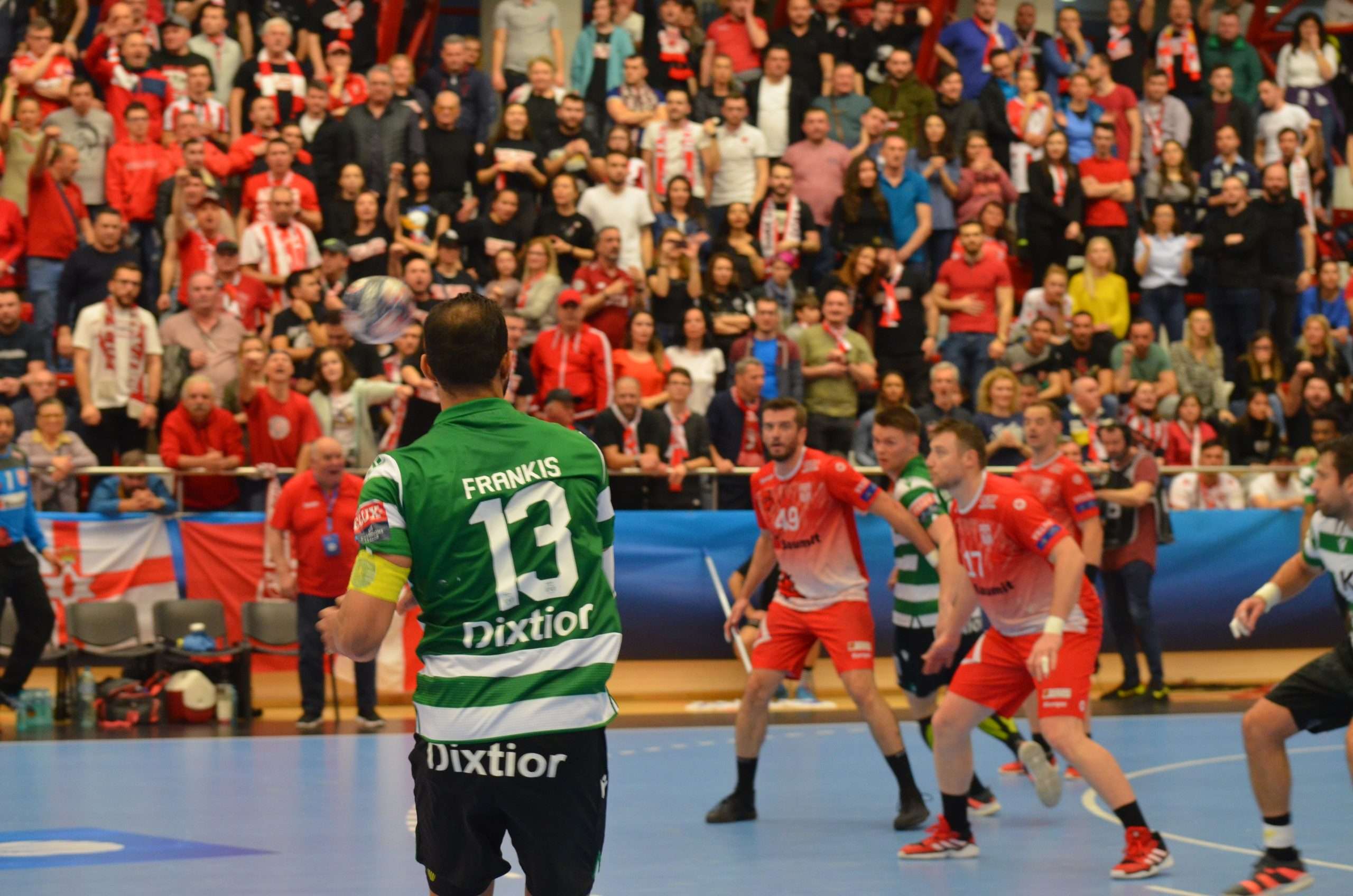 On Sunday, March 1st, Dinamo București faced Portuguese handball team Sporting CP. Since it was a knockout game, both teams fought hard to secure a win. At the end of the nerve-wracking game, Dinamo secured the coveted spot in the final 16.

The history of the game goes back to the last Champions League season, 2018/19. At the knockout stage, Dinamo faced a “heartbreaking” loss against Sporting CP. This year they wanted to take their revenge.

Like always, Dinamo fans were there from minute one. Dressed in red and black jerseys, the gymnasium was filled with loud cheers and singing before the match even begun. Even though some Sporting CP supporters were present, they were overpowered by the loud cheering of Dinamo supporters.

As soon as the Dinamo players entered the sold-out gymnasium, the atmosphere became even more enthusiastic and supportive with many fans waving flags or holding up scarfs. Dinamo București Coach Constantin Stefan described it as a “championship atmosphere.”

The game started off with Dinamo București scoring the first goal. In the 4th and 5th minute, two penalties were awarded to Sporting CP. Luckily for Dinamo București, their goalkeeper Saeid Heidarirad managed to save both.

He proposed the main challenge for Sporting CP, making the score 4:3 after the first 10 minutes. Dinamo was always in front by at least 1 or 2 goals throughout. In minute 14, the Portuguese team managed to have the first tie, after the initial 0:0, now making the score 6:6. Both teams acted with a 6-0 defense.

Through this phase, especially Dinamo’s center-back Kamel Alouini stood out with his great assists to the line player Mohamed Shebib.

Two red cards were awarded during the first half. The first one was for Dinamo’s Ante Kuduz, for a foul on Carlos Ruesga from Sporting CP. Pushing Ruesga down in the middle of an approach, the two German referees gave him a red card. A few minutes later, Luis Frade also got a red card for punching Dinamo’s Alireza Mousavi. Both were lying on the ground trying to get the ball, but as Frade turned his elbow, it came in contact with Mousavi’s face, resulting in his suspension. Luckily, no one got seriously injured.

After an eventful first half, the score was 14-12. Both teams played well and were equally matched. Fans were excited to see what the second half would bring.

The second half started off with a successful penalty for Sporting CP. Dinamo București made some easy mistakes in the attack, but luckily, Sporting couldn’t use these for an advantage. Halfway through the second half, the score was 20-18.

No team managed to decide the match in this phase, both making equal mistakes in the defense. Sporting CP tied the score again, now making it 20-20. The Portuguese team’s defense started to crumble, giving Dinamo the chance to advance. Two field goals and one penalty gave Dinamo a lead of 23-20.

With five minutes left on the clock, the deciding phase of the match begun. With Dinamo leading 24-22, the atmosphere reached its peak. Everyone was standing up and cheering loudly for the last minutes of the game.

Sporting Cp changed their defense to a 5-1, making it more aggressive, proving they wanted this win. With a spectacular goal in the last minute of the game from Mohamed Shebib, Dinamo București won, making the final score 26-24.

As soon as the final whistle blew, the players fell into each other’s arms, knowing that they just wrote history for the club. The atmosphere was enormous with everyone feeling the adrenaline from the pitch, but also the relief that this important match was over.

“[This was a] magic night for us,” Dinamo București Coach Constantin Stefan exclaimed after the game, stating that he thought they “deserved the qualification.”

Dinamo’s captain, Dan Savenco, added that they won with the “help of the fans” and that this game is the “best result in the history of Dinamo.”

From Communism to (Almost) Equal Pay: How Women's Rights Have Changed in Romania

A Students' Quick Guide to the US Presidential Election Race