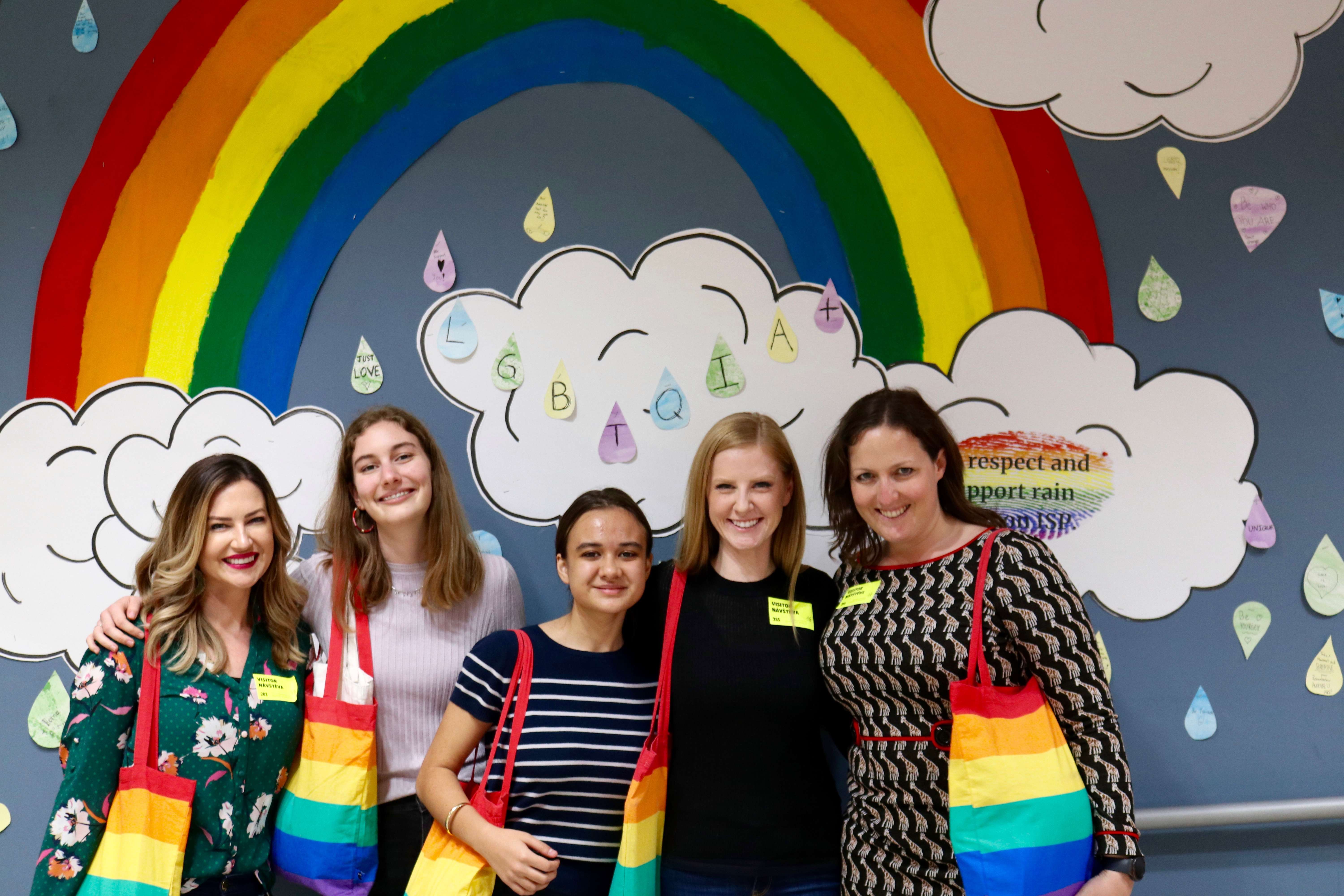 After Mara T. wrote the article, “Romania’s LGBTQ+ Community: Why AISB Needs to Lead the Charge on Acceptance,” she was contacted by the leader of the International School of Prague (ISP)’s Gay-Straight Alliance (GSA). This led to an invitation for us (Mara, Ioana D, Journalism Teacher Jennifer Stevens, and AISB Counselors Michaela Young and Stephanie Finnell) to visit the school and to see how we could start our own GSA at AISB. Here’s what we learned.

On April 11th, we embarked on our trip to Prague. Little did we know that it was a journey that was going to change the way we perceived acceptance and love in a school environment.

ISP already has in place two very successful GSAs: Spectrum for high school students and Pride for middle schoolers. They also have something called Ally Week, which includes a series of events meant to encourage diversity and celebrate the LGBTQ+ community.

Established in 2015, Spectrum was founded by Class of 2016 Maria Hamill. Outside the secondary office is a framed letter, celebrating Hamill and her dedication to the community. In the letter, the club states that creating the group was “a labor of love” — one that Hamill was sure would “spread love, communication and open-mindedness” at ISP. She had already formed a GSA at the International School of Beijing as a 9th grader, and said that it helped her to find confidence–to find an identity.

After Hamill graduated, the group of enthusiastic students continued the club’s mission, setting the foundation for the school’s first-ever LGBTQ+ events: Ally Week and Day of Silence, in which students take a vow of silence to highlight the silencing of LGBTQ+ people.

Despite the challenges the group faced when planning the events from scratch, current Spectrum members say that they were integral in the positive change that swept the community.

Following the successes of the GSA and the consecutive tradition of Ally Week, Spectrum members petitioned and created a gender-neutral bathroom as part of their initiatives to enlarge the spaces where everyone can feel safe and accepted.

After talking to teachers and students from the ISP community, we gained a better understanding of what it means to celebrate diversity and create a safe space for those who are part of the LGBTQ+ community and also their allies. We also learned that the school’s mission statement should be used as an instrument of change for the improvement of our school.

“The school’s mission is very important to us as a community, and both students and educators take it very seriously,” says ISP Director Arnie Bieber. It was clear from our visit that the school’s mission (“Inspire, Engage, Empower”) was not just a mere formality; but rather, a clear guideline that maintained the well-being of the student body.

In fact, Middle School Principal Danielle Fredericks says that “most of the LGBTQ+ initiatives that we have at our school today are because of the mission of our school.”

Dr. Bieber explains that this is because, when the students wanted to start up a gay-straight alliance, “there’s no way anyone would have stopped it.” The Spectrum and Pride clubs both inspire, engage, and empower students. “It is much more powerful and effective when students are the ones to start these initiatives,” says Bieber.

We were invited to join a Spectrum meeting on our visit, and it was refreshing to see how many students were willing to speak up for what they believed in. Everyone introduced themselves, and included their “preferred pronouns.”

By hearing “my preferred pronouns are she and her; he and him; or they,” it really made us think about the importance of inclusion. ISP has several transgender students, including Spectrum’s leader, Oz. He has gone through an inspirational journey with the support of his peers and also social justice group TransParent.

But Spectrum isn’t just people who identify as part of the LGBTQ+ community, it’s for allies –people who stand up for equal rights and equal treatment. Spectrum’s ally members told us that they all share a common goal: to make everyone feel like they belong.

It was empowering to sit at the table with the students that represent the key motor of change in their community, and it was even more touching to see all of their hard work and passion becoming such a tangible success for ISP.

After having all sorts of great conversations, it became clearer to us just how much our school’s perspective on diversity and inclusion needs to shift.

Here’s what we propose for next school year:

At ISP, there was a lot of mention of giving the students a “safe space” where they could feel free to be their true selves, and to express ideas without the fear of being judged or made fun of.

Spectrum member Tereza says that for her, this has been the Spectrum club, as those meetings allow her and her peers the ability “to feel accepted and celebrated for who we are.”

We not only need to form a group like Spectrum, but also work on establishing safe classrooms (see sign above) and a community that uses inclusive language. Fredericks says that the signs alone have “helped students feel more welcome at school.” She claims that they’ve strengthened the school’s mission of empowerment and to spread wider acceptance.

Finally, safe spaces are about inclusive language. Tereza says that one of Spectrum’s goals this year was to eradicate the phrase, “that’s so gay.” The club members have learned that this type of change is hard, but that people are responsive–especially when you choose your words wisely. “I don’t tell them they can’t say it at all; just not to say it around me… that it hurts my feelings,” Tereza adds.

The GSA club would not only be a place where students seek guidance and allyship, but could also be a catalyst for change through student-led initiatives. At ISP, the changes made for students by students speak to the strength and the unity of the student body.

Among the many incredible initiatives started by Spectrum, the one that stood out the most was the implementation and design of the gender-neutral bathrooms. Once again a student-led initiative, the gender neutral bathrooms are a reinforcement of Prague’s strong stance on anti-bullying and tolerance.

While we know these kinds of initiatives could not happen in the first year of the GSA, we could start taking the initial steps for student-led events to take place–especially ones to celebrate the community and to build allies. This could be similar to ISP’s Ally Week— a week-long series of events which support allyship between students, regardless if they’re in the LGBTQ+ community or not. This comes in the form of LGBTQ+ art projects, promotion of films and books, guest speakers and various activities that bring people together.

The way forward for AISB

If you haven’t noticed, we were pretty inspired by our trip to ISP and want to start up our own GSA for the 2019-2020 school year. We’ve made so many strides this year toward being a more inclusive space, and this is just one more step in the right direction.

Not only are we planning on starting up our own GSA, but ISP is hosting its first-ever “CEESA-wide Pride” conference in November, with interest from seven different CEESA schools (Stay tuned for a follow-up article). Let us know in the comments if you’re interested in attending.

We know that many people will say that our school isn’t ready for a GSA, but we disagree. It’s important that we make AISB a school where everyone feels accepted for who they are. Let’s engage in important conversations concerning LGBTQ+ rights; prepare students for life outside AISB’s walls; and inspire members of our community to celebrate love and diversity in all its beautiful forms.