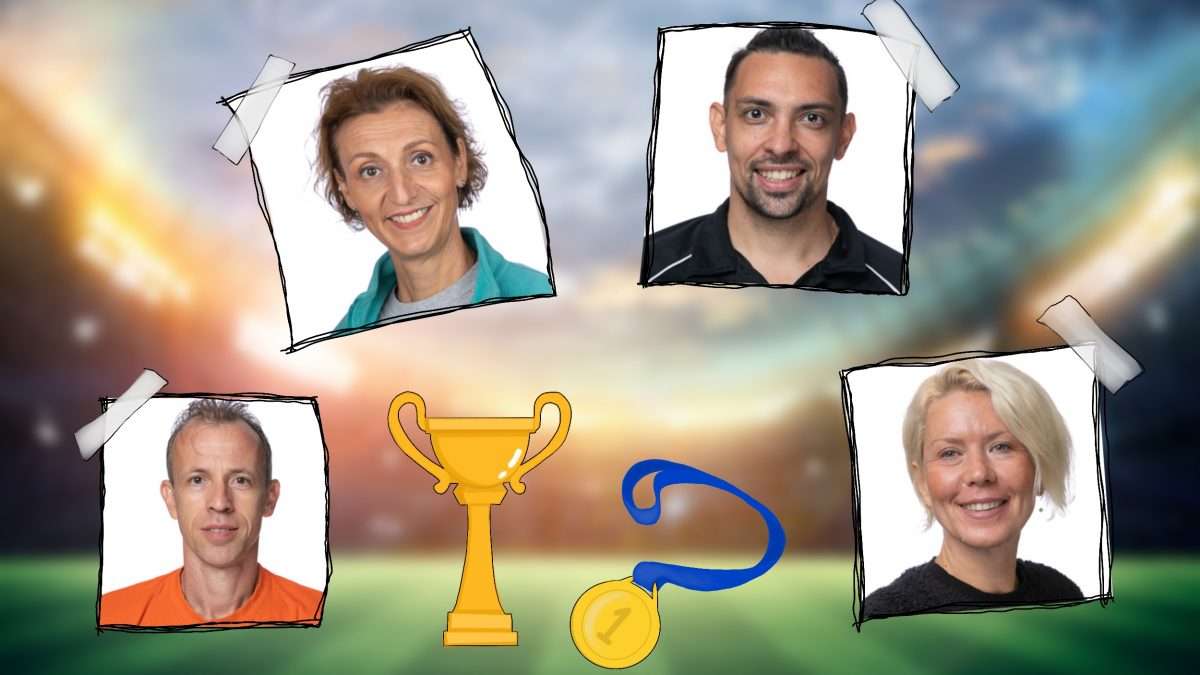 Have you ever wondered what our PE teachers did before coaching us? What experiences shaped them into the encouraging and compassionate coaches they are today?

Most people know Veronica Ciorniciuc, or “Ms. Vera,” for her bubbly personality and for her understanding nature, but what they don’t know is how she got there.

Ever since she was young, Vera had a special talent for swimming. She swam in high school, then she swam for the national Romanian team, and then later on in college. With practices six days a week, and sport camps every summer, she had a cramped schedule.

Vera remembers this time as one full of accomplishment and medals, but also abuse. Practice was rough due to her coach’s “methods” of teaching. “She was beating us a lot,” she says. “It was in Ceaușescu’s time, so performance was made with a lot of beating of the students.”

Not only that, but Vera’s mother passed away early on in her swimming career, forcing her to drop out of competitions. She had to start taking care of the house and start being there for her family. She also started thinking about her academic life and how improving that could get her a good job.

“I had to do things that normally a kid is more protected from,” she says.

There was light at the end of the tunnel though, thanks to a newfound passion for coaching. After she fully quit swimming, she started as an assistant coach for the Romanian swimming team, at the age of 18, where she realized just how much her knowledge for the sport could help other people.

Here, she was able to coach in a way opposite to what she experienced when she was younger—focusing on kindness and understanding, providing advice in a thoughtful, gentle manner.

Vera continues this approach at AISB, inspiring students to become better versions of themselves, on and off the field. She also continues to swim, although it’s now for fun, and to fuel her “sports addiction.” She explains, “I wouldn’t be able to be myself without doing sports.”

Growing up, Andrey Kavun was involved in a variety of sports. He played tennis, swam, and also did ballroom dancing. But due to financial reasons, he started getting serious about his passion: basketball. Kavun played all throughout high school and then played for the Central Sports Club of Army in Uzbekistan, which won him (and the team) the national championship.

Kavun’s main goal was always to balance academics and sports; and while it wasn’t easy, he was determined to have a successful career in basketball. He describes long hours on the court, and late nights studying, but explains he was able to manage because of internal motivation and a productive routine.

When thinking back to high high school years, Kavun has fond memories, but does recall one experience with sadness: the night of the senior waltz.

In his country, a waltz at the end of the senior year is a big deal. It takes place on graduation evening, and for it to be an organized event, the seniors practice months before performing. Since he had basketball practice twice a day, Kavun couldn’t attend any of the dance practices, which made him unqualified for the final performance.

It’s still something he thinks about: not being able to perform with the rest of the class— “just standing aside, watching.” However, Kavun says he doesn’t regret prioritizing basketball, because of what the sport taught him.

After high school, Kavun played the sport professionally, and learned the key aspects to becoming a better person and becoming a better player. He says his coach is the one who really helped him understand cooperation and organization by always believing in him and always trying to keep the team together.

An Olympic athlete is not built overnight. It takes motivation, determination, a great coach and so much more. Just ask Arif Akhundov, a former professional sprinter, who competed in the men’s 100m competition at the 1996 Atlanta Summer Olympics.

His story starts in Azerbaijan. He started running at the age of 11, when he went to a sports school, where he competed and trained to become a professional sprinter.

Arif always found a way to motivate himself. In his early years, when he would play outside with his friends, he would always play for the underdogs, which gave him a lot more motivation and confidence. “It’s easy to win with the good team,” he says.

In high school, he didn’t go to a lot of parties or participate in other activities. He was focused on sport. He reflects by saying that he doesn’t regret any of those years because “[his] choice was to sacrifice something that wasn’t a big priority for [him].”

But he wasn’t alone in this journey; his grandfather was one of his main supporters. He would take him to training and would help him deal with stress before a competition.

Another one of his supporters was his coach. His contemporary style of coaching is what inspires Arif when coaching now. He would make Arif plan out all of his training sessions and would reflect with him after a competition. He also taught him the importance of learning from other people as well as the lesson of “how to lose and how to win.”

One of his biggest challenges was a knee injury he had just a month before his first world championship. Everyone thought that he wouldn’t come back but he and his coach had a very different mindset. He trained at the beach everyday, motivated to bounce back. “Only my best sporting achievements came after my injury,” says Arif.

He went on to compete in the world championship, the Asian championship and the Olympics.

“It’s impossible to be successful just because you’re good.”

After he finished his running career, he started thinking of a job that would combine his love for sports, kids and the English language; so he ended up becoming a teacher and a coach. “My biggest passion is to coach,” he tells us.

The beloved Alina Hora has truly experienced teamwork at its finest. She started playing basketball in grade 5, then went on to play in high school, and then in Division A in Romania.

During communist times, sports were important, and basketball was no exception. Hora and her team got to travel a lot for competitions and the club paid for all of the equipment (except for shoes), and even the training during high school. Traveling was a huge privilege because during Ceaușescu’s reign, “it was not so common to do those things.”

The team was very close with one another. They went to the same school, had parties and gatherings together, and also had trained together. “It was like a family,” says Hora.

She doesn’t feel like she missed out at all on the normal high school experience because her social life was there, with her team.

And the culprit for this teamwork? Her former coach. He always encouraged the team to work together and not to look at the sport as an individual thing.

“He was my mentor, everything that he was doing gave me the start in my teaching career, in my coaching career,” she explains.

After the age of 18, the team spread apart. Some quit basketball completely and some moved, including Hora, to different teams. They still keep in touch through Facebook and also had a gathering about two years ago.

Hora says it was hard to make the change from player to teacher, but that she enjoys transferring all the amazing lessons provided by her former coach. And while she misses being on the court, she stays connected to sports by swimming, jumping rope, and giving her son basketball advice.

What Sport is All About

All of these touching stories from our teachers prove just how much sports can impact someone’s life. It helps you stay healthy, organized, and so much more. Once you have this routine and motivation, you never lose it. It becomes a lifestyle.

So, what happens when you have a department full of former athletes who know the true meaning of teamwork and hard work? You get a safe and collaborative environment. Ms. Hora agrees by saying: “We know how to compromise, communicate and just work together.”

Whether you play a sport as a hobby, or professionally, you will be impacted by the exhilarating moment of winning or the jokes you have with your teammates,  because that’s what sport is all about. Having trust in yourself and in others.

Bucharest's run-down buildings: the silent testimony of decades of neglect