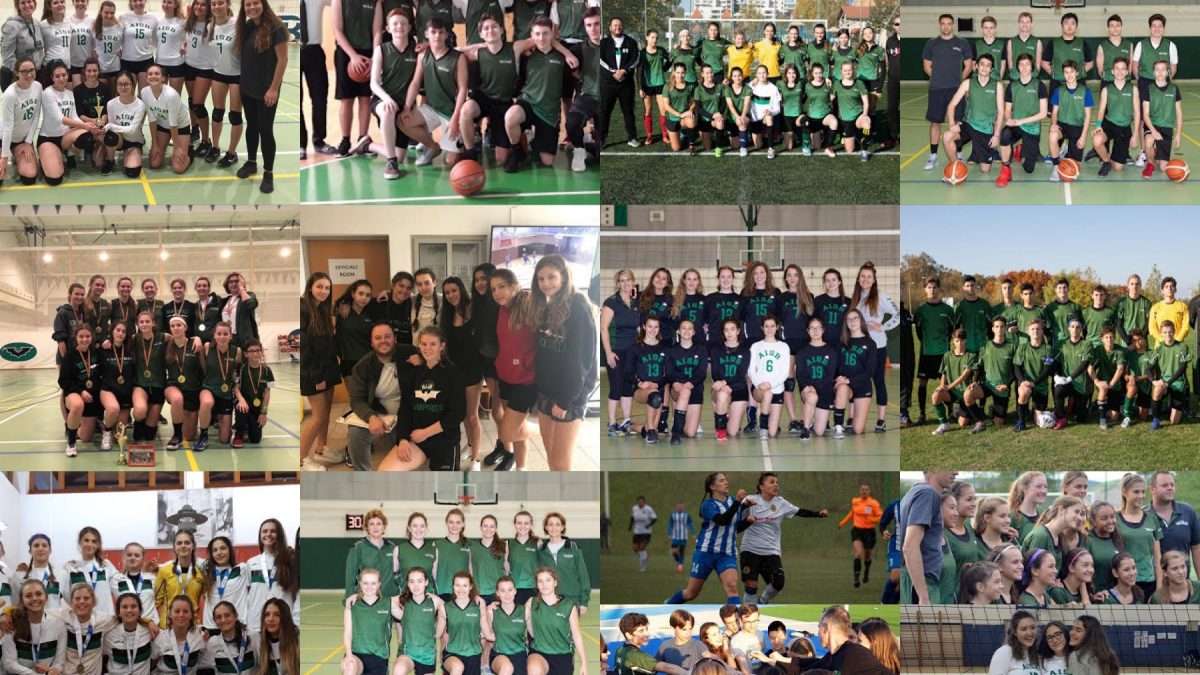 It’s been a week since AISB seniors threw their caps in the air and waved goodbye to an extremely difficult two years of online learning. Not only did these students miss out on in-person DP classes and social events, but they also missed out on something extremely important to many of them: sports.

“If you’re a senior and you’re somebody who is passionate about sport, to have that taken away from you must be heart-wrenching,” says AISB Athletics Director David Hughes.

Hughes explains that most of his year has been spent planning and re-planning how to bring back team sports. Unfortunately, because of fluctuating case numbers and social distance requirements, he wasn’t able to make it happen.

While he knows that the lack of sports has been “devastating” for many of the upper secondary students, he does speculate that teams will play in some capacity next year, and reports that the athletics department is looking at working with schools in neighboring countries, where students can travel by bus, since CEESA tournaments won’t resume until the autumn season of the 2022 school year.

“I truly sympathize with the senior athletes and what they must have gone through this year without their sports,” says Hughes. “These community activities are so important to students, especially seniors.”

The seniors’ impact on AISB sports: A spotlight on Kat V. and Clara S.

Recent graduates Kat V. and Clara S. have always had a passion for sports. They both played a major role in growing the school’s sports community, especially in football and basketball. We could even see them inspiring young athletes up until their graduation ceremony.

“I have not seen a team so happy as to when Kat or Clara are calling their team over for their huddle and they’re doing ‘1,2,3 Vampires!’ and I just think they’re able to connect quicker to someone closer to their age…especially when the kids see they’re young, but they also know what they’re doing” — AISB Activities Coordinator, Alex Sota.

Clara was the first student to coach the U-11 basketball team and this alone changed how older students could make an impact on younger or newer students’ athletic experiences at AISB. Alex Sota was her coach for several years and confidently says that the sports community wouldn’t be as strong as it is today without her help.

“I definitely think it changed school culture for the better because one, it empowers our younger Vampires to want to be in the school community when they’re older. Secondly, it role models for other teams and for our families,” Sota states.

At the beginning of the pandemic, Clara mentions she was trying to stay as active as possible by doing home-workouts by social media influencers such as Chloe Ting. Unfortunately, assignments started piling up and deadlines were approaching at an increasing rate; so without a set time for after-school sports practice, physical activity became less of a priority.

As one of the captains of the varsity basketball and football team, she says that over the past few years in high school, the bonds she and Kat have created with other teammates are “extraordinary” and how far they have come together as a team is also “quite amazing.” Not seeing them on a regular basis was tough, and made online schooling that much more difficult.

“All these years, we’ve created a team and built so many bonds and it was so sad to not get that final goodbye,” says Clara.

As for Kat, she’s been able to continue her love for soccer with a team called ACS Dream Team and is doing remarkably well. She plays four times a week, one of which is a game, and her position is left-wing.

The fact that the final exams were canceled was a huge relief for her, as it gave her more time to devote to soccer. She even says that she’s looking forward to playing soccer during her time in university. “Sports always kept my life balanced and took my mind off of things,” she says. So when the pandemic took that away, her life felt “weird.”

“The feeling of playing on a team outside of school is so different. I just miss playing with the team we grew these high school years and not being able to end that somehow, especially on a win is upsetting,” Kat describes.

Jonathan T. and Caroline S. on learning to cope without a team

Former AISB basketball player Jonathan T. says this past year in quarantine was “incredibly tough” on him, mentally. Like Kat, he missed that distraction—something to break up the continuous studying—something to take his mind off of the stress.

For him, his way of coping and “wearing everything off” was basketball. When it was taken away, he says he had to physically decide to go to sleep and would end up staying awake till 5 am on certain days. Basketball “drained him,” he says. “I put my heart and soul onto the court,” which is why he’d get home exhausted and be able to get that good night’s sleep.

But the hardest part for Jonathan was missing out on last year’s CEESA tournament.

“I was really looking forward to the home crowd and not traveling and everything. I was really shocked when I found out it was canceled. And just really sad,” says Jonathan.

Recent graduate Caroline S. says that sports kept her balanced and was what used to fill her time up. She also says that sports were what made her “overall a happier person.” It was her outlet, and what kept her in shape. Without it, “It was very weird,” she says.

“Starting volleyball, I got to meet so many new people, from different grades, and I really loved it. We were just this big family and we really liked each other and we played well and knowing that I couldn’t come back and do that in my senior year… it was sad leaving on that low note,” Caroline says.

The pandemic hasn’t been easy on us, Caroline admits, and it was particularly challenging for the seniors, who practically spent their entire DP years online. But now that they can put all of this behind them, the graduating class of 2021 seems optimistic, and many plan to continue their love for sports at university or for clubs while on gap years.

They also want to encourage younger students to “stay positive,” as it’s only a matter of time before sports will start up again.