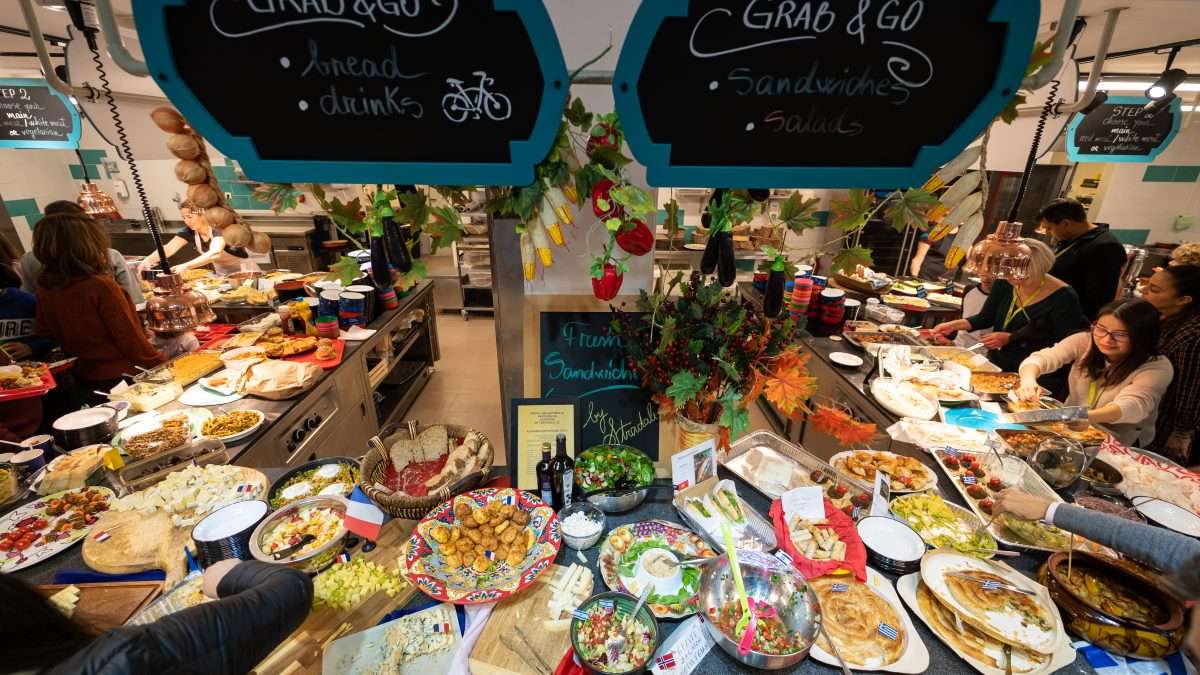 Due to the COVID-19 pandemic and the consequences that go with it, the traditional Harvest Festival at AISB will not physically take place. However, it would be a shame not to celebrate this event that transmits important values such as sharing and cultural identity. Therefore, 8.4B has created an adapted version of it, sharing their favorite recipes from their respective home countries.

Originating from the Ottoman dish called “shish” (which consists of meat skewers grilled vertically on a spit), the döner kebab made its appearance in 1972. It is believed that Kadir Nurman, a Turkish worker in Berlin, converted the traditional Ottoman meal into a more portable version, which is how we know it today: wrapped in pita bread.

Made by stuffing meat, accompaniments (lettuce, tomato, and onion), and a sauce inside a pita or “durum” bread,  here are two recipes to make your own döner kebab, with beef and lamb, or chicken.

Created during the Song Dynasty in Northern China, Tang Hulu has become a popular street snack all over China, especially during winter months. Usually served on bamboo skewers, this candied fruit differs from the others due to its crunchy and hard shell. Traditionally made with Chinese Hawthorn, you can use other fruits as well. Here is the recipe Yuan Fu W. chose for us.

The croissant: stereotypically one of France’s most famous dishes, actually comes from Austria. While there are different stories, the first documented proof of the croissant comes from August Zang’s bakery in Vienna in the early 19th century. It was called the “kipferl,” but people started referring to it as a “croissant” due to its crescent shape.

In 1915, the French baker called Sylvain Claudius Goy wrote a recipe for what we know as the modern croissant. Loved by French bakers, it became popularized after the second world war and mass food production. Clement L. shares his favorite recipe for flaky and buttery “viennoiserie.”

Romanian Cozonac, from Anastasia B.

Usually baked for Christmas and Easter, this typical Romanian bread was first created in Ancient Egypt. The Greeks then made it with honey, raisins and walnuts. Finally, the Romans changed the dough, which inspired the modern-day cozonac that has become a traditional dish in Romania.

Here, they make it with sweet bread, raisins in the middle and depending on the likings, some may add lemon zest, rum, and/or walnuts. To fit the spirit of this upcoming Christmas, try this recipe at home.

This dessert, which is probably the most famous in Romania, originated from the Austrian-Hungarian empire, and was then adapted by Romanians in the Moldova region. The meaning of the word “papanași” means “food for the children” in Latin.

Very high in calories (but worth every last one), it consists of a fried pastry with soft cheese or cottage cheese inside and is usually covered with sour cream and jam. Ana Maria V selected the recipe she prefers when making this dessert.

Similar to the Turkish doner kebab and the Arabic shawarma, the gyro (pronounced “yee-roh” which means ‘to turn’ in Greek) was created in Greece two thousand years ago. The version of it known today was made in 1922 when Armenian refugees set up street corner shops in Greece, selling thinly sliced meat.

After World War II and the immigration of the Greeks, the gyros spread everywhere across the globe. It might even be the first type of global fast food. This recipe, made from chicken skewers, a cucumber salad, and tzatziki sauce wrapped in flatbread, has become the number one choice of food for tourists when visiting Greece.

First created in Persia, this sweet dish transferred to India when the Mughal Emperor invaded the country. As for the name, “Gul” and “Ab” comes from Persian, respectively meaning flower and water, while “Jamun” means black plum in Hindu, referring to its shape and size.

This dessert, made from a ball of dough and crystalized sugar, could be argued as the favorite dessert of Indians. This is the recipe selected by Vaibhavi C.

Indian Butter Chicken, from Jai B.

The story of Butter Chicken comes a few decades ago, in pre-partition India. In a modest sweet shop in Peshawar, Mokha Singh created Tandoori Chicken. As he was getting older, his grandson Monish Gujral took over the shop and he then created a gravy to immerse the Tandoori Chicken in, which led to the birth of Chicken Butter.

After India was partitioned, Gujral moved to Delhi and set up a similar shop. His butter chicken quickly became popular. Today, 70 years after, the small shop has become a chain with outlets across the country.  This dish made of marinated chicken, loved by millions of Indians, can be made at home with this recipe, chosen by Jai B.

This campfire treat with a bizarre name comes from the United States and its first origins trace back to 1927. It appeared in the guidebook, Tramping and Trailing with the Girl Scouts as a recipe for campfire treats, and is short for “some more.”

Americans swear that graham crackers are the only type of base that will do, marshmallows need to be roasted over an open fire, and placed over a block of Hershey’s chocolate. If you ever get your hands on these ingredients for a camping trip, try out this recipe, picked by Jonathan R.

Sweden’s version of the meatball, the Kottbullar, has been claimed by the Swedish government to come from Turkey, as King Charles II brought the recipe when coming back from exile. This claim has caused controversy in Sweden. The only real proof of its origins comes from 1755, as Swedish cookbook author Casja Warg published the first known recipe.

Today, it is considered the country’s national dish. Made with mince pork, beef, and grated onion, the recipe for you to make it at home can be found here.

First created in 1994, cheesymite scrolls have become a popular snack in Australia. They are commonly found at Baker’s Delight and Brumby’s, two large bakery franchises, and consist of bread swirled with Vegemite (a salty yeast extract spread) and cheese.

This recipe is very easy to follow and will surely be enjoyed as an afternoon snack or complement to a meal (if you can find Vegemite, that is!).

These small pancakes come from Dutch monasteries as they were used for communion. During the French Revolution, the shortage of wheat flour made the Dutch monks experiment with buckwheat instead. And around 1815, these small pancakes were invented and given the name of ‘Poffertjes’ as they puffed while baking.

Poffertjes quickly spread and gained popularity across the country, and they are now one of the main specialties of the Netherlands. You can find a recipe for them here.

Thank you to 8.4B for cooperating and helping to write this article!

Tell us in the comments below, what is your favorite recipe from your home country?