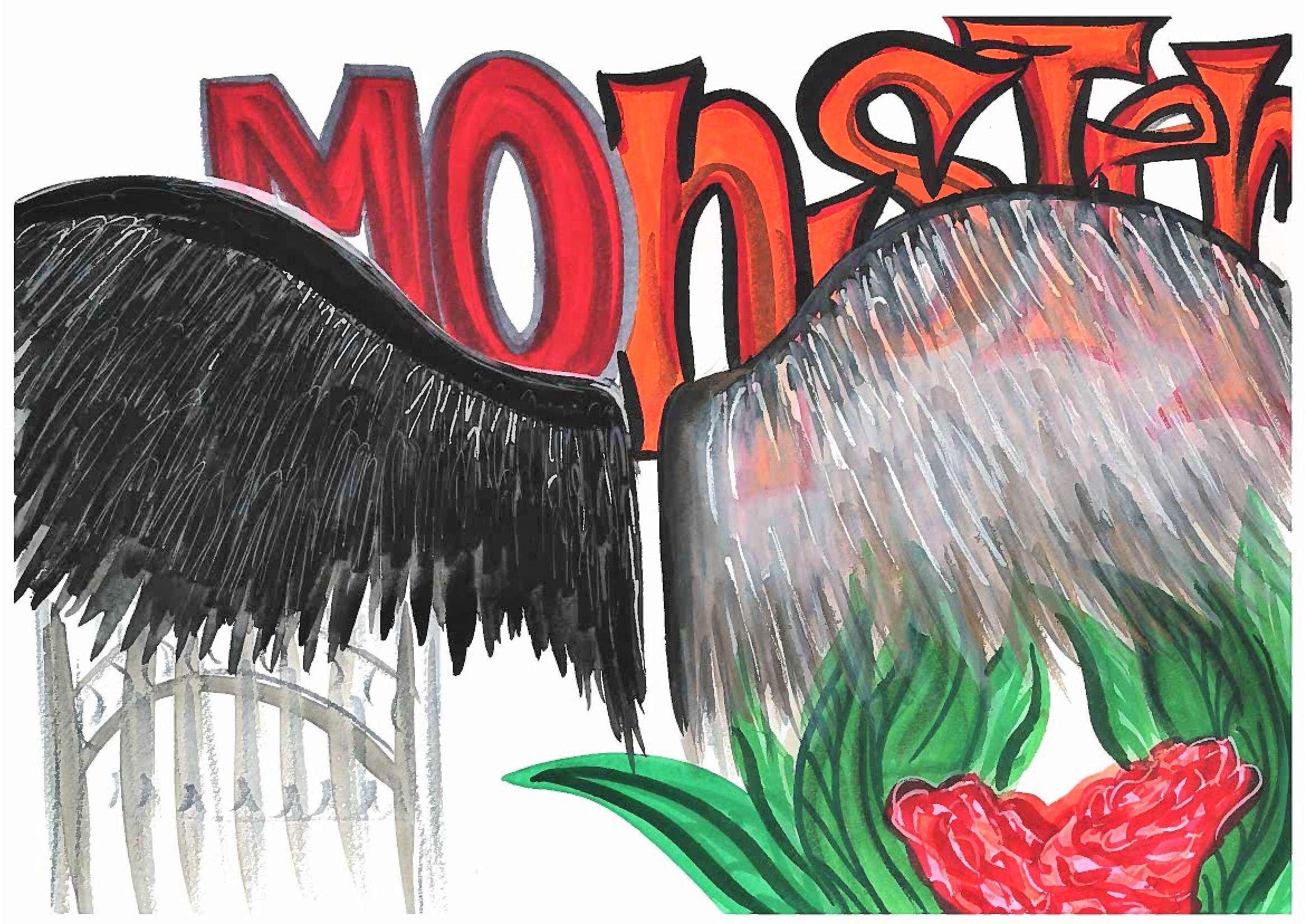 The first monster that haunted Scarlet’s dreams was from a book called “The Angel’s Wings.”  It was a peculiar fairy tale about a young angel boy, named Ectoras, who lost his wings fighting a gruesome creature who called himself: The Shadow of Nightmares.

The Shadow of Nightmares was a deadly creature who moved like smoke, poisoning children’s minds and shattering their innocence. Scarlet was terrified by its blood red eyes and by its ability to blend in with the darkness. She held her breath throughout the whole book and only when the ending came did she finally let out a sigh of relief.

“…and so, Ectoras defeated The Shadow of Nightmares,” Scarlet’s Grandmother read, “…stole his wings back and saved millions of children in the process. The End.”

“Wow.” Scarlet wasn’t sure whether to be terrified or relieved. She was happy that the angel defeated The Shadow of Nightmares, but she also wondered whether there were more monsters like that out there.

“Grandma?” Scarlet asked, looking at her as she put the book back on the shelf. “Do monsters exist?”

Her grandmother sat beside her on her bed and contemplated her answer. “It depends on the kind of monsters you’re talking about,” she finally said.

“There is more than one type?” Scarlet hadn’t thought about that and shivered at the thought of monsters worse than the one that had controlled her dreams for a very long time.

“Not like the ones in fiction books,” her grandma cut her thoughts off. “But other ones, yes.”

“What other ones?” Scarlet inquired as her grandma tucked her in.

Scarlet hadn’t expected that answer. “But humans are good,” she argued. “You and I are humans.”

“But not all humans are good, like you and me,” her grandma said, kissing her forehead. “There are some that have a lot of evil pent up inside them and that evil destroys the good in them, forcing them to do unforgivable things.”

“I don’t understand.” Scarlet was conflicted. How could that be possible? Mommy and Daddy were humans; she was a human; Grandma was a human… They weren’t monsters. Her friends weren’t monsters either. David could be rude sometimes, but Scarlet’s mom said that he was just jealous and didn’t mean any harm by it.

Scarlet’s naivety made her grandma smile. If only her seven-year-old mind knew how brutal and violent the world really was. “You will understand someday, my little fighter,” her grandma said. “Now close your eyes and let your sweet dreams lull you to sleep.”

Scarlet, exhausted, did exactly that. “Goodnight, Grandma,” she sighed sleepily, and let herself dream of the angel boy that saved them all.

Rain was made of water–something that gave life to humans, and yet it could still be deadly.

Scarlet watched as sharp raindrops attacked her grandmother’s grave and drowned the grief of her grandmother’s loved ones. She felt like a fist was grabbing her heart and suffocating the life out of it. Her grandmother had been the only one who understood her. How could she be…gone?  How could all her stories, her laughter, her jokes, her love and her warmth…just vanish?

Tears slid down Scarlet’s cheeks, but she did nothing to wipe them away. Her grandmother had always told her not to hide her emotions and allow the rawness of her feelings to be shown. “It’s something people are afraid of,” she had told Scarlet once, when Scarlet had a bad day at school and hid under the covers, trying to stop her tears and the pain she felt in her chest. Her grandmother had sat with her and spoke to her in a comforting tone, telling her to let it all out and to stop trying to hide her emotions. “Feelings don’t bite; trying to hide them is exhausting. Showing them, however, is something not many can do, which is what makes it beautiful.”

Scarlet was brought back to the dreadful present when she felt someone squeeze her shoulder. “Oh, Scarlet, honey,” her mother tried to sound sympathetic. “It was past her time.”

Her grandmother was only 75. It wasn’t even near past her time. How could her mother say that? Scarlet sighed, knowing that from her family she would be the one who would miss her the most. Her family hadn’t appreciated her grandmother because they felt like her behavior was inappropriate and incomprehensible.

Her grandmother had her own unique view of the world and Scarlet’s father never wanted to hear her opinions. When Scarlet was small he had always told her grandmother to keep her mouth shut when Scarlet was around so that she wouldn’t hear the nonsense she was spitting.

“Did you talk to the doctor?” Scarlet whispered, sparing a glance at her mother’s fake tears. Of course she had to put on a show; nobody would truly want to know how heartless and cold Scarlet’s family really was.

“I told you,” Scarlet’s mother said, her voice filled with warning. “She missed a couple of pills that she needed to take. You know how forgetful she could be. It’s such a shame that her own mistakes have buried her.”

Scarlet winced at her mother’s harsh words. The hatred was evident only to Scarlet’s eyes though; her mother always put on a facade in public.

“Are you sure?” Scarlet persisted. It was true that her grandmother was forgetful, which is why Scarlet called her every night to ask if she had taken the pills her doctor had prescribed. She had always told Scarlet yes.

“Mother, didn’t you notice how healthy she seemed the past couple of months?” Scarlet couldn’t understand how her grandmother ended up this way. “I took such good care of her. I just can’t comprehend that she ended up this way.”

Scarlet thought of the amount of times she went to her grandmother’s house after her stroke, to make sure that she was doing everything the doctor told her to do. Scarlet had taken good care of her, yet she had still ended up dead on the floor in her kitchen, where she constantly baked and sung, on the 13th of December. It was  the same day Scarlet brought her groceries and checked up on her to make sure she was doing fine. She had been her jolly self and Scarlet had left her after a few hours, happy to have spent some time with her.

That night, her father had received a call saying that her grandmother had been found dead. There hadn’t been any marks on her and the doctor had told her parents that it was probably caused by another stroke, which led him to believe that she had not been following his instructions properly. Scarlet knew that wasn’t true. She was desperate for answers. “What if there was actually a mix up and -”

“Scarlet.” Her mother cut her off. “That’s enough of your hysterical performance; you are being ridiculous.”

Scarlet clenched her fists and looked away from her mother. Scarlet’s mother waited patiently for Scarlet to apologize, but when she didn’t, her mother sighed, frustrated with her immature seventeen-year-old daughter.

“You really dont give a damn,” Scarlet hissed suddenly, breaking her mother’s thoughts and looking into her cold face. “Do you?”

Her mother, surprised by Scarlet’s outburst,  smiled fakely and dug her sharp nails into Scarlet’s shoulder, causing Scarlet to wince. From a distance it looked like a mother comforting her daughter.

“Behave.” She snarled and let Scarlet go.  Her mother looked at Scarlet like she was looking at dirt that she would love to step on. Scarlet had never seen her mother look at her like that before…almost like Scarlet was her enemy. Her mother gave her one last glare before shaking her head and walking away.

Scarlet had always thought of her mother as beautiful, with her long raven colored hair and her green emerald eyes; but at that moment she saw the ugliness beneath the beauty and she despised it. It made her wish that she didn’t look so much like her.

Scarlet  turned around to look at her grandmother’s grave once more. It seemed impossible that she was in a grey coffin surrounded by brown, wet mud. She hated dull colors. Her grandmother would have always worn something bright yellow, green or pink. She stayed away from any dark colors, saying that life was too short to waste time on them. Her grave just seemed so lifeless…

Scarlet wiped away the last tear and turned around and started walking away. But before she could take another step she felt a small cold hand wrap around her wrist, causing an eerie shiver to travel across her skin. Scarlet gasped and whirled around to see who had touched her. She saw no one.

She studied the area around her grandmother’s grave closely, trying to figure out if a person was hiding, but found nothing. Scarlet shook her head, trying to get rid of the madness that had overtaken her. Her imagination was running wild again…but that terrifying feeling that had taken over her….when that small hand touched her…that couldn’t have been normal.

Scarlet shook her head once more, trying to get rid of the ugly thoughts attacking her mind. Her mother was right in some ways. Her imagination could truly be ridiculous. It made sense though, to have this kind of feeling in a graveyard when the rain had stopped and the darkness had taken over.

Suddenly, everything became silent. Scarlet realized that she was the only person around…Did all of Scarlet’s grandmother’s friends leave?

From a distance an owl hooted, causing goosebumps to conquer Scarlet’s skin. Unwelcome noises started to fill her ears such as the rustling of leaves, the whipping sound of the wind.  Was that the sound of a gate closing? Scarlet wondered, too frozen from fear to move. She closed her eyes and took a deep breath. I’m freaking out over nothing, Scarlet thought, I need to stop. Graveyards are always creepy; it didn’t mean a serial killer’s gonna jump out of the bushes and murder me. The sound of a gate opening means nothing. It was probably someone who works here… Scarlets thoughts trailed off and she took another deep breath.

She had to relax. She counted until five and opened her eyes, ready to walk away, when she noticed something she hadn’t before. There was an envelope attached to the large bouquet of roses Scarlet had put near her grandmother’s grave. Scarlet had ordered those roses and asked for them to be colored yellow, pink and green, knowing  that her grandmother would love them if she had been here. Some of the color had seeped onto the letter because of the rain.

Scarlet felt fear consume her slowly and didn’t lift her eyes from the envelope she was holding. She tried to stop her hands from shaking as she opened it, not knowing what she would find in it. There was a small card… Scarlet took it out of the envelope clumsily, still scared of what she might find…she looked at what was written on it…

Run? What was that supposed to mean, Scarlet thought, petrified, unable to take her eyes away from the word. Run from what?

The eerie shiver came back to haunt her and Scarlet felt a presence behind her. She whipped around, barely having any time to scream before she felt something sharp hit her head and darkness engulf her…

South-Sweet, North-Salty: Chinese Regional Cuisines You Probably Don't Know About (but should)

RM's Mono: The Album Everyone Needs In Their Lives

We are the Prisoners: A Poem on Living with Anxiety