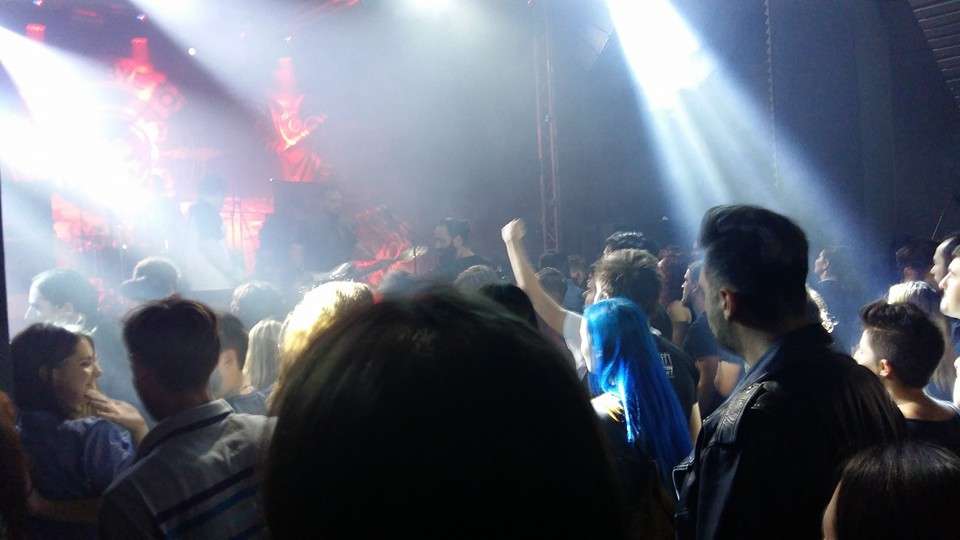 This article is part of a series, meant to bring attention to the Oscar-nominated Romanian documentary ‘Collective.’ As we approach the Academy Awards on April 26th, we hope this story will encourage more people to view the film and demand change.

From age four, AISB Teacher Delia Țugui’s son, Vlad, carried around a pair of drumsticks. A gift from his father, Vlad held them with pride, anxiously waiting for the day his legs would stretch far enough to reach the pedals of his drum set.

When it finally happened, Delia and her husband enrolled Vlad at Rock School in Bucharest, where he would spend hours each day practicing the drums. On weekends, the family would attend rock concerts together— with Vlad close to the stage, eyeing the drummers.

In the summer of 2015, at an outdoor music festival, the family fell in love with one of the hardcore metal bands: Goodbye to Gravity. And when the band announced the release of their second album a few months later, Delia’s husband Vali bought tickets. Vlad looked forward to another opportunity to watch the band’s drummer, Bogdan Enache, up close.

The night of the concert, Delia, Vali, and Vlad joined approximately 350 others at the Colectiv nightclub in Bucharest.

Arranged in an old factory, the club’s infrastructure is common around Bucharest, having only one functional exit door and flammable polyurethane acoustic foam on the walls. Delia remembers how people were still allowed to smoke inside back then, even though ventilators weren’t properly installed. “We knew there was a risk […] when we took our son to that place,” she says. “That’s why we always found a place closest to the exit.”

As soon as the show started, Vlad and his father went nearer to the stage. From the back of the club, Delia could almost see her 12-year-old son inching up on his tiptoes, wide-eyed in amazement at the drummer’s skills.

Then, a fireworks display. “This wasn’t part of the program,” Delia says, and recalls a spark landing on the foam on the pillar next to her. Sizzling, it went up to the ceiling in seconds. “The head singer asked for a fire extinguisher,” Delia remembers. But it was already too late.

Someone screamed, “It’s burning! I think we should go out, now!”

Delia’s heart stood still as she looked at her husband and son who were on the other side of the club. “My husband told me with his eyes, ‘Go. We’ll be right behind you.'” So Delia turned around and headed for the door.

Panic overwhelmed people as they stampeded aggressively towards the exit, and Delia got pushed against the door. “I was squashed; I didn’t think I would be able to get out of there,” she recalls.

Suddenly, everything became dark, and Delia heard a sound—a muffled explosion. And moments later, Colectiv was packed with noxious smoke. “I tried to breathe and felt the air burning me inside,” says Delia with a heavy hand on her chest. Authorities later discovered that as the club became engulfed in flames, parts of the ceiling fell on the ground, spreading the thick, black smoke.

Fortunately, Delia managed to get out of the building, but quickly realized the back of her head was on fire. Instinctively, she used her hand to put out the flames, which resulted in minor burns that were later treated at the hospital.

Meanwhile, Delia’s husband and son were still in the burning building—sheltering in the cloakroom, breathing in to the fabric of the coats. Vlad kept his face covered, per his father’s instructions, and waited for an opportunity to escape.

“I was completely focused on listening to my dad’s instructions because he was the only way that I was getting out of the club alive,” says Vlad. “The only question that I remember posing to myself and then to my dad was, ‘Are we going to die?'”

When the time came, Vlad’s father pushed him out of the cloakroom, over a “mountain of people formed at the entrance, falling on top of one another.”

Delia stood outside, peering into the gloom, looking for her husband and son. She watched, helplessly, as people ran for their lives. “I saw a boy in a t-shirt with only the collar and hems remained…another young man’s blue jeans were on fire,” Delia remembers. She did what she could to help, but “All I wanted was to find my husband and son,” she says.

After frantically searching for her family, Delia found them covered in smoke and gasping for air at the main entrance. Thankful to have made it out alive, but concerned for Vlad’s wellbeing, they got in the car and drove to the hospital.

Delia’s husband and son remained at the hospital overnight for observation, and Delia went home alone. She felt lucky to have survived, but devastated for the 27 who didn’t.

Before going to bed, she wrote a Facebook post updating friends and family. And when she awoke, there were hundreds of comments—many criticizing her decision to take her son to the concert, as well as her affinity for rock and metal music. “You’re a satanist” read too many of the comments, while others said they’ll call Child Protection Services. “This was the worst part for me,” recalls Delia.

In an attempt to gain control of the situation, Delia wrote another post describing Vlad’s passion for music, the main reason they attended the concert. “I felt compelled to explain why we were there,” she says, feeling that she was being blamed for what happened. “Our country needs a different mindset,” she points out.

Delia comments that it’s not just the mindsets that need to change in this country, but the defective medical system and corrupt government—two things that became glaringly obvious after the Colectiv tragedy, when 38 more people died in ill-equipped hospitals.

“The government hadn’t imposed the safety regulations which they should have to the club owners, which is why there was only one entrance to the club and why we all ended up being trapped like animals,” Vlad adds. “Because of this, many young, innocent people perished and I could have easily been one of them. Just minutes before the fire broke out, I remember going to the bathroom, which was on the opposite side of the club from the exit. Had I decided to do this a few minutes later, I wouldn’t be here right now.”

In the years following the fire, the family attended all of the Colectiv demonstrations and protests, trying to do their part to change things for the better. “But change should start within ourselves,” Delia says. “We always blame it on the state, the government…but we don’t realize, it’s us.”

The strength to move forward

Delia’s family found the power to move on relatively easily. A psychological evaluation concluded that Vlad wasn’t affected by the fire. However, some of his friends from Rock School were close to people who died at the concert, and this ultimately pushed them to give up music.

“The day after the fire, I had completely forgotten what had happened the night before,” says Vlad. “Somehow, most likely as a defense mechanism, my brain just got rid of all my memories of the night. I even remember going to my parents multiple times the next day to ask them if the fire had really happened.”

Delia reveals she’s thankful that Vlad was only 12 when this happened—that he didn’t feel the same “pressure” as her husband, who tried not to talk about it. “[Vlad] just went back to being a 12-year-old kid,” she says.

It’s now more than five years since the family escaped the fire. Delia says unfortunately not much has changed, but she hopes the younger generation can step up to advocate for transparency and integrity within our country’s institutions. But with that said, she also hopes Vlad, now a DP student in high school, will choose to study abroad. “We all plan to leave Romania someday,” says Delia. “But that doesn’t mean we can’t ever come back.”