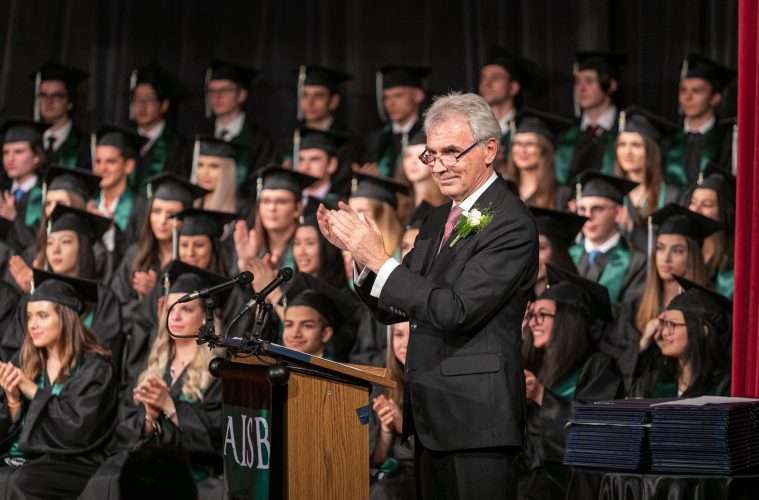 If you weren’t in the AISB theater during senior awards, it ended with Mr. Ian Edwards yelling, “Didn’t you forget something?” That something, of course, was an old, “dusty” diploma–for none other than our departing director, Dr. Robert Brindley.

Dr. Brindley leaves us after five years of massive change–including the construction of various new buildings on campus, including the ELC building, the secondary school expansion, and the much-anticipated design center, which will (hopefully) break ground this summer.

“I like to go into schools which are ready for the next cycle of change,” says Brindley. “They can’t be changing all the time because it takes a lot of energy out of the system. When I came here, the community was ready for change.”

The change Dr. Brindley is most proud of is the ELC, since previously “it was in the wrong place in the school [and] the classrooms were not designed for that age group, as they were normal classrooms.” The new building, which opened in 2017, now boasts two dedicated sleeping/resting areas, an open library set amongst live greenery, a digital atelier, a music and movement room, a gym. “The building sets a different tone for how people work,” Brindley explains.

Another significant change made under Brindley’s watch was the expansion of the secondary school. The addition of extra wings and courtyard allowed the school to get rid of the the temporary classrooms in the portables, and added much-needed common areas for the growing student population. DP students also got a sleek, glass-walled cafe, all to themselves. “These social pieces are very important to a community,” says Brindley.

But perhaps the most impressive and ambitious project that Brindley initiated is the impending design center, which he says is “the educational piece which we needed to add to the school.” Brindley explains that this space will allow curriculum to be delivered in a completely different way. Students will have access to innovative technology and tools to build products and experience hands-on learning in a creative space that will be open to the public 24/7. Expect to see the building being constructed when we return next school year.

With the necessary buildings and resources taken care of, Brindley says it’s time to focus on building community. And he assures us that our new director, Peter Welch, is just the man for the job.

This departure isn’t just the end of Brindley’s tenure at AISB, but the beginning of his retirement. What he says he’ll miss most? “The kids, as they keep [him] mentally young.” The students will certainly miss him as well.

And, finally, the things Dr. Brindley might regret from his time at AISB…

As a joke, Grade 3 Teacher Nadia Wighton asked Brindley if he had any regrets as a director. He, of course, said no; so Wighton polled the teachers. Here’s a list of what some of the teachers (jokingly) thought he might look back at with a sense of remorse:

*If you have any “regrets” you think Dr. Brindley might have, leave them in the comment below; and remember, it’s all in good fun! We wish Dr. Brindley the best in his retirement, and hope he won’t take on too many construction projects! 🙂