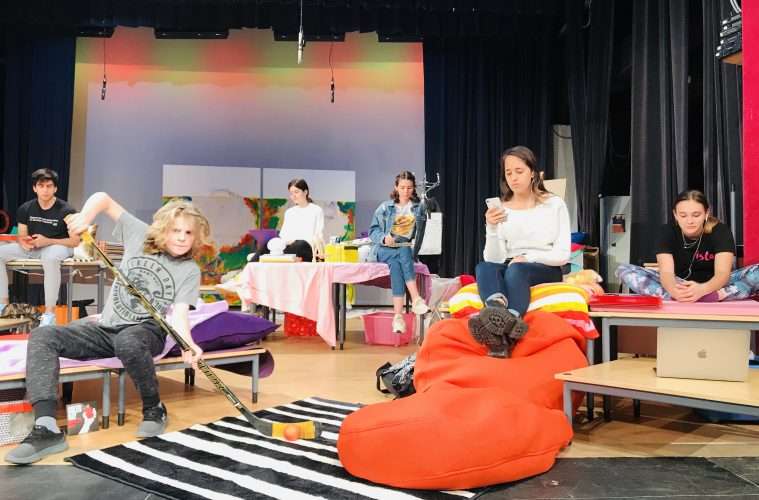 On November 21st and 22nd, a group of high schoolers will perform AISB’s first student-written theater production, Brainstorm. Here’s all you need to know about the play, from its backstory to what to expect.

What is the play about?

Brainstorm is based on a play script developed by Ned Glasier, Emily Lim, and Company Three, arranged by Nick Hern Books. It explores teenage emotions, actions, and brain development, including the struggles adolescents experience as they shape their identity, as well as the common conflicts between parents and children.

The characters’ stories will be unlike any other Brainstorm play, as they are written by AISB cast members. In a relatively small cast of 12 students, some will play parents and others will play themselves, as teenagers.

How was the play selected?

Play Director Alice Williams says that a teacher from last year’s ISTA festival mentioned how Brainstorm was a huge success in their school. After looking into the play, Williams believed it would allow students to blend themselves into the performance.

“Normally, I’ve been doing scripted plays, but I [wanted to] try something different for the high school community,” says Williams. “This play gives you guys the ability to stamp your own identity.”

Building up to the performance

Once the play was chosen, AISB Director Peter Welch visited the theater production team to share his expertise on teenage brain development. With his help, the play developed to effectively convey emotions and underlying messages.

The actors of the play point out that there’s a big age gap between the cast (all 9th and 12th graders), which makes the script quite interesting. This means that the audience will be able to see the changing perspectives of teenagers as they get older.

Cast member Vaida Z. adds that the small-sized cast allowed students to express themselves freely in the script. “It was a very positive community where the students could really express what they do on a daily basis,” he says.

Meanwhile, Backstage Director Jennifer Lawless has been working with a set of students to enhance the sound, lighting, and visual effects of the play. Special thanks to the backstage crew for their incredible work and dedication!

Come watch the play, support our community, and enjoy the evening! We hope to see many of you at the theater next Thursday and Friday.