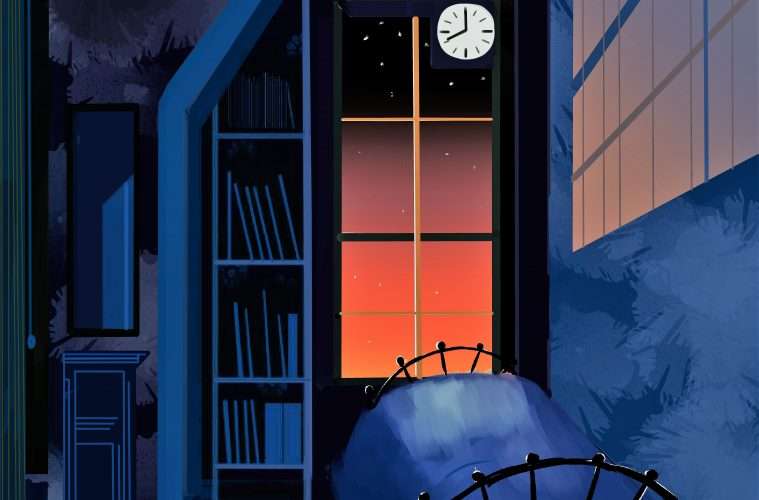 *This “mini memoir” was selected from Selina Parnell’s 6th grade English class to be featured on our website. The assignment was to write about a memory in hopes to “communicate a larger idea about the human experience.” We think Petra did this perfectly.

Fear. It’s the most basic, the most human emotion. As kids, we’re afraid of everything. The dark. The boogeyman under the bed. And we pray for morning. For the monsters to go away. Though they never do. Not really.

It was a cold winter day. My garden was covered in a white, soft carpet, that looked like it was made out of wool. I slowly opened the front gate. The sparkling snow crunched under my feet, as I started walking towards the house.

I opened the door and quickly entered. My hands were freezing, but the warmth of the house warmed them up instantly. I threw my bag on the couch, but it rolled over onto the hard floor. I picked it up, and put it back on the couch, making sure that this time it would stay there.

I ran to the bathroom and started washing my hands. The lavender soap filled the small room with a refreshing smell. Drops of water fell from my fingers, as I reached for the orange towel hanging on the hook. I dried my hands and ran upstairs to my room, to change into more comfortable clothes. The fluffy, light grey sweater I chose was filled with little polka dots, gliding around the soft material.

I ran back downstairs and went into the living room. I grabbed the remote control and jumped on the black couch, covering myself with a white blanket that made me feel like a butterfly, all wrapped up in its chrysalis.

Here I was, ready to relax and watch my favorite TV show before starting all the work that I had to get done. It was so convenient to just sit around doing what every single person would want to do after a day of school. When all of a sudden, I heard a sound–the sound of a creaking door opening.

I immediately grabbed the remote, my body almost controlling my actions, and I paused the TV show. My brain started thinking of all the possibilities: either there was a ghost in my house or a burglar–the type of burglar that you see in movies, all dressed in black, with only his eyes on display to the public world.

I imagined a man, wearing black pants, a black jacket, and a black hood. His mouth would be covered by a bandana that had white, spooky skulls on it. He’d be standing up, head down, facing the floor. His hands by his side, his fists clenched, holding something that looked like a scythe. The scythe was partly red, small drops of blood falling from it, forming a red puddle at the man’s feet.

As I’d slowly go into the garage he would pull his head up, and his dark green eyes would sparkle in the light coming from the hallway. The worst part, oh the worst part, would be the anger in his eyes. Even though I wouldn’t be able to see anything except his eyes, I’d know that he was furious.

As he would slowly bring his scythe up, my brain would tell me to run, run faster than I ever had before. But my body would be paralyzed, not letting me move. Thump, 5%…

All these thoughts running through my head in less than a second. I quickly made a plan to run to the kitchen and get the sharpest knives I could find. Two of them. I imagined them shining in my hands, while I’d hurry out of the kitchen. I would walk up to the garage door and fearlessly open it. And suddenly, I’d have the skills of a ninja and would attack whatever or whoever was in the garage, putting a brave face on.

Honestly, who did I think I was?

I gave up this plan and started walking toward the garage. The door was opened a little bit, just enough for a person to go inside.

I couldn’t see anything inside the room, as it was very, very dark. I took a deep breath. The silence around me was overwhelming. Hesitating, I slowly put my trembling hand on the knob. And as I touched the cold metal, my brain went back to thinking about what could have been in the garage.

Unexpectedly, I thought “Stop,” and all of the bad thoughts that were running through my head disappeared–as if they had never been there in the first place. At that moment, I knew that I could face anything that was inside the room.

I opened the door and turned on the light. I looked, and no one was there; but I was sure I had heard something. I crept inside, the tiles cold on my bare feet. I tip-toed around, searching every space for the source of the sound. But alas, no one. I turned off the light and went back into the hallway.

I was confused, not knowing what had happened, but I decided to continue watching my TV show, letting my thoughts run away. As Riverdale was buzzing in the background, my thoughts aligned, and I realized that I had let my fears run wild. And when I embraced them, the man in the hood disappeared.

This happened a long time ago, but it’s stayed with me.  I remember I used to be afraid of staying home alone; I couldn’t even go upstairs to my room. Now, I’m home alone almost every day, and actually enjoy the solitude.

But I haven’t stopped hearing the terrifying sounds coming from the end of the hallway… and I never will. All I will do is pretend. Pretend not to hear them. Pretend I’m not imagining what else I could find in the garage.

I tell myself to embrace these fears so the monsters will go away. But I know they never will. Not really.

-Petra is a 6th grade Romanian student who moved to AISB in 2017. She loves acting and is currently devouring the Harry Potter series. “At first, I wasn’t excited about writing a memoir, but as I started typing, I discovered that I have a story to tell.” Don’t we all?