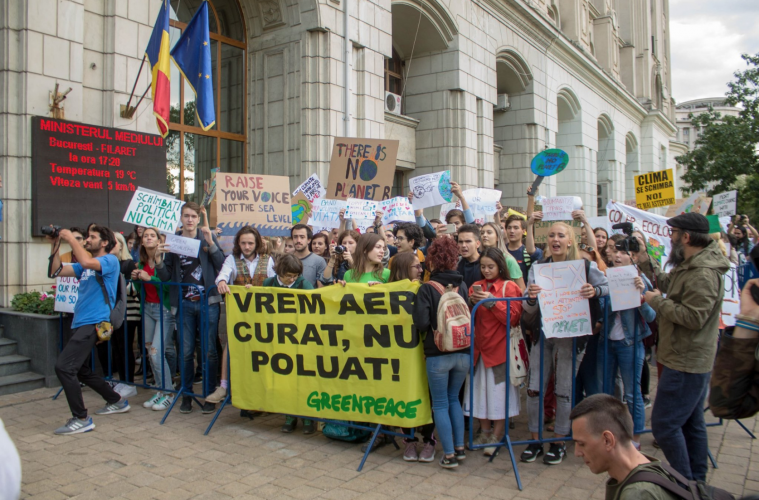 Meanwhile, Bucharest held its largest Climate Strike yet, attracting more than 1,000 people in front of the Ministry of Environment, with plans for another protest tomorrow.

What is the Global Climate Strike?

The movement was started by a 16-year-old activist Greta Thunberg, who, almost a year ago, started a single-person demonstration outside the Swedish parliament, calling for change. Inspired students around the world joined her cause and started holding protests every Friday, initiating the School Strike for Climate.

Related Article: Climate Change: What Are Students Doing to Make A Difference?

The strikes later evolved to include adults, after they were invited by students. The objective of these activists is to push world leaders to introduce action plans that will reduce carbon emissions and prevent further dramatic increase in global temperatures.

“The popular idea of cutting our emissions in half in 10 years only gives us a 50% chance of staying below 1.5 degrees [Celsius], and the risk of setting off irreversible chain reactions beyond human control. […] The eyes of all future generations are upon you. And if you choose to fail us, I say: We will never forgive you.”

The Bucharest Climate Strike, which lasted from 4pm to 7pm last Friday, involved a 40-minute march from the National Library to the Ministry of Environment. Hundreds of students, many of whom had school in the afternoon, skipped their classes to join the strike. Older adults, families, activists from NGOs, and even tourists showed up as well.

A large crowd of passionate activists stood behind the barricades around the ministry’s entrance and chanted, “Vrem aer curat, nu oras poluat” (We want clean air, not a polluted city). At the front, several young leaders from Greenpeace Romania delivered short speeches through the megaphone, addressing the urgency of the climate crisis.

“It felt really empowering to be in a crowd of people that shared the same passion for our planet, but also the same rage towards how the people in power are harming it,” says Grade 9 student Eliza O, who took part in the protest. “I was pleasantly surprised to not only see young people, but older citizens who took time out of their day to fight for the future generations.”

The climate strike also took place in other cities throughout Romania, including Timișoara, Iași, Cluj-Napoca, Târgu Jiu, and Craiova.

The significance of the movement in Romania

Last week’s climate strike served as a symbolic step towards increased environmental action and awareness. Until now, the Romanian government has made little effort to address the climate crisis. Thus, it is more crucial than ever to demonstrate that people genuinely care and regard combating climate change as a top priority.

Although the Ministry of Environment has worked with the World Bank to come up with low-carbon development strategies, actual law enforcements have been minimal. Rather, Romania recorded a 6.8% increase in carbon emissions from 2016 to 2017, which is the 7th highest in the EU.

Further, such protests also encourage youth to speak up about pressing issues as members of society and develop as future world leaders.

Fridays for Future is not solely about going on strikes. For major change to happen, it’s necessary that we continue to fight for climate protection once the protests are over. Below are a few suggestions:

Tell us: What should we, as students, do to prevent the aggravation of climate change? Start a conversation below.