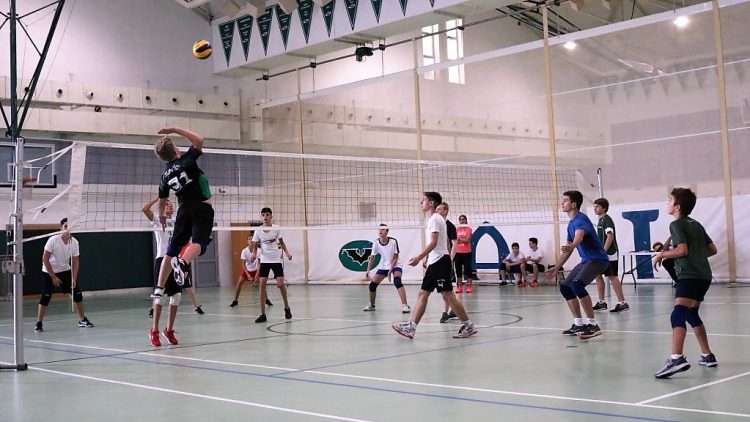 Since the beginning of fall sports season, AISB students have been complaining about the later practice times. Whether it’s not having enough time after practice to socialize, not being able to get homework done on time, or getting stuck in rush hour traffic, students aren’t happy.

According to a survey sent out by The Bite, 60% of possible players didn’t try out for a sports team because of the later start times.

Here’s a look at the current practice schedule: 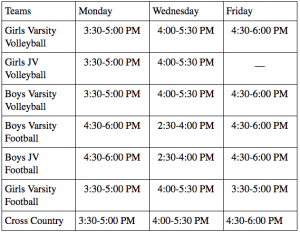 Despite these complaints, AISB Athletic Director David Hughes says, “Our numbers that we have got in teams is up, it’s the first time that we have had a JV high school football team for boys, for years. Our numbers are solid and we haven’t seen that big of a drop-off.”

Hughes believes that the new schedule is a success, as it has allowed students to join one-hour activities even if they’re on a sports team. “We want to get students playing recreational sports, not just team sports; and now we have frisbee and chess and book-club,” says Hughes. “And all of those are able to happen–all those activities that we didn’t run previously, because of this later start.”

He adds that what students do before practice is up to them. They could do their homework or join an hour activity right after school.

While this may be true, many students are still complaining about this “time gap,” and for good reason. In fact, educational journalist Patti Ghezzi said in a Care.com article that “not all kids can focus on homework right after finishing a long day at school.” She suggests that parents and teachers should give children “a chance to play and relax before starting their homework.” This time could be spent playing sports.

According to the student survey, 76% of students said they prefer to do their homework at home, instead of during the “time gap.” Many said this was because they can’t focus during that time, that they would prefer to socialize with friends during this gap, or simply because they “didn’t feel comfortable” completing work right after school.

Another problem with the new practice schedule is that students get stuck in rush hour traffic after practice. For students who live in the city, it can take them hours to get home.

AISB Cross Country Coach Luke Scholtes, who lives in Dorobanti, says that, “Getting home on Friday can take close to an hour, when on a non-practice day I’m usually home within half an hour.”

Daniel Pryslak, the Boys’ Varsity Volleyball Coach, says that the new sports schedule has ended up being worse for him as well. With the teacher buses not running anymore, it’s harder for teachers and coaches to get home. If he takes a local bus, he would need to walk for a while, as it doesn’t stop near his house. Taking an Uber or Black Cab would be expensive, especially with the price surges during peak hours.

Pryslak also thinks the time before practice could easily be a waste. “I think it’s good if students do their work, but if they’re not getting their work done, it could make it even harder to do once they get home.” He also shows concern about students not signing up for sports because of the schedule. “Our sports program is gonna hurt because we’re not gonna have as many athletes putting themselves out there, they’re not gonna grow and it’s frustrating.”

While there are obviously concerns and complains, Hughes, a proponent of the new schedule, is “always open to change and values the voice of everyone that is involved.” He says that if enough concerns are raised, it’s possible the leadership team will make adjustments, or possibly revert to the previous timetable.