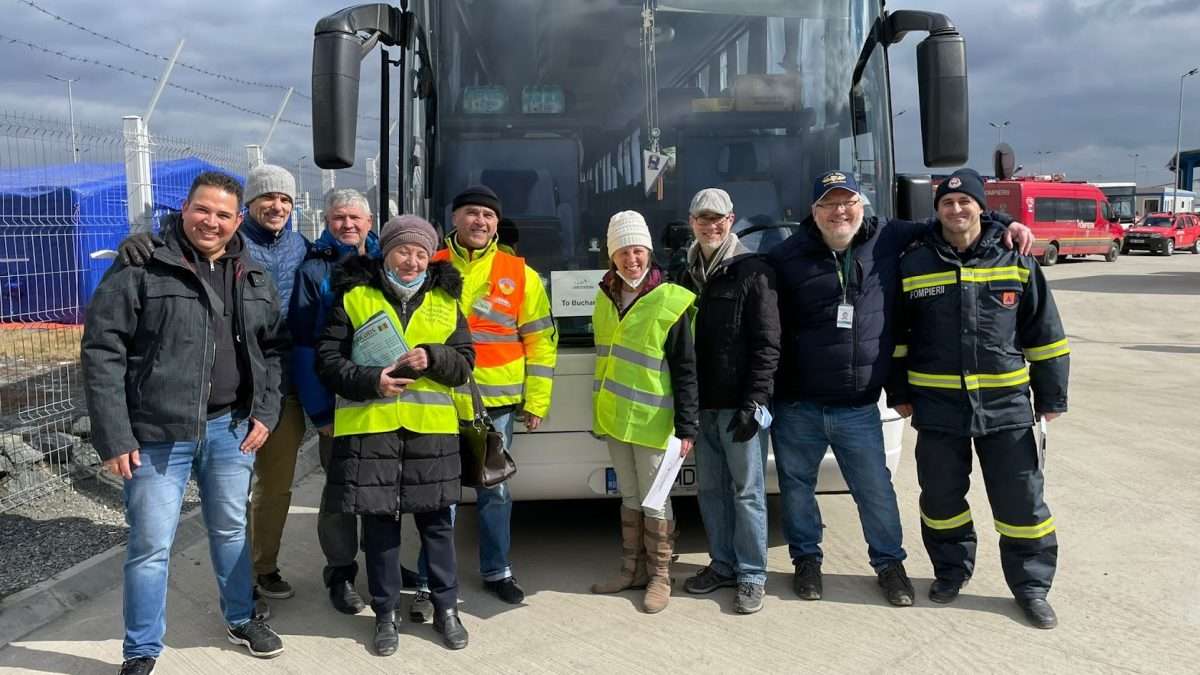 On March 5th, at 6:30am, a group of six teachers (Rita McDermott, Byron Farrow, Peter Stanley, Hanan Abdou, Gustavo Echeverry, and David Starzynski) rented a bus, before even knowing if they were allowed to use it, and drove to the Isaccea border to transport refugees into Bucharest.

Since Russia invaded Ukraine, more than 3 million people have been displaced. And as of March 14th, 412,000 Ukrainian citizens had crossed into Romania to seek refuge.

With this invasion escalating into war, an increasing number of people are fleeing the country, and the local government and NGOs (Non-Government Organizations) are struggling to keep up—especially when it comes to transportation. Because of this, ordinary citizens have been driving their cars to the borders to return refugees to government housing centers, train stations, and even their own homes.

McDermott, who saw a Facebook post putting out an “urgent call” for drivers, decided to help how she could, and gathered the team of volunteers. “Most of my life I haven’t had a car,” she says, “I wanted to do nothing but drive and follow.” But when she got the call at 8pm to leave at 6am, she became the point person for the 50-seater bus.

Arriving to the Border with ‘A Lot of Uncertainty’

At 11am, the teachers arrived at Isaccea, the small town in Tulcea County, separated from Ukraine by the Danube River. They had 45 minutes to prepare themselves before a ferry was due to arrive on Romanian shores.

The teachers quickly registered their license plates, make and model of cars, and phone numbers with the police, then moved on to logistics: how to document everything, how to find out whether or not the refugees had housing options, if they needed flights, etc. “We didn’t know what to expect,” says McDermott, and there weren’t any NGOs around to ask for help—only police, firefighters, and ordinary people like themselves.

But they figured out what they needed to and joined the other volunteers in bright yellow vests.

“There’s no way I should be in this vest right now,” McDermott remembers thinking.

Around 11:45, translators brought over the refugees, who rushed to get their bags onto the bus and get inside themselves. In total, the teachers were able to transport 47 people—all of whom were women and children, with the exception of one man. Of the refugees, 36 ended up on the bus, while 11 were taken to Bucharest with the teachers who brought their cars.

A Return Trip for the Teachers, the Start of a Long Journey for Refugees

To leave the border, McDermott had to gather the information of every person they were transporting. This included the names, number of adults and children in the group, and if the families needed housing and for how long. The teachers scrambled to find ways to communicate—using Google Translate, phoning a friend who speaks Russian, and relying on one of the passengers’ ability to speak some English.

As the refugees settled on the bus, the panic from earlier began to fade, and fatigue set in. The bus got quiet as people took the time to catch their breath after the gut-wrenching journey they had been on to leave their homes—a journey that for most was far from over.

Abdou walked the length of the bus offering people food. McDermott gave colored markers and blank pieces of paper to children. One of the kids drew the Ukrainian flag: a heartwarming gesture that needed no translation.

Although most of the refugees wanted to get to the train station or the airport and had plans to leave Bucharest, the teachers tried to convince them to stay in Bucharest, even for one night. “They’re so new in this journey of displacement,” McDermott explains. There were so many people, she says; flights were booked, bus rides were long. “It made more sense to stay the night and process what came next.”

But most wanted to continue on, making their way west, to places like Budapest or cities in Germany. Others wanted to go east, taking the bus to Turkey. Official reports show this to be the case for most refugees crossing into Romania, as from the 412,000 refugees that have entered the country, only around 80,000 have decided to remain.

A few travelers from the bus ended up staying at a Baptist church called Biserica Baptista Sfanta Treime for the night. One woman decided to stay with another AISB teacher, Laura Coraci, after originally wanting to stay at the airport. And Echeverry ended up housing the family who rode in his car—helping them get train tickets to Budapest a few days later. None were able to leave Bucharest once they arrived, as all trains and flights were booked.

Stanley had tried to make it to the airport in time for a mother and son to catch their flight to France, but it was not possible. They ended up staying at their house for the night. “The car ride was really tense for the mom,” remembers Stanley. She was on the phone for most of it with her husband: a recently retired army colonel who had to go back into active duty. Her son also had to enlist, and her grandparents were too old to travel.

“So they were all sitting in Odessa, staring at warships off the coast while she was on the phone in my car,” says Stanley.

But that night, using Google Translate, Stanley’s son and the young refugee communicated and played through the night. The mother said it was the first time she’d seen her son smile in three days.

What the Future Holds

The teachers had planned to return the following weekend, more confident and prepared. But they learned just one day before leaving that volunteers aren’t allowed to offer rides anymore.

McDermott was forwarded an update from the border, via a volunteer named Cezar from the ‘United for Ukraine’ Facebook group. Written in Romanian, the English translation reads that because of human trafficking concerns, ISU (the Inspectorate for Emergency Situations) decided that only NGOs are allowed to provide transportation. In the post, he mentions that he agrees that “there are dangers and risks in the transport process with volunteers,” but that a better solution, involving vetted volunteers, would be a better solution.

Because right now, without NGO presence at the Isaccea border, there is no one else to transport these refugees.

Stanley says that in their experience, the police were diligent at the border, taking pictures of people in cars, their passports, and collecting license plates and documentation on the way out. But “human trafficking is shockingly present out there and at any borders right now,” he adds.

The head of communications for the United Nations High Commissioner for Refugees (UNHCR), Joung-ah Ghedini-Williams, explained to reporters that human trafficking is of particular concern right now, as most all of the refugees are women and children. “These are the kinds of situations that people like traffickers … look to take advantage of,” she said.

According to McDermott’s own insights, there were some skeptical individuals at the border, such as men offering free transport all the way to Austria. The group was careful not to put things like “Teachers for Free Rides” on posters, or anything that could be copied by potential traffickers. They had also been told stories about people offering free rides to people then taking them to a private location to ask for money. If they didn’t have it, they’d be forced to work until they could pay off their debt.

The group knows these are real concerns, but they are also concerned about the lack of NGO presence. The problem with limiting volunteer help is that there is no one else to transport these refugees. “One of the reasons we decided to go was because we heard firsthand accounts of women and children waiting in the cold at the border for hours and even through the night,” adds McDermott.

Currently, the group is trying to find a way to help refugees with transportation in a way that still abides governmental laws.

“It’s frustrating,” McDermott says. “We can’t do what we know we can do.”

While the refugee crisis is quickly evolving, we could only confirm that the Jesuit Refugee Service (JRS), in collaboration with Project Dynamo from the US, is aiding with border transportation. If you’d like to help, consider volunteering to JRS Romania.

Pictures provided by the staff members listed in this article. Additional reporting and editing by The Bite’s advisor, Ms. Jennifer Stevens.