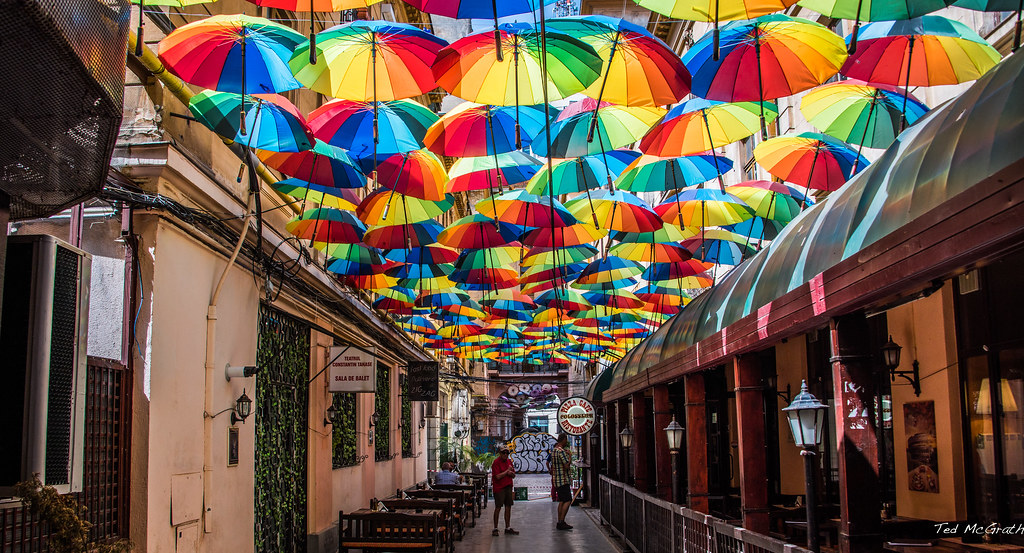 It all started in October 1994, when Professor Rodney Wilson came out to his history class. He was teaching students about the Holocaust, and mentioned that if he had lived in Germany during World War II, he would have likely been imprisoned by the Nazis for being queer. This marked the first time a K-12 teacher identified as openly gay in the state of Missouri.

The reaction inspired Wilson to write an article about gay history, which was published in the Missouri Society. Then he organized a gay film festival—the start of what has now become an annual celebration of LGBTQ history.

This October, we want to highlight Romania’s own history with the LGBTQ+ community, while also focusing on the future, which lately seems much brighter, thanks to local nonprofit groups.

The criminalization of homosexuality under communism

Lack of warm water and heat, TV available only for two hours a day, endless lines for a few oranges: this is how communism looked for the majority of Romanians from 1947 to 1989. Under Nicolae Ceaușescu’s rule, people lived day by day.

Besides the limited access to basic rights, the laws he endorsed were inhumane and unreasonable. According to Vice.com, as soon as Ceaușescu recognized that homosexuality existed, “he deemed it illegal” and punished it with prison time. Furthermore, a report conducted by Human Rights Watch and IGLHRC found that he took advantage of the anti-gay law to throw in prison anyone he considered “rebellious.”

There were people who were “out and proud,” but they managed to do so because they had protection from somebody within the system. For example, Dr. Mita Baston’s father worked in the Central Committee of the Communist Party. “Everyone knew he was queer,” reports Vice.com; people would see Mita on the streets wearing bright, colorful dresses, not afraid of repercussions.

Moving towards a discrimination-free country

After Ceausescu’s assassination in 1989, laws, as well as mentalities, began to change. Accept is the oldest LGBTQ+ organization in Romania, having started in 1996, when relationships between adults of the same sex were decriminalized. “There were very few people in the beginning, and mainly expats, because Romanians were still scared to expose themselves, ”says Accept Project Coordinator Luca Istodor.

This non-profit organization advocates for LGBTQ+ rights, provides legal and psychological counseling, and organizes events such as Pride and LGBTQ History Month. “We fight to change certain laws so that marriage between same-sex couples is recognized, or we try to make it easier for trans people in terms of changing legal documents,” Istodor explains in an enthusiastic tone.

Bucharest Pride, formerly known as GayFest, is an annual festival dedicated to LGBTQ rights. It’s organized by Accept and premiered in May 2004. It features various events, such as film screenings, parties, art exhibitions, and culminates with the Diversity March.

Unfortunately, “people were beaten or got stuff thrown at them at the first Pride events,” says Luca, but he assures us things are getting better. Bucharest Pride, for example, went from a few hundred participants in the first years to 10,000 last year. “It [has become] a celebration that brings many people together,” he emphasizes.

Considering Romania’s social and political background, the country has evolved tremendously. As such, Romania was recognized by Human Rights Watch in 2006 as a country that has made “exemplary progress in combating rights abuses based on sexual orientation or gender identity.”

Much of this is due to the increase in nonprofit groups like Accept, and Istodor explains that LGBTQ organizations are beginning to pop up around the country, such as The Identity Education in Timișoara and Rise Out in Iași. “For so many years, activism was only centered in Bucharest, and now many more local communities have the chance to express themselves,” he says.

Intersectionality and marginalized groups as part of History Month

A program with over 100 active volunteers, Accept has organized a ton of events this October, from workshops tackling queer rights and mental health, to online film projections about intersex identity and theater performances by Giuvlipen, a Roma Feminist group.

“We are focusing on intersectionality and marginalized groups this year,” says Istodor. One can hear his excitement as talks about how this program “highlights some issues of especially vulnerable people in our community.” One notably important event is the release of “Un spațiu doar al nostru,” an anthology of 20 queer love stories, coordinated by Istodor.

We highly encourage you to check out Accept Romania’s Instagram account (@acceptromania), as well as @unspatiudoaralnostru for more information regarding the activities that are taking place this month, or if you’re interested in counseling.

There’s still work to do: The road ahead

It’s important to celebrate all of the progress Romania has made in recent years, but we also have to be mindful that the LGBTQ community is still fighting for equal rights. The 2018 referendum aimed to change the constitution’s definition of a family is proof of that.

Since 2016, the Coaliția pentru Familie (Coalition for Family) has been trying to modify Article 48, to replace the word “spouses” with “a man and a woman” in order to “preserve traditional family values.” Fortunately, their efforts have not been successful.

But even though the referendum did not go through, queer couples are still facing hostility throughout the country, as same-sex partnerships are not recognized in Romania. A recent survey by the Romanian Institute for Evaluation and Strategy found that homophobia is still “rampant” in the country, reporting that three-fourths of respondents claimed “not to trust homosexuals.” Additionally, 59% said they “wouldn’t accept a gay relative,” and 52% “wouldn’t be friends with a homosexual.”

Two years ago, AISB got its first LGBTQ+ group called Pride. And since then, a middle school club “Accepted” has formed—both with the aim to support the rights of the LGBTQ+ community.

MYP Journalism Teacher and Advisor for the high school Pride group, Jennifer Stevens, says that the establishing the clubs was not easy, but that it was necessary. “The counselors and I had students crying out for support,” she says. “It was incredibly important to us to create a visible group like Pride, to show the AISB community that we indeed have a queer community. And not only that, but we have allies to support that community and demand acceptance.”

Since then, not only has AISB gained LGBTQ groups, but the CEESA community has come together to recognize the queer community, with its first-ever CEESA Wide Pride event, hosted at the International School of Prague last year. Pride member Ioana D was able to attend, and says it was “an amazing experience that brought together passionate students, teachers and counselors in a 2-day conference, promoting acceptance and allyship.”

Stevens says she’s proud of the students and what they’ve done in a short amount of time, like last year’s digital Ally Week. “But there’s still a lot of work to do. We want to normalize the queer community and encourage understanding and empathy.”

And this is hopefully where the future is headed: a global effort to understand and accept.

If you’re interested in joining AISB’s Pride or Accepted groups, contact Ms. Stevens at jstevens@goaisb.ro. And if you want to fight for social justice on your own, remember that you’re never too small to make a difference.

Tips on How to Work/Study from Home While Distance Learning