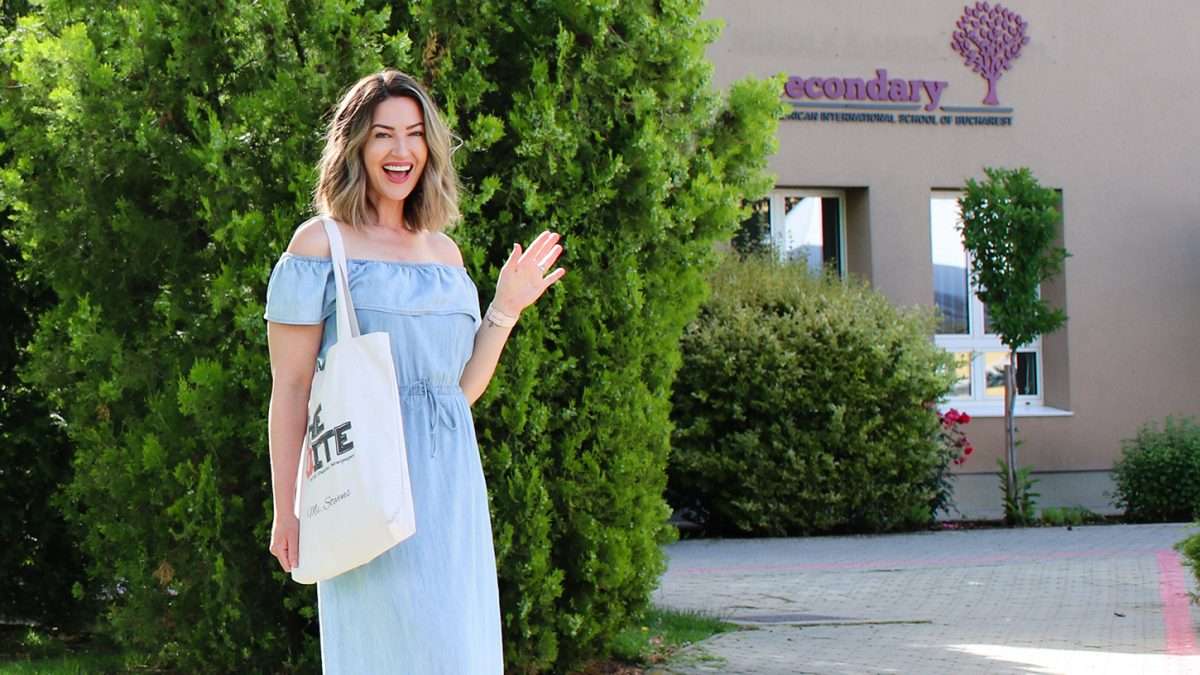 Upon her arrival to Romania, Jennifer Stevens had no idea that she would spend the next five years building an internationally-recognized journalism program.

Her initial plans were to work as a freelance writer while her husband, Luke Scholtes, worked as a chemistry teacher at AISB. But after former secondary principal Jonathan Cain saw Ms. Stevens’ resume, he also saw an opportunity to offer a new elective class for Design students.

Ms. Stevens started off as a part-time employee, teaching one 9th grade class and one 10. She thought a 40% contract would be the perfect pairing to her freelance writing business, but it quickly became her full-time focus. “Teaching is not like a 9 to 5 job,” she says. “You can’t go in, punch your card and then leave. At least for me, it’s all-consuming.”

Infinite hours of work and devotion turned into a functioning website for the school’s first student newspaper, along with engaging lesson plans and an MYP curriculum she created from scratch.

“There was no real model or expectation for what to do,” Ms. Stevens remembers. “So I treated the class like a startup publishing company.”

The students’ first assignment was to participate in a name and logo competition to set the identity of the newspaper. The community voted on their favorite, and this was the beginning of The Bite.

When the website was launched about two months later, Ms. Stevens sent the link to the entire AISB community and things took off from there.

“In the beginning, students weren’t really that excited about the website and didn’t really see the purpose of a journalism class,” Ms. Stevens remembers. “Then, when they started getting published and seeing their bylines, things quickly started to change.”

Later that year, The Bite was featured in Affinity Magazine for its March for Our Lives protest and students became more involved. The next year, AISB got its first LGBTQ+ club because of an article former student Mara Toma wrote. Then, something happened that not even Ms. Stevens expected: BBC reached out to republish one of The Bite’s stories: a first-person article from alumni Aries Brown on what it felt like to be black at AISB.

Needless to say, the journalism program has become a driving force for change within our community and within Romania. The class has become a favorite for 9th and 10th graders and a CAS opportunity for DP students.

“I’ve been wanting to take journalism since I heard about it in sixth grade,” says one of Ms. Stevens’ current 9th grade students, Petra P.

Ms. Stevens’ Journey as a Teacher

Ms. Stevens’ teaching career began in a kindergarten classroom in Seoul, South Korea in 2009. She laughs as she recalls her first few months: “I had no idea what I was doing.”

She had never planned to become a teacher. Before moving to Korea, she was working as a writer for a publishing company in Tampa, Florida. But because of “The Great Recession,” she was laid off. She thought going abroad would be a good idea—planning to return after a year, to a better economy and another writing job.

But one year turned to 1.5, and then she went on a solo backpacking trip through Southeast Asia, where she met international school teachers. “I had no idea you could do that,” she says. And so after three months exploring and “soul-searching,” she returned to her hometown in Florida and enrolled in a program to get her teaching certificate.

During her program, she was lucky enough to get a job teaching 7th grade language arts, where she learned that she actually loved the classroom—and actually loved educating teenagers. She’s since taught in Bogotá, Colombia; Shanghai, China; and now Bucharest, Romania.

“Never in a million years did I think I would be a teacher,” says Ms. Stevens.

Growing up, Ms. Stevens struggled in school. Due to lack of medical diagnosis (she has ADHD), she was often labeled as “too talkative” or “having an attitude,” which later left negative memories surrounding her school life. She says she often felt stupid—not able to concentrate on lectures and scoring poorly on her exams.

It wasn’t until Ms. Stevens got into her creative writing program, where lectures were replaced with small workshops, that she started liking school.

“Writing was always the only thing I knew I was good at,” says Ms. Stevens. “I’ve always second-guessed myself as a teacher.” This is why she doesn’t really identify as a teacher, but more of a coach, or an editor.

A Class Like No Other: A Different Approach to Teaching

The year before moving to Bucharest, Ms. Stevens was working as a web editor and food writer for an English-language magazine in Shanghai; so when it came to starting a new journalism program, she did it the only way she knew how: by treating the classroom as a newsroom.

She addresses her students as if they were employees for the student newspaper and keeps them on tight deadlines while allowing the student voices to be heard. “I feel like I run a publishing company,” she says while smiling.

In her class, students create their own grading criteria, pitch their own article ideas, and can produce content from a wide range of media options. This comes as a shock to many students who are used to conventional teaching methods, and many struggle at first with the amount of freedom and responsibility.

Fostering an environment where real and meaningful learning takes place is one of Ms.Stevens’ main concerns. “This type of learning should be the future of education,” she claims. (Listen to her podcast interview where she talks about this in detail.)

This work environment has pushed her students to produce high quality content about important issues, like racial justice, medical corruption within Romania, and, of course, the war in Ukraine. It’s also allowed students to branch out and produce humorous podcast episodes, videos on where to eat in Bucharest, and even a student-run Instagram account.

Hard work and dedication hold great importance to Ms.Stevens, and she can often be found bragging about her students’ articles or leading “staff meetings” where her students share their published work and exciting upcoming projects.

What Students Have to Say

As former student Omotoyosi Ariyo (shown above, far right) puts it, “Ms. Stevens was the sort of teacher you went home to tell your parents about after your first class with her. There’s an energy she exudes that fills the whole room—this sort of gentle liveliness that makes you think, ‘Oh, we’re in for a fun class today.’”

Omotoyosi was one of Ms. Stevens’ first writers, then copy editors, and then was her first student leader for CAS Journalism. She says these opportunities allowed her to develop skills that weren’t focused on other classes: “the ability to command language, critically analyze media, and create content without any real boundaries…[it] really changes the way you look at media for the rest of your life.”

While working with Ms. Stevens, Omotoyosi wrote and edited several very important articles, including her extremely popular “Black Lives Matter: An Open Letter to the AISB Community,” which was shared and discussed widely among international educators.

Another student, 11th grader Iulia P, says that Ms. Stevens inspired her to “discover a passion for activism back in 9th grade.” She explains that through journalism (especially writing articles related to the Colective nightclub fire), she “became so passionate about speaking [her] truth and wanting to make a change in the world.”

Iulia explains that by being able to pitch her own article ideas and have the freedom to explore topics and issues, she was able to write about (and discover) what mattered to her.

“[Journalism] fostered my desire to make an impact in the world and I grew tremendously as a writer,” she says.

“It taught me to never bury my lead,” she adds, “which has helped me in relationships with friends, in acting, or other domains—to always look for what matters the most to me and let that guide me. It taught me how to ask the right questions and, I’d say most importantly, it helped me appreciate our uniqueness as humans.”

Class of 2021 alumni Gunel Akhundova echoes these sentiments, and recently returned to Ms. Stevens’ classroom to take on another assignment: covering this year’s high school graduation.

Gunel was Ms. Stevens’ first marketing manager and is now using what she learned in her classes at university. “Journalism didn’t feel like a class,” she explains. “It felt more like a real job that gave me work experience. The work that we did in journalism felt so impactful, especially with the current events articles that we put out at the time…seeing the outcomes gave me an immense sense of pride.”

What’s Next for Ms. Stevens and the Journalism Program

After five years of living in Romania, it’s time for Ms. Stevens (and her husband Mr. Scholtes) to say goodbye to AISB.

“I don’t think I can give anything else to this program,” she says. “My job here is done.”

Ms. Stevens will become a “digital nomad” and continue to feed her adventurous side by traveling. She’s also planning to write a book about her time abroad. Mr. Scholtes will be online tutoring and creating science video content.

The couple will begin their new chapter by first settling down in Italy and then Croatia— two places very dear to their hearts. “Six years ago, Mr. Scholtes and I took a 6-week trip to these countries…it’s when we knew we wanted to spend the rest of our lives together.”

As changes occur within Ms. Stevens’ life, the same goes for the journalism program. Next year, English Teacher Chuck Adams will take over teaching the 9th grade class and leading CAS projects, while Design Teacher Erik Peterson will teach 10th grade and will be in charge of publishing.

Both seem excited for the opportunity, but admit there are big shoes to fill. Mr. Erik says that he has been “blown away” by the work published on The Bite over the years and is eager to continue Ms. Stevens’ legacy. “I just wish I’d spent more time learning from her,” he admits.

The hard work and dedication that Ms. Stevens has put into this program is unimaginable and her students will be forever grateful for her class. Thank you, Ms. Stevens! We wish you all the best in this new stage of life.

Exploring the Religious Buildings Of Bucharest