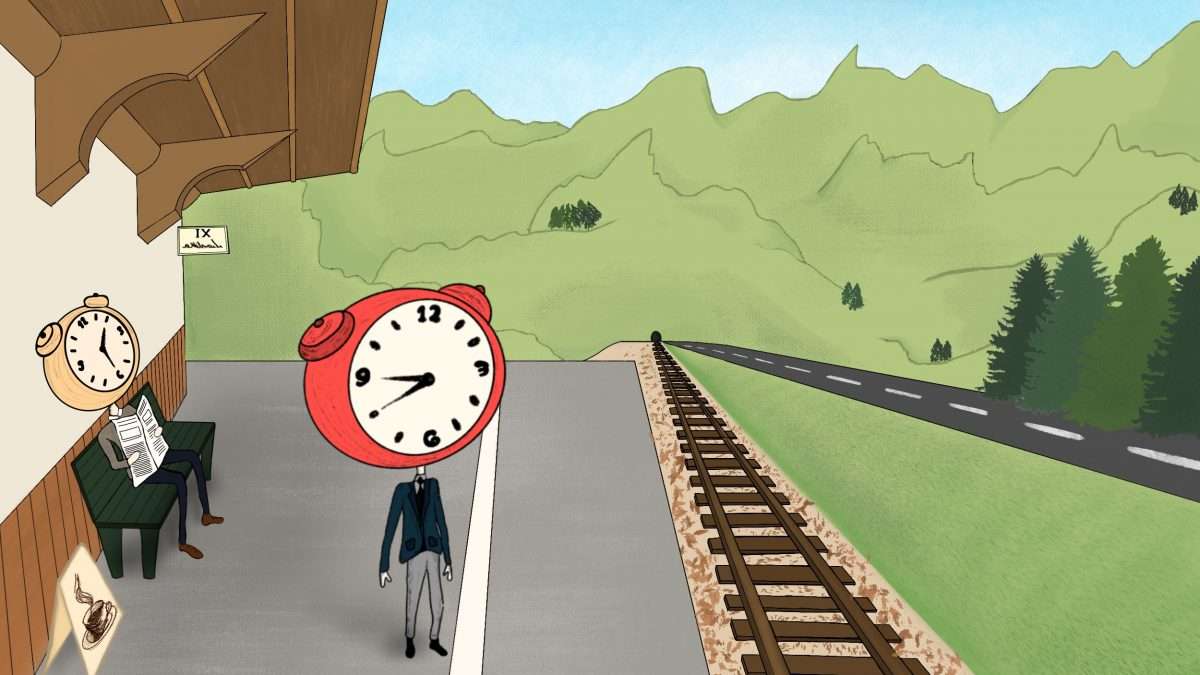 This creative writing piece was selected from Mr. Chuck’s 9th grade English class to be featured on our website. The assignment was to write about a true event or experience, while incorporating fictional elements to create a magical realism narrative. We think Smaranda did this perfectly.

Running, pushing everyone out of my way, I leaped onto the nearest train, just before the doors closed.

9:01am. The train left. I got the window seat. I put my headphones on and played “Bolero” by Maurice Ravel. I noticed the hills appearing, one by one, getting bigger and bigger with every beat of the song, and every instrument added. It was almost like they were dancing, paired up with the sky, the horizon line being the only thing that kept them from embracing one another.

Someone tapped my shoulder. I heard a deep voice: “Tickets, please.” I turned around, leaving the hills behind, and I saw a man, dressed in the usual blue uniform of a CFR train conductor. He had an old, vintage, gold-plated type of pocket watch that he took out and checked the time. Really unusual for these times.

I handed him my ticket. And after a long stare, as if the ticket was written in illegible hieroglyphs, he said the six words that crushed me: “Miss, you’re on the wrong train.”

I panicked. I looked around for anything that could help me prove that he was wrong. There was no time for this. There must have been something, maybe another train ticket, or a note that said the train gate, a familiar face… nothing. But then…time. Time always solves everything.

“Sir, I remember pretty well, that this is the only train at…”

But as soon as I looked back at him, his face was gone. Everyone’s faces were gone, now replaced with screens. On each screen, there was a clock, similar to the conductor’s golden pocket watch. I stared at the wagon display and noticed: Final destination: Bucharest.

I was on the wrong train.

The clocks were now ticking all around me.

I examined every face, both analog and digital, and noticed that, unsurprisingly, the clocks weren’t moving at the same speed, nor in the same direction. My hands were now shaking. I couldn’t breathe; my anxiety turning into a long, infinite train cable, strangling me to death.

I ran to the bathroom, away from the madness, and stared into the mirror. I was one of them. My face, now replaced with a screen. The time: 9:32am.

I didn’t have time to be scared.

I didn’t have time.

I was walking through the train wagon, waiting to get off the train. All eyes on me.

The ticking stopped. I looked around. The screens were changing, one by one. On each one of them was now written in big, red, capital letters the word “late.”

I closed my eyes. I closed my eyes to escape reality, to escape this nightmare. I felt like I was floating, falling, and standing still at the same time. A buzzing sound in my right ear was getting louder and louder. I wanted to scream that I wasn’t late.

“Excuse me, miss, could you please tell me what time it is?”

In front of me was a little boy. A normal little boy: no screen, just his face.

The train slowed and a crackling voice came over the intercom: “Acum ajungem la Brașov.” On the display, in capital letters: BRAȘOV.

I still had a lot of time…