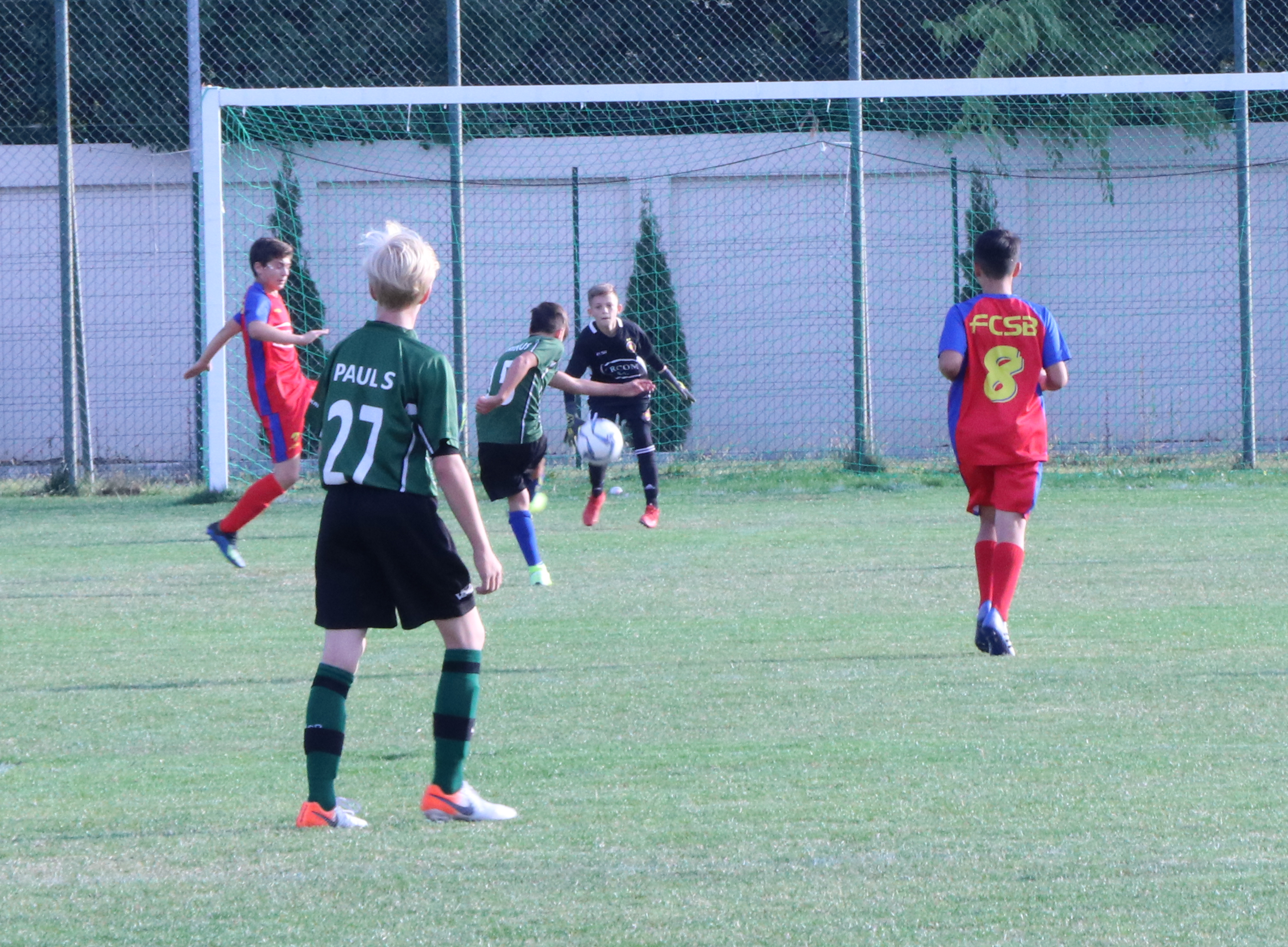 AISB’s middle school varsity boys football team won 2-1 against FCSB 2006 (Fotbal Club Steaua București) in an explosive match on Thursday, October 10th. As FCSB 2006 is one of the most celebrated clubs in Romanian football history, this was a huge win for the Vampires.

And so it begins…

As soon as Steaua kicked off, they played a possession game, dancing the ball around both the pitch and players, passing quickly and moving around. In return, AISB played a very aggressive style of defense, where our players pressed up to the Steaua players and did everything they could to get the ball. But the Steaua players were either too good or had anticipated this move because as soon as a Varsity player drew near, they flicked the ball around the player and onto the next man. This would continue for quite some time before 8th grader Sam J. stepped in to take the ball.

The Vampires rushed down the field, and Ruben M. was able to take a shot–only narrowly missing the top right corner. The Vampires’ attack was now in full effect, and only a short while later, Charlie K. took a shot at the keeper, who was forced to make a diving save reminiscent of something Manuel Neuer would do.

The first third came to a close as a pretty even game, neither side scoring, neither side having anything to celebrate except the keeper’s clean sheet.

A Strike From Our Own Ronaldo

As the second third began, the players began to make more than three touches, leading to a less dynamic but more offensive style of football. As soon as FCSB got the ball they were passing and dribbling, rarely losing control. They put in a cross, only to have it rebounded out of the keeper’s box.

Meanwhile, the Vampires team would get in on goal only to lose the ball on the final pass. Steaua kept pressing, sending in another cross only to have it prevented by Sam J. Yet FCSB kept pressing, finally getting a shot at goal, only to hit it at the keeper and have their chance squandered yet again.

Finally, after all the hard work our players had put in, there was something to celebrate. Emil S. received a pass and smashed it top right corner from 30 meters out. The score was now 1-0 and all the Vampires had to do now was defend their lead–something which they were beginning to have trouble doing.

Once more, Vampires were on the attack. Emil took another shot, only to have it saved by the FCSB Number 1. It seemed as if the keeper was on high alert, only now understanding the full potential of our team’s shooting and passing.

As if in revenge, FCSB’s goal was almost exactly like ours: a shot from outside the box into the top right corner, where the keeper couldn’t reach. It seemed as if all our hard work had been wasted, right in the last two minutes of the second third.

Would the Vampires come back? Or would it be FCSB who would exploit the momentum gained by their new goal? This final third would be decisive; there was still more game to play, more opportunities to exploit.

This last third would be full of opportunities, shots, and saves. But it would also be full of relief for Vampire supporters and dread for FCSB, because now AISB was out for blood.

It seemed as if the goal had motivated our boys, making them hungry for the win they deserved. Shot after shot came from both sides, neither conceding, neither able to finally celebrate. At least, that’s until Max S. came along. He slotted the ball into the net with his left foot, just after a brilliant passing play.

Soon after, the game ended with the final score being 2-1 to the Vampires, with supporters from both sides cheering. It had been a gripping illustration of how football is, and always will be, ‘the beautiful game.’

“The Middle School Boys played their first-ever 11 v 11 game as a team against FCSB on our own school grass pitch. On a warm evening with lots of space to cover a fantastic team performance ensued. It was great to see students from Grade 6, 7 and 8 working together and displaying respect and support for each other as they took on a far more experienced visiting team.

The opening ten minutes were scrappy with many passes going astray from both teams. Confidence was the key to what was to follow from the Vampires. As they began to realize they had more time and space on the ball than they were used to when playing smaller sided games, passes started going to feet and attacks started to develop. Emil scored the opening goal with a fantastic long-range shot after a period of sustained pressure and many chances. An equalizer from FCSB just before half time did little to dampen the Vampires’ spirit as they realized that collectively they were good enough to match such esteemed opposition.

In an extremely equal second half, where there could have been more goals at both ends, Max won the game with a fine left-foot finish. Groups of parents from both teams as well as players and coaches who had stopped to watch from the adjacent pitch applauded the end of a wonderful game of football.”

Quote Of The Day

It is refreshing to see a club team value their training and going against a school team and knowing how to manage that game so that it is beneficial and challenging for both sides. It is great to see Romanian coaches understanding the value of provocations against the value of the final scoreboard – great football from both sides! – Co-Curricular Activities Coordinator Alex Sota.

Apologies for the late report. With October break, then parent-teacher conferences, and Spirit Week, it’s been more than a little hectic (we’re sure you can relate!). But our middle school boys’ team deserved a write-up for their hard-earned win. Congratulations!