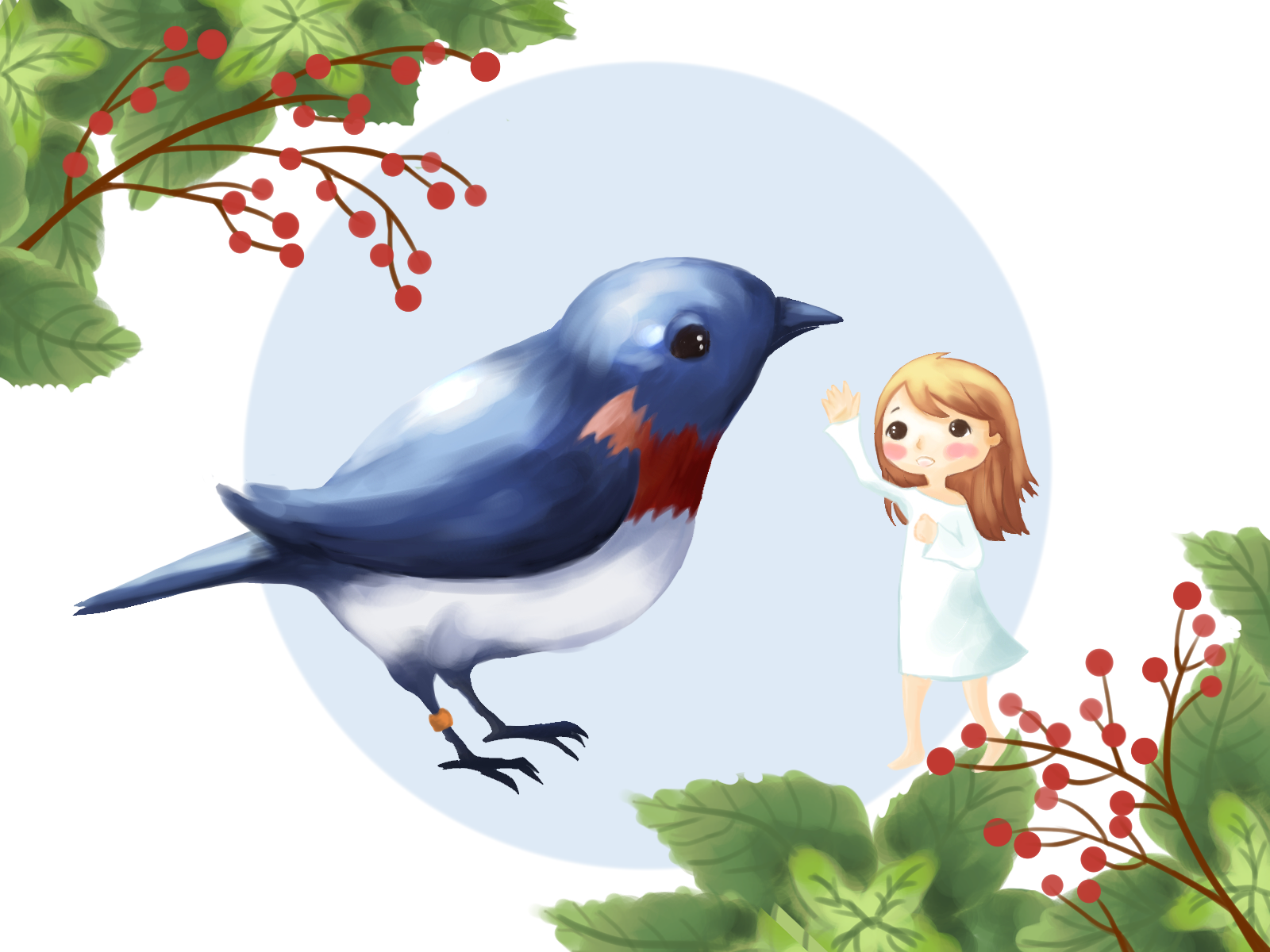 *This “mini memoir” was selected from Chuck Adams’ 6th grade English class to be featured on our website. The assignment was to write about a memory in hopes to “communicate a larger idea about the human experience.” We think Lydia did this perfectly.

About two winters ago, I was happily watching little birds no bigger than my hand eat red berries off the bushes in our backyard. It made me feel happy we were providing food for other animals, especially the little birds, who could hardly get more than a worm a week because the bigger birds always threatened to eat them. I could tell they were thankful.

I adored one that came so often. He had this orange twist tie around his ankle and could not seem to get it off. I tried to take it off many many times. He always flew away, but still came to eat.

The following summer, I was at my friend Irina’s house, drinking lemonade with plenty of fresh mint. I loved the mint–it grew wild in Irina’s backyard and was wonderful. Maybe the red berries provided food for the birds, but the mint provided food for us, and it was perfectly safe.

After we’d finished our drinks, I heard her doorbell ringing. Irina’s mom got the door, and minutes later one of the compound workers came in the house with a huge plastic bottle connected to a tube connected to a nozzle and began to spray the plants. Irina and I had no idea what was in the bottle, for the liquid inside was clear like water. We let him spray.  We later realized that he was spraying pesticide.

Strong enough to kill ALL the small birds that ate berries in our garden.

Strong enough to ruin all the mint in Irina’s garden.

Winter came faster than it ever had before. And just like I predicted, the birds came to eat.  Just like before, they ate from the bush, berry after berry. I ran outside and shooed them away, kicking the bushes to get them out.

But it was too late.

The next day I found two of the birds on the ground. One dead, his body cold and not moving. The other, my little friend with the twist tie around his ankle. He was barely breathing, on the ground. He stared at me with his tiny eyes. I couldn’t say anything. I couldn’t think properly. I just scooped him up in my hands, brought him home and tried to save him.

I made him a bed using one of my doll’s model sets. I supported his head to feed him and give him water from a syringe, but I felt like nothing was enough; nothing I could do could save him. I could see he was sinking. I knew he would die soon. There was nothing I could do except remove the twist tie around his ankle–to free him of everything bothering him.

The next morning he was dead. A victim of the pesticide, poisoned berries. I wept. This was animal cruelty!

What really bothered me about his death was how stupid we humans were, thinking that when we sprayed the pesticide, we would only kill the bugs that ate the plants.

The next summer, Irina and I tried to make lemonade with mint, just like we used to, only to find that it gave us massive stomachaches. I tried to complain to the compound manager, but to no avail. And even though they don’t spray the plants anymore, the presence of the poison is still there.

The little birds don’t come anymore. They haven’t in a long time, and I don’t think they ever will.

-Lydia is a 6th grade student from Canada. She loves animals, and her favorite thing to do is to practice gymnastics with her adorable dog, Scout. Writing this essay has allowed her to speak her mind about animal rights and she hopes they get treated better in the future.